Be The F1RST to Experience Norwegian Prima

Norwegian Cruise Line, the innovator in global cruise travel with a 54-year history, has unveiled exciting new details about its most-anticipated cruise ship, Norwegian Prima. Launching in summer 2022, Norwegian Prima will be 965 feet long, 142,500 gross tons and able to accommodate 3,215 guests at double occupancy. She will offer the largest variety of suite accommodation categories available at sea (13), largest-ever NCL inside, ocean-view and balcony staterooms as well as the largest three-bedroom suites of any new vessel. Norwegian Prima will also offer the most outdoor deck space featuring more pool deck space than any other ship in NCL's fleet plus multiple infinity pools and vast outdoor walkways. All of these features, together with the highest staffing levels and space ratio in the contemporary and premium cruise categories, will deliver an unrivalled guest experience.

Going a step further, NCL re-imagined its industry pioneering Waterfront by doubling the space and adding a greater variety of things to do as well as more dining options than ever before by introducing the Ocean Boulevard. Located on deck eight, Ocean Boulevard is 44,000 square ft. in size, wraps around the entire deck, and allows guests to walk the perimeter of the entire ship enjoying amazing ocean views and taking part in a wide range of exceptional outdoor activities. 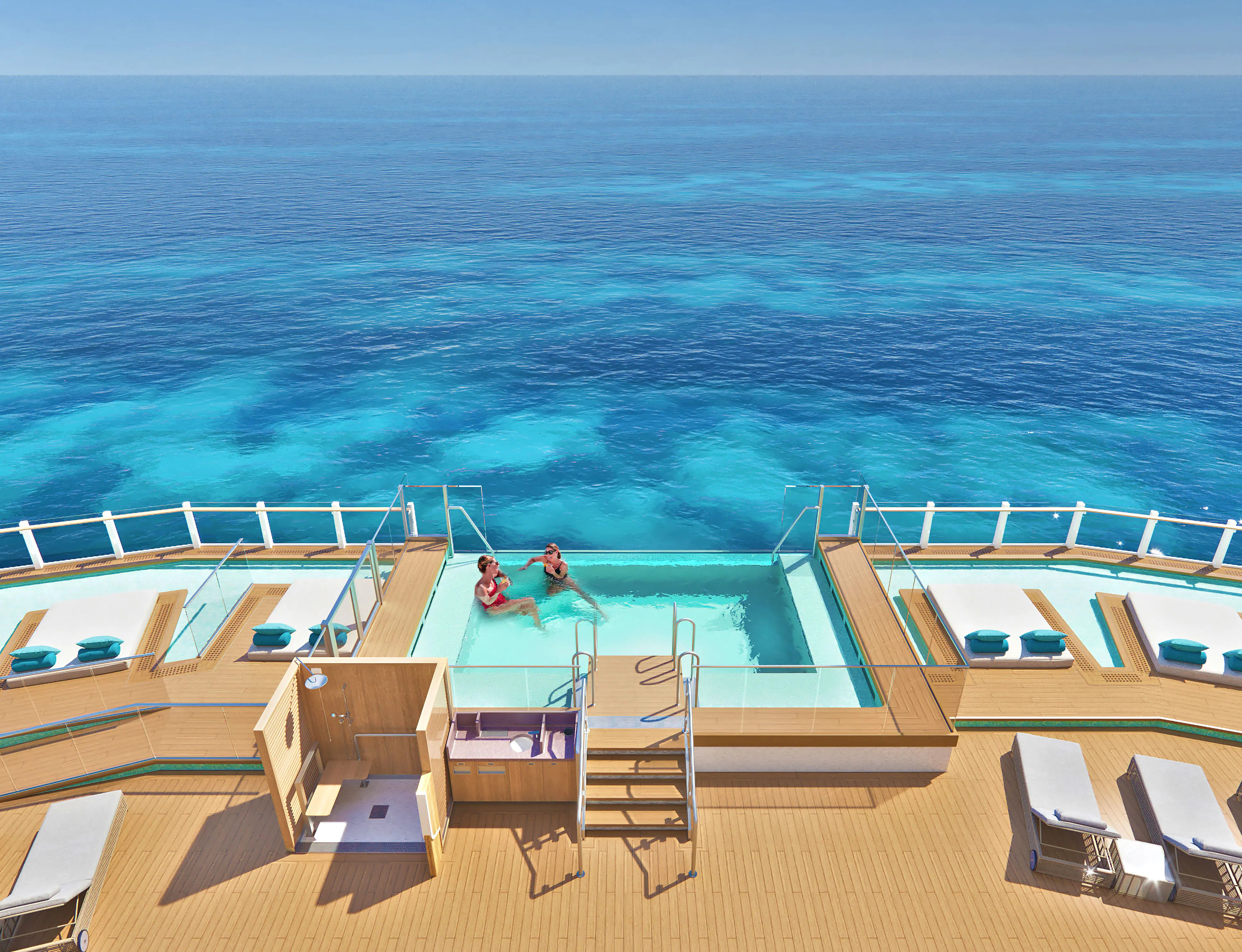 As the only cruise line to offer go-karts at sea, NCL has upped the ante by offering the largest and first ever three-level racetrack with the Prima Speedway. Featuring a longer straightaway with a racetrack of more than a quarter mile in length (1,378 feet/ 420 meters) and 22 percent larger than the current racetrack on Norwegian Encore, the speedway will now go around and through the funnel of the ship and boasts 14 nail-biting turns where 15 drivers can simultaneously race on the open ocean, reaching speeds of more than 30 mph (50 kph). And after completing their ultimate thrill ride, racers can unwind at the new Prima Speedway Bar located beneath the racetrack. 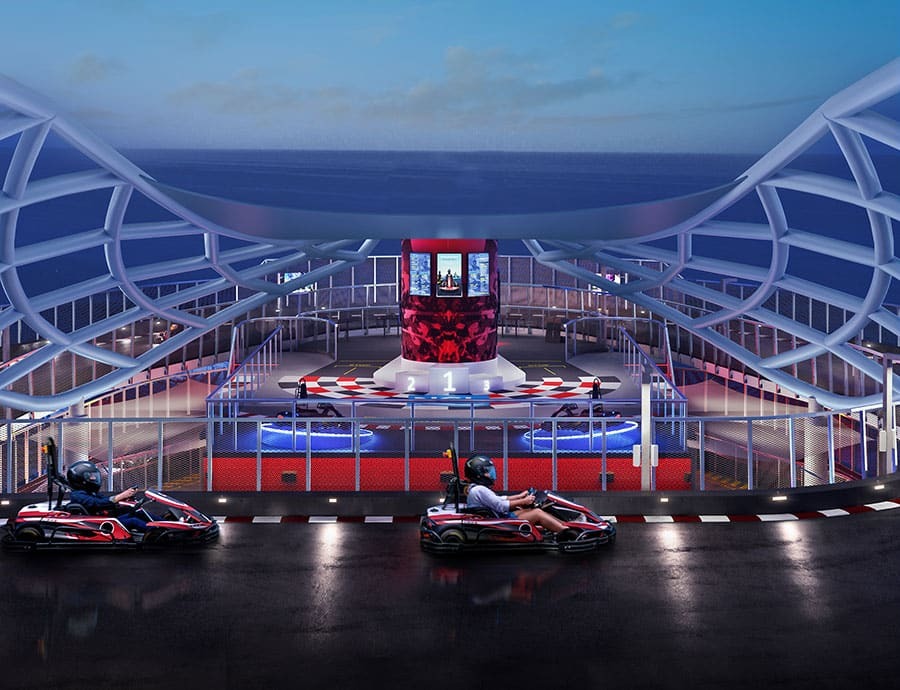 Anyone looking for the most extreme adrenaline rush at sea will rush to The Drop, the world's first free-fall dry slide where you can experience a 10-story plunge reaching the highest G-forces of any cruise line; even more Gs than an accelerating F1 race car! This edge-of-your-seat experience takes a competitive turn with The Rush, featuring dueling dry slides where guests can race each other for the ultimate in bragging rights.

And making its splashing first appearance as part of the ship's Aqua Park and Main Pool area, will be the brand's first Tidal Wave waterslide featuring gushing surfs where you can ride an inner-tube to catch the perfect wave.

There is also the Vibe Beach Club, NCL’s adult-only area providing enhanced experiences including a dedicated bar and two infinity hot tubs where guests can enjoy the ocean’s horizon at leisure while sipping a beverage of their choice. 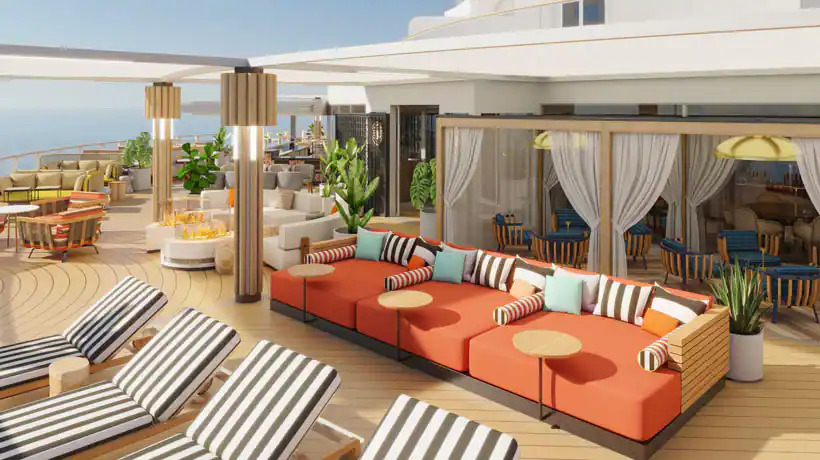 In the evening, the Tony Award® nominated musical “Summer: The Donna Summer Musical” will entertain Prima's guests as the interactive headlining act. Presenting the story of Donna Summer’s meteoric rise from young starlet to the Queen of Disco and showcasing a score of more than 20 of her mega hits such as the “Bad Girls”, “Last Dance”, and “Hot Stuff” to name just a few. During this 75-minute immersive production, the theatre itself transforms into a full disco and guests can become a part of the show and dance to Summer’s all-time medleys, a first at sea. The three-story venue features a customizable seating layout and awe-inspiring moving LED screen that lowers from the ceiling and is nearly half the size of the venue itself.

Norwegian Prima will push the boundaries of guest entertainment as it rolls out its interactive LIVE on NCL game show experiences that allow the audience to be part of the show and have an opportunity to win incredible grand prizes. These interactive productions take the Prima Theatre and Nightclub and transforms it into a larger-than-life set where you can be a participant in some of the most legendary game shows including classics such as: The Price is Right LIVE on NCL; Supermarket Sweep LIVE on NCL; Press Your Luck LIVE on NCL and Beat the Clock LIVE on NCL. 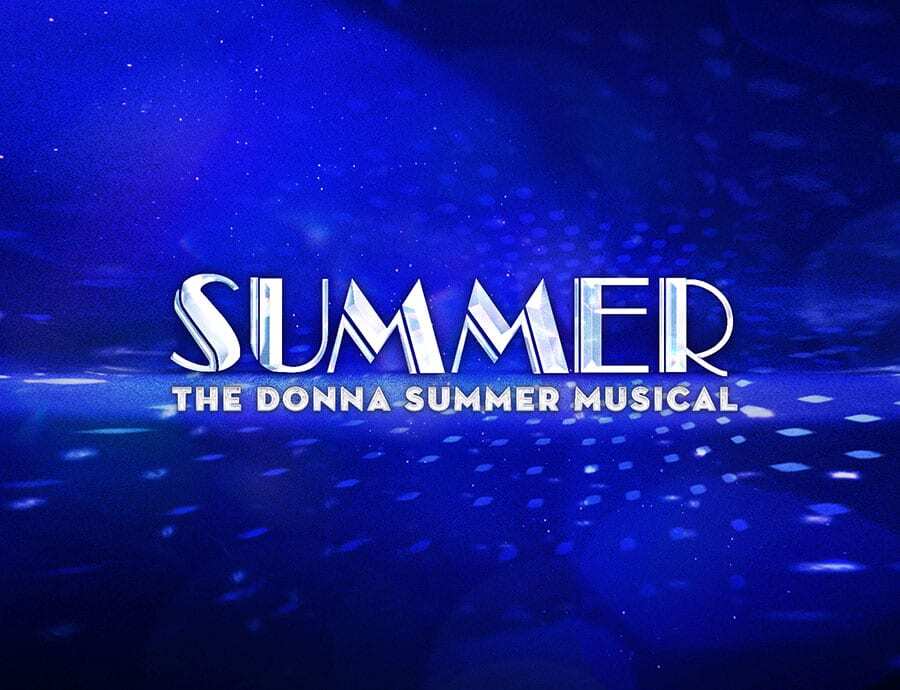 There is so much to do and see aboard the Norwegian Prima. All you need to do is decide which destination appeals to you the most.

Summer 2022: Northern Europe and The UK

Following a string of inaugural cruises and beginning August 2022, Norwegian Prima will be the newest ship embarking in Northern Europe. From Aug. 17 to Sept. 13, 2022, she will sail a series of eight-day voyages from Amsterdam, Netherlands, and Copenhagen, Denmark, offering guests the opportunity to explore the continent's Northern Europe, Norwegian Fjords and Baltic regions.

Fall/Winter 2022: Bermuda and The Caribbean

On Sept. 23, Norwegian Prima will depart Southampton, England, on a 12-day transatlantic voyage visiting Lerwick, Scotland with an overnight in Reykjavik, Iceland, before arriving in Halifax, Nova Scotia, and ending her journey in New York to commence a five-day roundtrip itinerary on Oct. 10 to Bermuda. On Oct. 15, she will depart from New York on a 12-day immersive Caribbean itinerary. She will have calls to Willemstad, Curacao; Kralendijk, Bonaire; Oranjestad, Aruba, with all visits featuring between nine and 10 in-port hours. On Oct. 31, Norwegian Prima will kickstart her Caribbean season departing from Galveston, TX, to Miami on an 11-day itinerary with visits to Willemstad, Curacao; Kralendijk, Bonaire, and the company's recently enhanced private island Great Stirrup Cay, Bahamas. From Nov. 19 to Dec. 3, Norwegian Prima will sail from Miami offering three, seven-day Western Caribbean cruises visiting Harvest Caye, the Company's private resort destination in Belize, in addition to other notable ports including Cozumel, Mexico, and Roatan Island, Honduras. 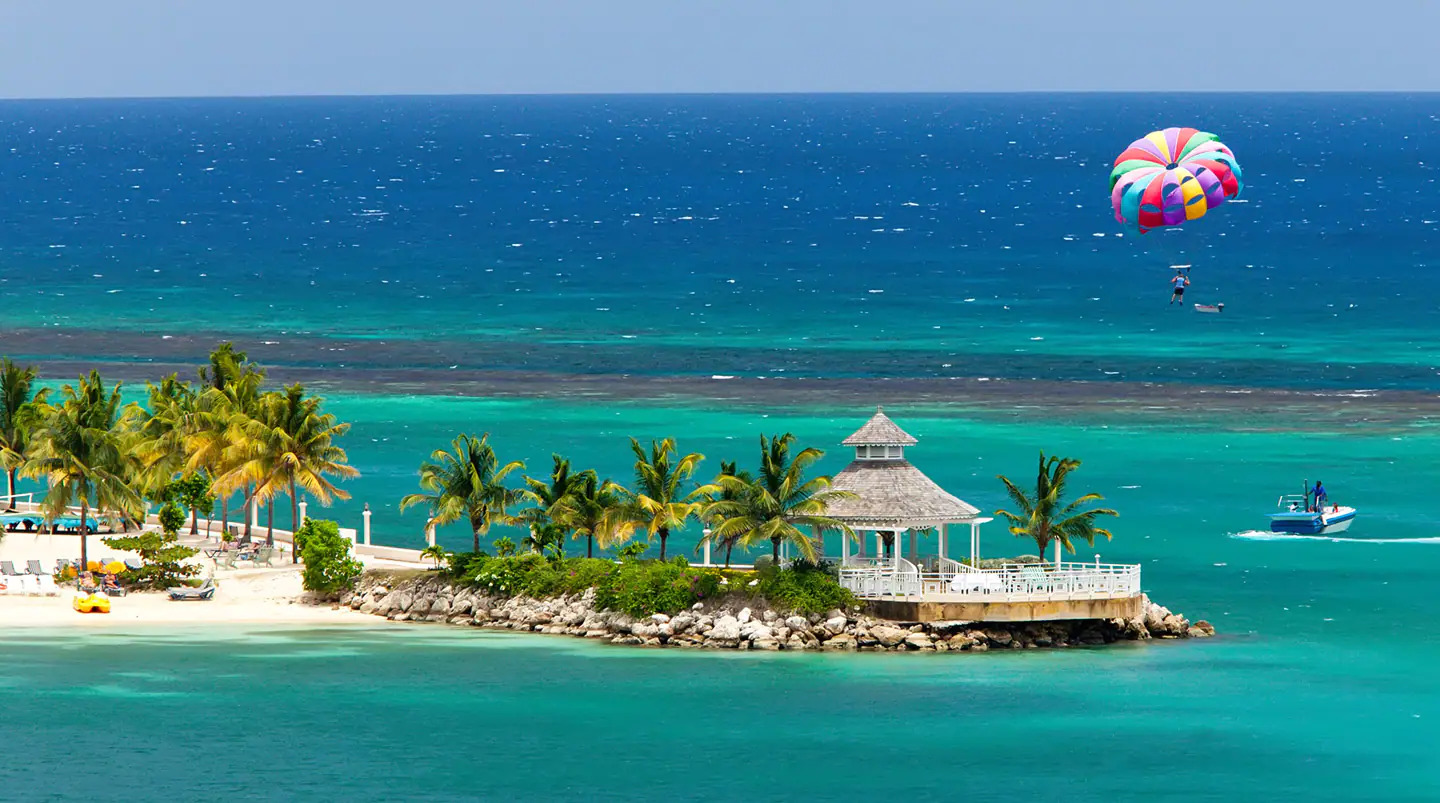 From May 25 to Sept. 7, Norwegian Prima's summer 2023 season will offer a mix of 10 and 11-day Norway and Iceland sailings from Reykjavik, Iceland, and Southampton, England, offering the unique opportunity to cruise through the remarkable Heritage Fjords, a UNESCO World Heritage site, where Prima will be one of the few ships that meet the criteria to sail in these environmentally protected waters. Other bucket-list worthy destinations include a call to Geiranger, Norway, where guests can visit Norway's most famous fjord, Geiranger Fjord, an awe-inspiring deep blue UNESCO protected nine-mile fjord surrounded by majestic, snow-covered mountain peaks, wild waterfalls and lush vegetation. The world famous Seven Sisters and The Bridal Veil waterfalls are just two of the numerous cascades that run down the steep mountainside throughout Geiranger Fjord. Norwegian Prima will also call to Olden, Norway, with access to the jaw-dropping Briksdal Glacier, a branch of the famous Jostedal Glacier, where visitors can partake in once-in-a-lifetime hikes and nature trails.

After Norwegian Prima concludes her inaugural year sailing bucket-list itineraries as the industry’s newest ship, she will be the only vessel during the winter 2023 and 2024 season offering 7-day voyages to the Western Caribbean out of Galveston, Texas, providing the most extensive port experiences in the region with every itinerary visiting four ports. Norwegian Prima will call to Costa Maya and Cozumel, Mexico; Harvest Caye, the Caribbean's premier island destination in Belize and exclusive to guests of NCL; and Roatan Island, Honduras, with all visits featuring between eight and nine in-port hours.

For more information about Norwegian Cruise Line ships and their itineraries, contact your Travel Professional or visit www.ncl.com

VIDEO: Wonder of the Seas Steel Cutting to Delivery Mashup

Wonder of the Seas has officially joined Royal Caribbean International’s award-winning line-up of ships. The next of ... learn more

Royal Caribbean has just announced that Wonder of the Seas will debut in the U.S. and Europe and to celebrate, the cr... learn more

In this latest video from Royal Caribbean, get an exclusive look at the fifth ship in the cruise line’s iconic Oasis ... learn more