The Blessing Ceremony in Puerto Williams

Celebrations began at an intimate blessing ceremony, held at the Cape Horn Sub-Antarctic Center in Puerto Williams, on November 15. Local dignitaries from Puerto Williams joined the festivities, which honoured maritime traditions. After the Royal Caribbean Group customary bagpipe performance, singers sung the Chilean and American national anthems, a video depicted a religious figure blessing the ship, and Felicity Aston was formally introduced as the vessel’s Godmother. Unable to attend in person, Jason Liberty, President and CEO of Royal Caribbean Group, and Roberto Martinoli, President and CEO of Silversea Cruises, sent a video message to thank the community, the crew, and all employees involved in the milestone achievement, while Barbara Muckermann, Silversea’s Chief Commercial Officer, and Felicity Aston each addressed attendees.

The First Naming Ceremony in the Lemaire Channel

On Saturday, November 19, Silver Endeavour became the first-ever ship to be named in the Lemaire Channel – one of the continent’s most scenic straits, located off the Antarctic Peninsula. A long-respected maritime tradition, Aston blessed Silver Endeavour for good fortune, cutting a ribbon alongside Captain Niklas Peterstam on one of the ship’s outer decks to trigger an ice-sculpted, magnum-sized bottle to smash against the hull. Guests witnessed the historic moment from Zodiacs in the 11km-long, cliff-lined stretch of water.

“We are incredibly proud to have hosted ultra-luxury cruising’s first Antarctica naming ceremony for Silver Endeavour­­, our third ship to be named in just nine months,” said Roberto Martinoli, President and CEO, Silversea Cruises. “I would like to thank Captain Niklas Peterstam and the ship’s crew, the entire Silversea team, Jason Liberty and all those involved at Royal Caribbean Group for their invaluable support in reaching this momentous milestone. Silver Endeavour strengthens our position as the industry’s leading cruise line, broadening our diverse polar offering for our guests’ enjoyment. A source of great inspiration for our guests, we are honoured to name Felicity Aston as the ship’s Godmother. Felicity is the perfect ambassador for Silversea; she shares the same unwavering sense of curiosity and adventure that unites all of our guests.” 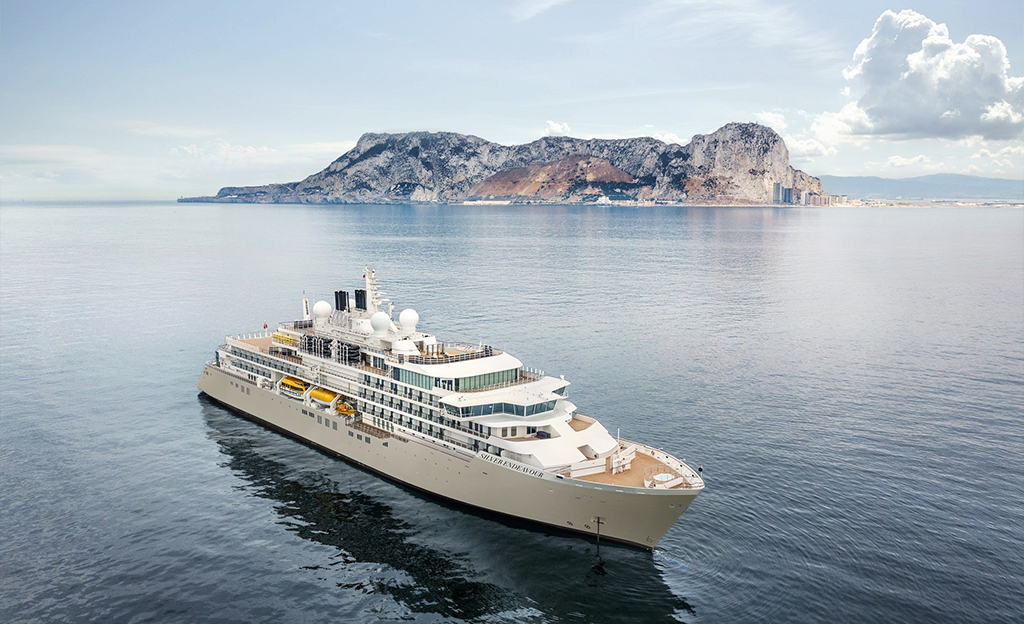 Silversea named polar explorer and climate scientist Felicity Aston (main photo) as Silver Endeavour’s Godmother in October 2022. Aston became the first woman to ski solo across Antarctica in 2012, as well as the first person to traverse the continent by muscle power alone.

“Being among the first to sail aboard Silver Endeavour, naming the ship in the company of such esteemed guests, and assuming the role of Godmother makes me incredibly proud,” said Felicity Aston MBE. “She shares her name with the ship on which Captain Cook set forth for the ends of the earth, but exploration has of course evolved in the centuries since Cook departed. Today, exploration is not only about geographical discovery; it is also about finding new ideas, new inspiration, and new perspectives. Silver Endeavour will allow more people to become explorers and return home with new outlooks. She will be a source of self-enrichment, as people connect with the planet and each other. Fair winds and following seas to all those who sail on her.”

Built to PC6 polar class specifications, Silver Endeavour is designed for polar exploration and will extend Silversea’s polar seasons. She carries state-of-the-art amenities, with an industry-leading Zodiac-to-guest ratio; kayaks; and cutting-edge navigation and exploration technology, including a remote gimbal camera system, which can capture high-quality images from 5km, among other amenities. She maintains Silversea’s trademark level of comfort, with a crew-to-guest ratio of 1:1 and the cruise line’s hallmarks of luxury, including butler service for every suite and some of the most spacious accommodations in expedition cruising.

Building on the extended polar season announced for Silver Endeavour for 2023/2024, Silversea Cruises recently unveiled 27 new voyages for the vessel, calling in more than 125 of the world’s most remote destinations between summer 2024 and winter 2024/2025. Featuring a varied array of departures, itineraries, and voyage lengths, with sailings ranging from six to 21 days, the new sailings include four new voyages to the British Isles and Iceland, nine additional sailings to the Arctic, and 14 voyages to Antarctica.

Sail the Eastern Mediterranean this summer with Silversea Cruises

Dispatches from the Galápagos

A Welcome Return to Cruising