For 2023, a new itinerary on France’s Saône and Rhône Rivers was added to Riviera’s long list of European river options. Sailing from Lyon, France’s gastronomical capital, to the shores of the Mediterranean Sea, the Lyon, Provençal Rhône & the Camargue River Cruise, offers guests the experience of Burgundy, one of the world’s most revered wine regions; the Pont du Gard aqueduct and Arles’ magnificent Roman remains; as well as the Camargue wetland, with its wild horses and famed pink flamingos; all in one exciting itinerary. Along the way, enjoy guided tours of Cluny Abbey, a glorious Benedictine abbey; Beaune, Burgundy's wine capital; Avignon, home to the stunning Pope's Palace; Saintes-Maries-de-la-Mer; and Orange, a historically important trading post. This 11-day cruise is available April through October 2023 and includes 10 nights cruise accommodations, all onboard meals, and 14 guided tours and visits, with plenty of time to explore the region, and the convenience of a round-trip Lyon departure. 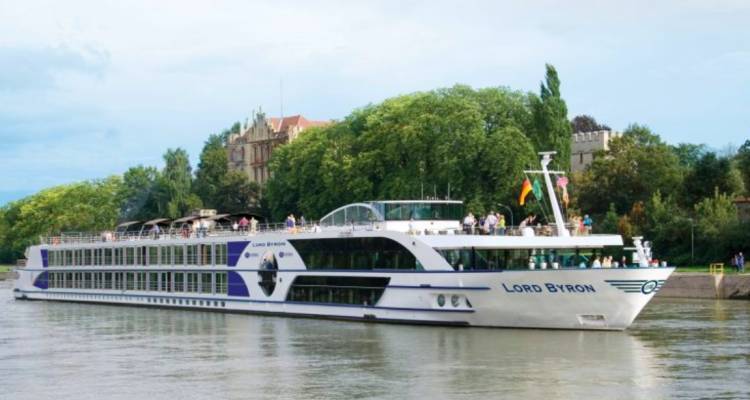 Some of the trip's highlights include:

Mâcon - Nothing beats the excitement of waking up somewhere new as you arrive in the delightful town of Mâcon, the capital of the Mâconnais region of Burgundy. After breakfast, enjoy the short drive to Cluny Abbey, one of the most glorious Benedictine abbeys of the Christian Middle Ages, considered one of the most prestigious monastic institutions in Europe. Visit one of the region’s best winemakers for a tour and tasting in a historic chateau.

Chalon, Beaune & Burgundy - Visit pretty villages that produce some of the world’s most sublime wines – Meursault, Volnay, Pommard, and many more. Nearby is medieval Beaune, Burgundy’s wine capital and one of the most picturesque walled towns in the region. At its centre is the Hospices de Beaune, also known as the Hôtel-Dieu. Originally built in the 15th-century as a hospital for the disadvantaged, it’s a jewel of High Gothic architecture, instantly recognizable for its colourful glazed roof tiles arranged in dazzling geometric patterns. You can also visit the fascinating Dalineum museum dedicated to the Catalan artist Salvador Dali with a collection of his surrealist paintings, sculptures, furniture and photographs.

Lyon - Founded by the Romans in 43BC at the confluence of the Rhône and Saône Rivers, there are many Roman remains to be seen. The production of silk brought Lyon to prominence during the Middle Ages, and throughout the city you can see signs of the wealth that poured in – Renaissance buildings, imposing churches and Europe’s largest pedestrian square, Place Bellecour, with a statue of Louis XIV as its focus. The old town, a UNESCO World Heritage Site, is crammed with antique shops and intriguing traboules – narrow covered passageways enabling silk merchants to transport their wares to the river without getting wet – that today are a joy to explore. As well as its glorious architecture, Lyon is generally acknowledged as France’s (and to locals, the world’s) gastronomic capital. Nouvelle cuisine was invented here and the city boasts a huge array of specialty food shops and eateries, including 20 restaurants with one or more Michelin stars and countless little places to eat and drink.

Explore the beautiful Ardèche Gorges, whose scale is a fitting reminder of Mother Nature’s awesome power. Sheer limestone cliffs plunge almost 1,000 feet to the river’s blue waters, which elegantly snake their way through stupendous rock formations, culminating in a huge natural arch, the Pont d’Arc. Caves, grottoes and natural sculptures create marvellous views at every turn. In the afternoon, sail through the famous lock at Bollène. You will notice the landscape gradually becomes less green with more ochres and magentas, the houses have sloping terracotta roofs typical of the Mediterranean and the air carries heady aromas of pine and cypress. You can only be in the Midi – the south of France. 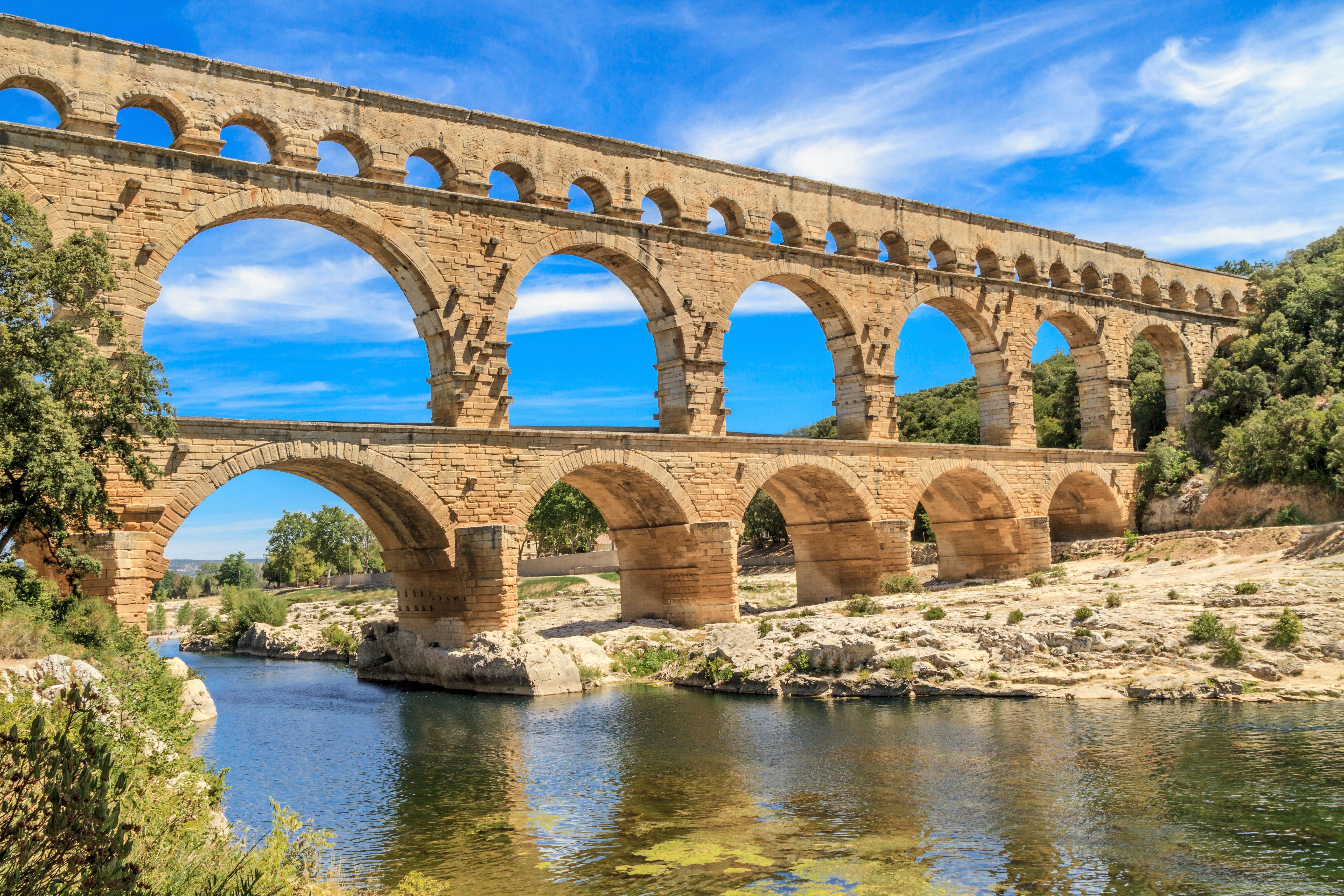 Avignon, Pont du Gard & Uzès - Enjoy a guided tour of one of the most extraordinary and intriguing cities in France. Avignon’s destiny changed during the 14th century, when the Pope’s court moved here to avoid strife in Rome. Igniting a century of prosperity, the Pontiff commissioned a host of ambitious building projects, and today the city is immaculately preserved, nestling behind its almost-intact 14th-century walls and boasting more remarkable monuments, superbly decorated buildings, churches, chapels and convents than you can possibly count. Most important is the stunning Popes’ Palace, made up of two buildings that together form the largest Gothic palace in the world.

Visit the amazing Pont du Gard Roman aqueduct, one of the best-preserved Roman constructions and wonders of the ancient world against a superb backdrop of pine and cypress-covered hills. No amount of fame can diminish the first sight of this 2,000-year-old structure, which was the highest bridge built in the Empire – the Romans themselves considered it the most important testimony to their greatness.

Arles & Les Baux-de-Provence - Wake up under the azure skies of deepest Provence and amid the warm stone colours of Arles, many of whose historic monuments are UNESCO World Heritage Sites. Albeit small, it was the key stronghold on the Roman road to Spain, one of the empire’s richest possessions. Seagoing ships could reach the city and it became a regional capital, briefly ruling over Gaul, Spain and Britain. Your guided tour will help you appreciate the finer points of Arles’ magnificent Roman remains, including the splendid amphitheatre, one of the best preserved in the world. The disturbed but great genius and artist Van Gogh lived in Arles for just over a year (in 1888). It was his most prolific period and, inspired by light and beauty of the Provençal countryside, he produced around 300 works, including The Night Café, The Sower and, of course, Sunflowers. In the afternoon, take a scenic drive to the picturesque village of Les Baux-de-Provence located in the Alpilles mountains, spectacularly sited atop a rocky outcrop. The ship remains moored in Arles overnight so after dinner perhaps hop ashore for a digestif and savour the atmosphere of this historic spot. 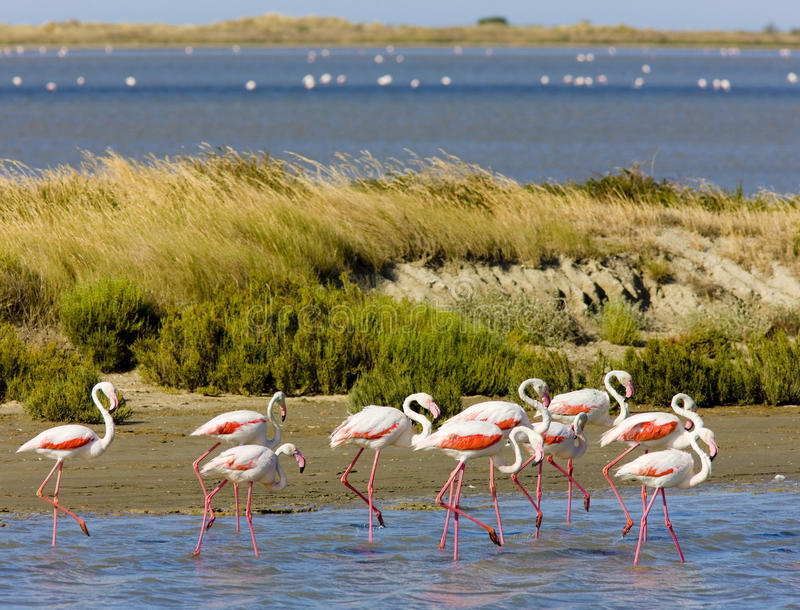 Port-Saint-Louis-du-Rhône, Camargue & Ornithological Park - Arrive at Port-Saint-Louis-du-Rhône, located at the mouth of the great Rhône, between the river and the sea, and surrounded by the unique wilderness of the Camargue. The Parc naturel régional de Camargue fringing the shoreline of the Camargue, has been a protected wetland and marine area since 1970. Famed for its wild horses, black bulls and birdlife, it’s a paradise for birdwatchers as well as a spectacular place to enjoy a host of other sporting activities from cycling, hiking and pony-trekking.

Enjoy a tour into this unique landscape with a visit to the Ornithological Park of Pont de Gau to observe and learn more about the colonies of bird species, including the famed pink flamingos, who have made their home here.

Visit the bustling seaside town of Saintes-Maries-de-la-Mer, the capital of Camargue, where you can enjoy a short orientation tour of the main sights – the Notre Dame de la Mer, a fine Romanesque church dating from the 9th century and the old town hall.

Orange & Châteauneuf-du-Pape - Take a scenic drive into the heart of the Rhône Valley, savouring the views of its vineyard draped landscape and the Roman city of Orange, located on the ancient Agrippa Road and a historically important trading post. This charming ‘City of Princes’ is home to two magnificent and unmissable UNESCO monuments: the mighty Triumphal Arch and the Roman theatre – the world’s best preserved ancient theatre built in the 1st century AD. Drive through the stunning and world-renowned region of Châteauneuf-du-Pape, with its vineyards prized the world over, before arriving in the magical village of Châteauneuf-du-Pape, spectacularly sited on a hill, its cobbled streets awash with wine shops and cellars at every turn. Châteauneuf-du-Pape was the first wine-growing area to receive an appellation contrôlée and wines bearing the name must meet the strictest conditions. Enjoy a delectable wine tasting in one of the region’s finest wineries before driving back to the ship.

Your cruise ends in Lyon where you have the option to extend your stay. You will have seen many of the highlights of Lyon during your cruise. Now you are free to explore at your own pace. Take a leisurely stroll along the river banks at the confluence of the Rhône and Saône, or delve into one of the many superb food shops and eateries in this legendary capital of cuisine. You will not be disappointed. 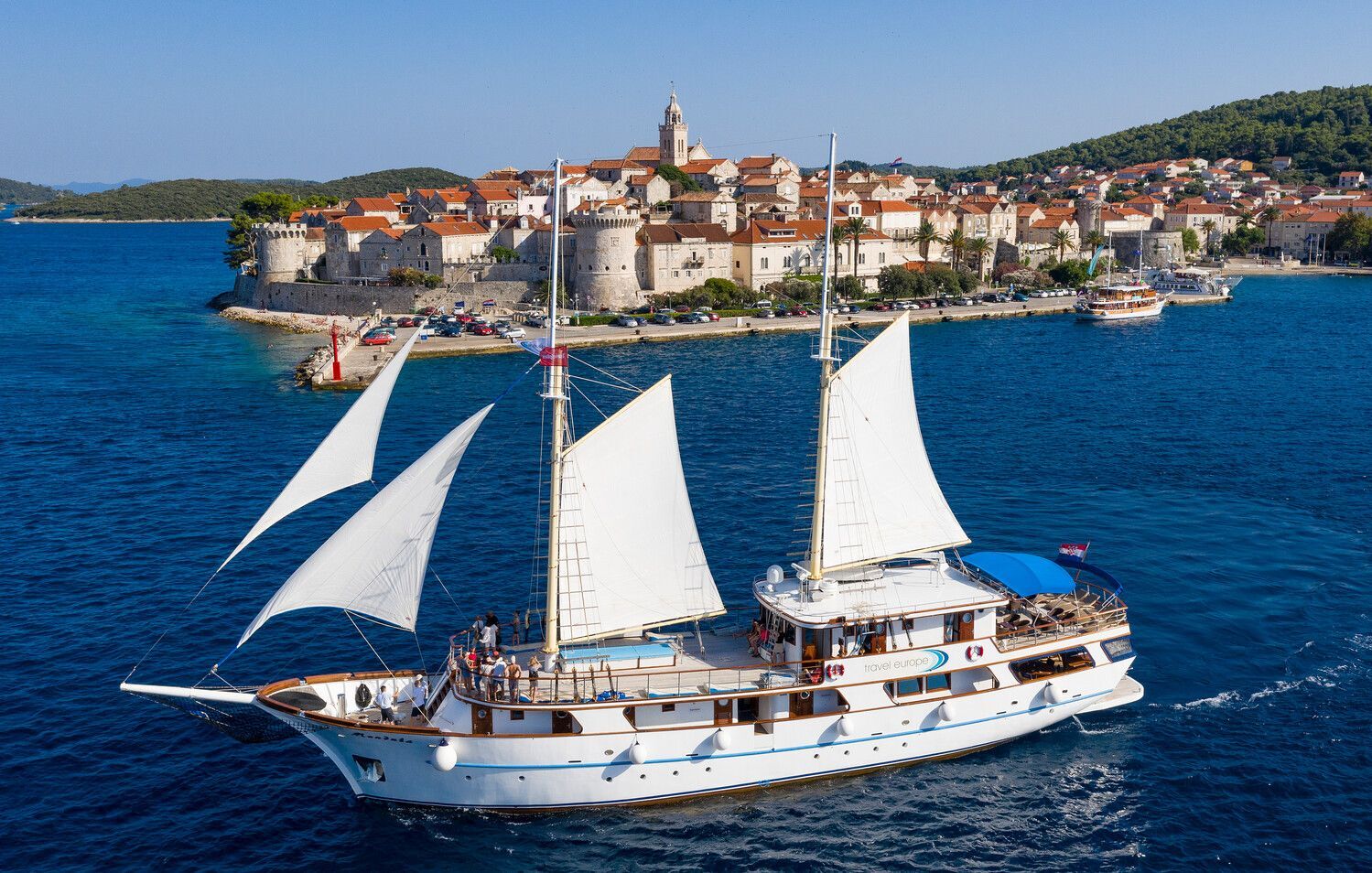 Ready for a different kind of adventure? Sail the glistening waters of the Adriatic Sea and anchor in picturesque ports along Croatia’s dazzling Dalmatian coast on the Split, Hvar and the Delights of Dalmatia Yacht Cruise aboard the twin-masted MS Mendula. Sailing from Croatia’s second-largest city, Split, you will visit Brač, lush Hvar, forested Korčula, birthplace of Marco Polo; remote Vis where Mamma Mia! Here we go again movie was filmed; pretty Solta, as well as the medieval town of Trogir. Along the way, stop in idyllic, unspoiled locations to swim from the ship’s platform. The eight-day cruise is available May through October and includes seven nights of yacht accommodations, daily breakfast, five lunches, two dinners and seven guided tours and visits. Sailing between the islands and the shore, you will enjoy spectacular coastal views and memories of fun-filled days that will stay with you for a lifetime. After just a few hours on board you will be on a first-name basis with your fellow cruisers as well as the friendly yet unobtrusive staff who attend to your every need. The dress code is casual and summer dresses, shorts and t-shirts are the order of the day. This is exactly how a vacation should be!

Your tours and visits include:

The MS Mendula offers the authentic experience of a classic sailing ship with the comfort and glamour of a modern-day private yacht. Just 15 staterooms are available for 30 guests, featuring either a double bed or twin beds, dressing table and chair, wardrobe, bathroom with shower, air conditioning and free Wi-Fi.


Riviera guarantees exceptional value, promising never to add hidden surcharges or fees, and it doesn’t automatically include gratuities or drinks, so the choice is always up to you, the guest.

Get Ready to Meet the American Countess

Austria’s capital city is famous as a cradle of classical music and high culture, for its skyline shaped by Hapsburg ... learn more

WHAT WE REALLY NEED HERE, I am thinking, is a good, old-fashioned murder. I am lounging in a shaded area on the Sanct... learn more