Vikings In the Valley

Norway is a travel destination that is rightfully known for its natural attractions, so when I set out on my own Norwegian adventure, I knew I could expect to see some of Mother Nature’s finest work. Travelers come from all over the world to catch a glimpse of famous Norwegian fjords (the Geirangerfjord, Sognefjord and Hardangerfjord to name a few), towering waterfalls and crystalline glaciers. What I found in Norway, however, surprised me. Many of Norway’s most amazing experiences are found inside, in the country’s interior - and they go far beyond photo ops of natural wonder. 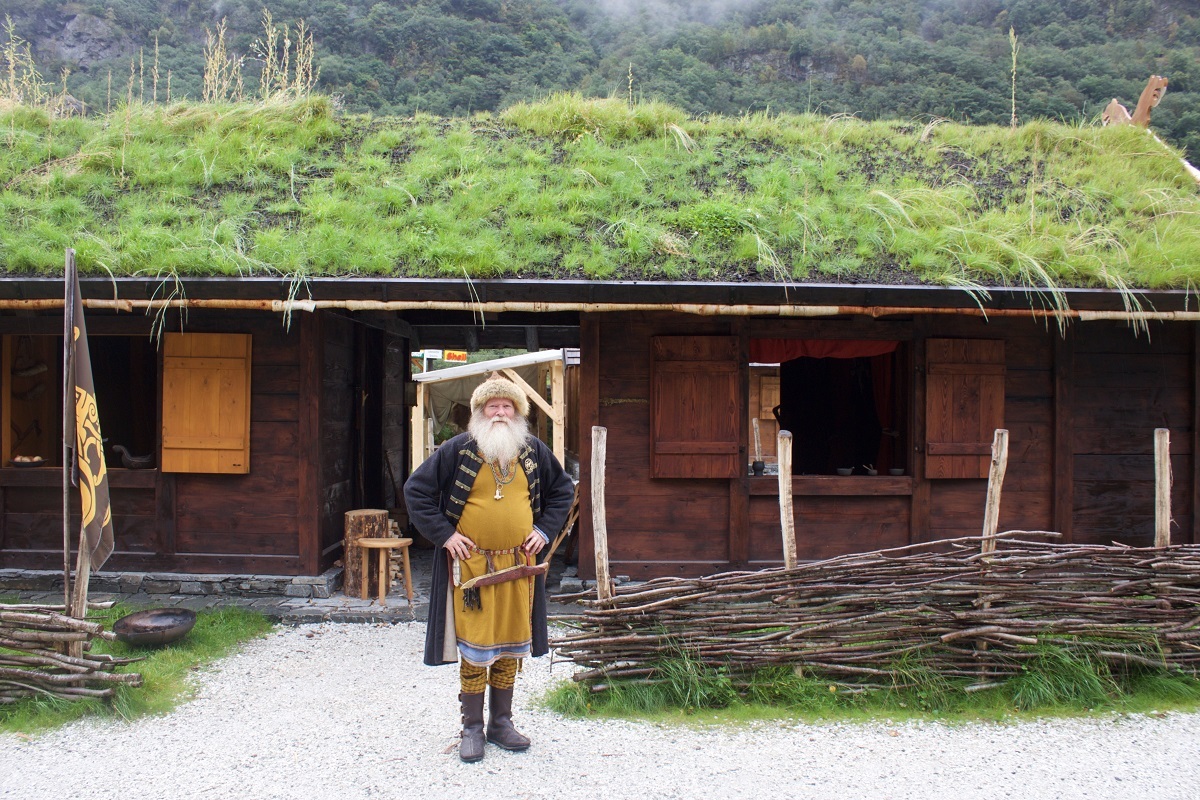 Just a short bus trip from Flåm lies a “living” Viking museum in Gudvangen (roughly translates to: The Valley of the Gods). The Viking Village experience is called a living museum because there are upwards of 30 real, living Vikings who inhabit the community. They conduct their lives in a manner as true to ancient Viking civilization as possible, right down to the clothes they wear, the cabins they live in, and the food they prepare and eat. Each member has a job to do, whether it be cooking traditional food, building and painting structures around the camp, or creating weapons or pieces of art and jewelry for the settlement (also sold in the gift shop). 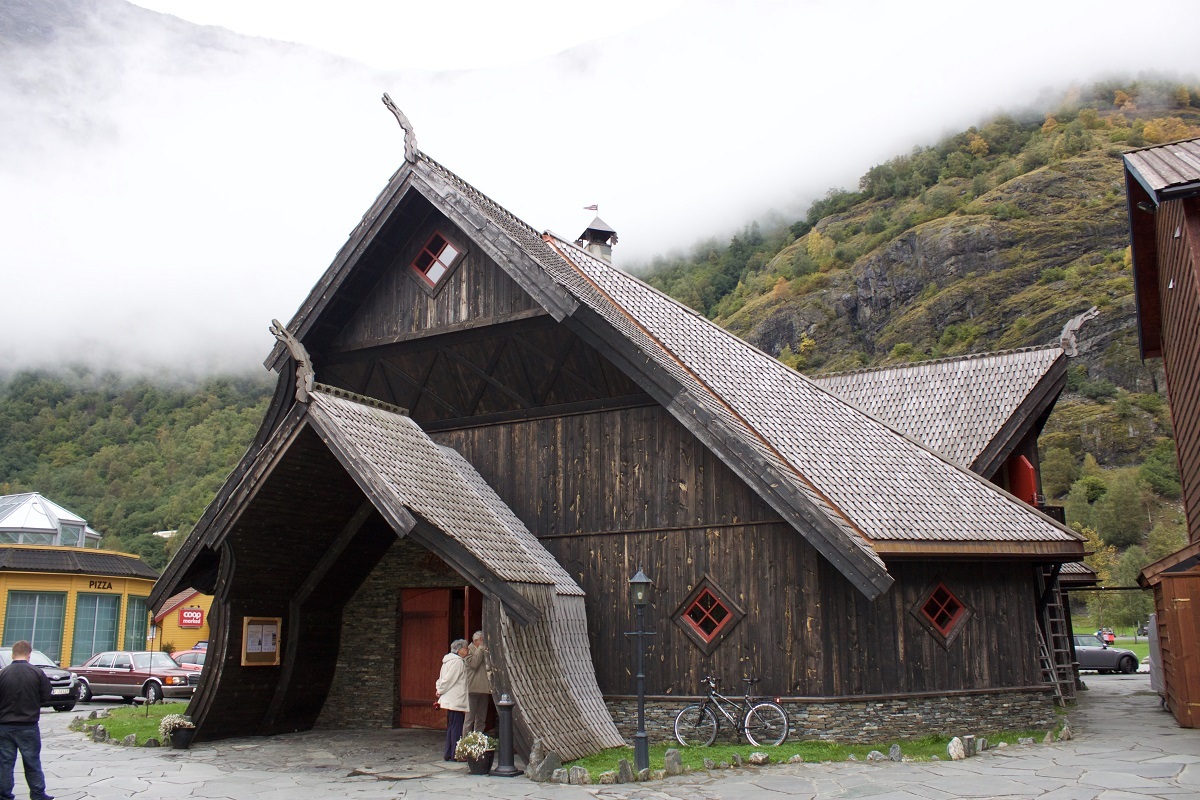 I share lunch with Frode, a resident Viking, in a hut painted red with real oxblood. He tells me the village is intended to reflect exactly the way Vikings truly lived, for better or worse. His breath is visible overtop of the soup that we’re both eating, and I’m thankful to be wearing a warm sweater. His shirt isn’t nearly as thick, and I guess it’s why he wears fur around his neck and has such a thick beard! Frode explains that when anything is done in the village, it’s for a reason: “If someone starts a fire - they are hungry. Simple.” We enjoy a four course meal, complete with vegetable soup, chicken, and baked bread. All food is traditional, and many spices are collected from right there in the Fjord - particularly the garlic-like herb called ‘ramps’, that goes on our bread. Frode tells me that the fjord “smells like pizza” when it is in full bloom. It is this juxtaposition of modern knowledge and dedication to authentic Viking living that creates such magic in the Viking Village. 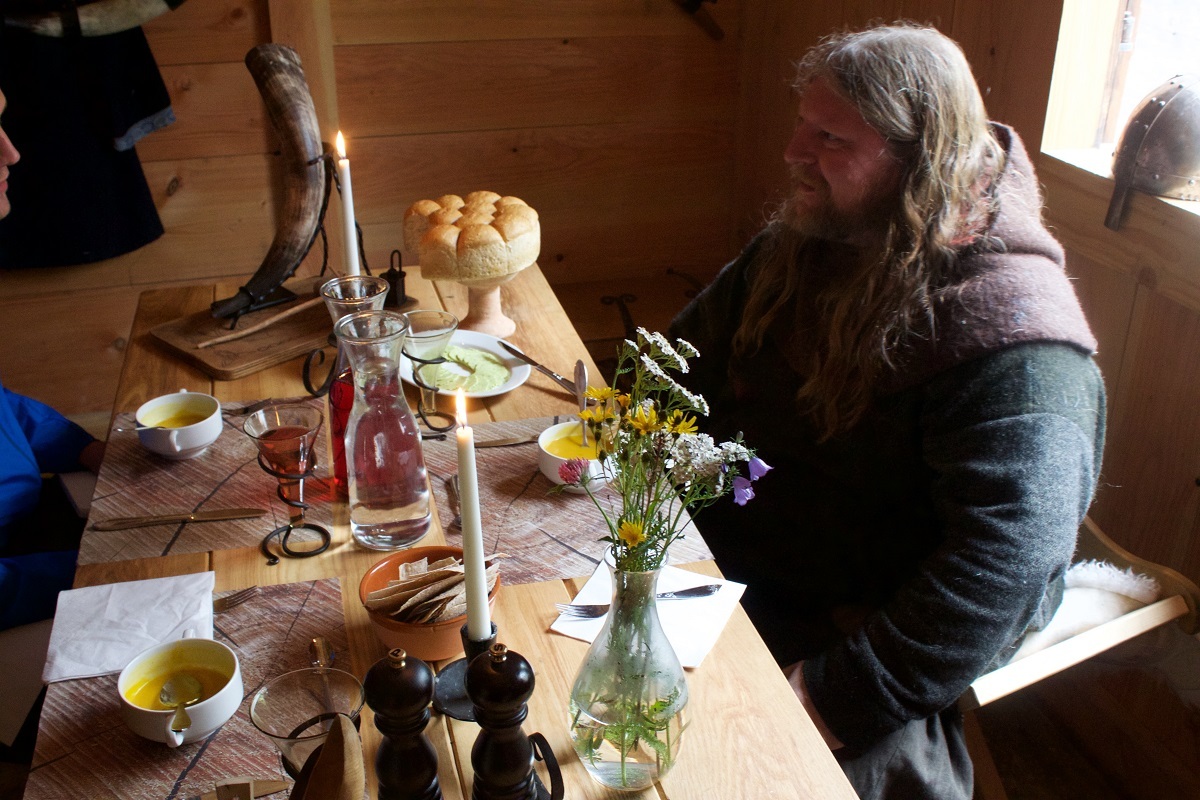 He says the days are long, and the work is hard, but he wouldn’t change a thing. Frode has always had an interest in Viking culture, has Viking blood in his ancestral tree, and is living his dream. For travellers, this is a unique opportunity to share a glimpse into what life must have been like for this mythical culture, and an experience that won’t soon be forgotten. Tip: the Viking Market (July 16 - 21, 2018) is a time of great excitement in the village. Vikings from around the world come to share music, food, and culture with other members of Viking culture and tourists alike.

A meal Fit For a (Vi)king

In the town of Flåm, next to the cruise ship port, is a restaurant/brewpub called the Aegir Brewery. Designed to be reminiscent of a stave church, the interior feels warm and rustic, with seating around a fireplace and fur pelts adorning the benches on the outer walls. The pub’s menu is built on a simple philosophy: “Beer in and with the food.” This is a wise decision - Aeger beer has won gold, silver, and bronze medals at the global beer Olympics for two years straight! Even if you aren’t a beer lover, it’s almost impossible to turn down a glass of beer with the knowledge that it is some of the best in the world. 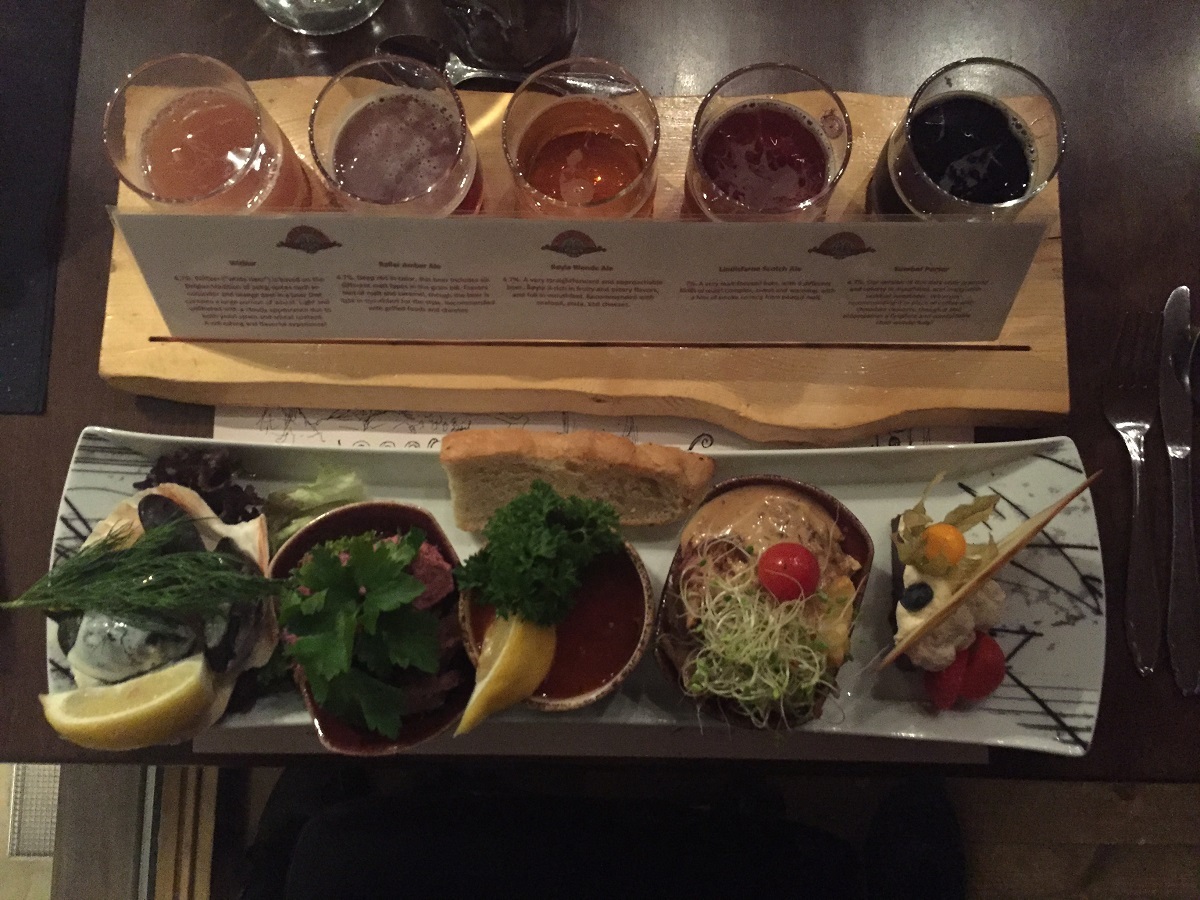 The ideal food and beer experience is packaged together in the “Viking Plank” meal, which is yours for a reasonable 495 NOK (about $80 CAD). This five-course meal includes samples of shellfish, pork shank, smoked reindeer, salad, and chocolate cake. The standout is definitely the smoked reindeer, garnished with blueberry cream, an unexpected flavour combination that is as unique as it is delicious. Each course is paired with a specific Aegir beer matched to complement the flavour of the dish. Don’t let the “sampling” nature of the Viking Plank deter you - after eating this five-course meal, you’ll feel ready to hop in a canoe and paddle to the shores of a faraway land (or whatever it is Vikings did following a big meal).

The Flam-Myrdal railway is widely considered one of the most beautiful railways in the world. For years, cruise ship guests have ridden these tracks up to the top to get a look from the top of the Fjord. Roughly halfway up, the train stops for a spectacle unlike anything I have ever experienced. As the great Kjossfossen Waterfall rushes beneath the train bridge, a dancer appears on the rocks next to the water, and tranquil music plays over a speaker system. It’s a surreal moment of performance art mixed with the powerful rush of Mother Nature that causes a mix of confusion and enchantment among the passengers. The vintage railcars offer fantastic views of the surrounding fjord and valley, making for a scenic trip ripe with photo opportunities. 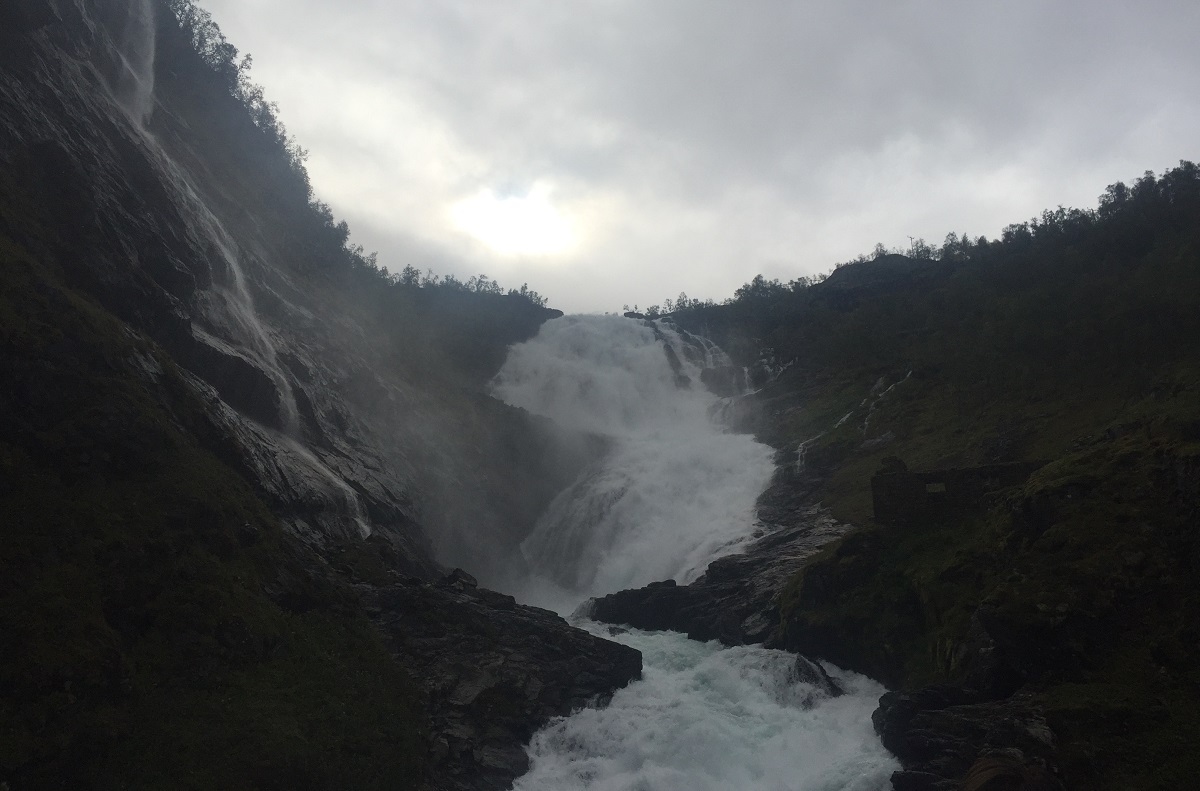 Once at Myrdal, the best way down is by bicycle. They are available for rent at the base of the railway in Flåm, and the 20km ride is - thankfully - about 95 percent downhill. Trust me, you’ll use the brakes far more than the pedals. A few tips: most importantly, make sure that you’re taking the bike trail down from the Myrdal station. A fellow traveller and I mistakenly took a hiking trail with our bikes and found the terrain designed for hiking boots, not bike tires! Pack lightly, but make sure you bring a good camera. Along the way you’ll find countless waterfalls, brilliant, jagged rock faces...and if you’re lucky, an inquisitive pack of goats that wander freely from the goat milk/cheese farm found just outside Flåm.

Despite only having 24 hours in Flåm, these three activities fit easily into my itinerary, and provided an unparalleled variety of experiences. Flåm remains a hidden gem in terms of Norway’s tourism offering, but it won’t stay under the radar for long. With world class food and drink, and unique natural and cultural adventures to be had - it’s well worth the trip to the interior.