TRUE DARKNESS has just taken over, the last streaks of the sunset fading from orange, to pink, to blue and then– inky black. The Sundowner drinks have been packed away, the limes stowed, the biltong back in its container, and all the gin – and tonic – is currently cooling on melted ice. But we’re still driving, the open-backed safari jeep roaring across the semi-desert, the Botswana border out there... somewhere.

Everyone else has gone back to the lodge, content to call it a day and sip pre-dinner drinks by a roaring fire, but out here on the sand, my guide, Shane, has a hunch. With our wildlife tracker, Msongeya, swinging his high- powered lamp in long arcs into the long grass and low trees, we can feel it – even if we can’t see it. A predator. Out there. Almost ready to turn back to camp, we make one final sweep, and we see her – a mother lioness, body quiet, slowly, silently stalking an unfortunate bat-eared fox. A moment later, the predator begins a hot pursuit of her prey, the fox a bit faster, running for his life – both of them running up the road, straight at us. 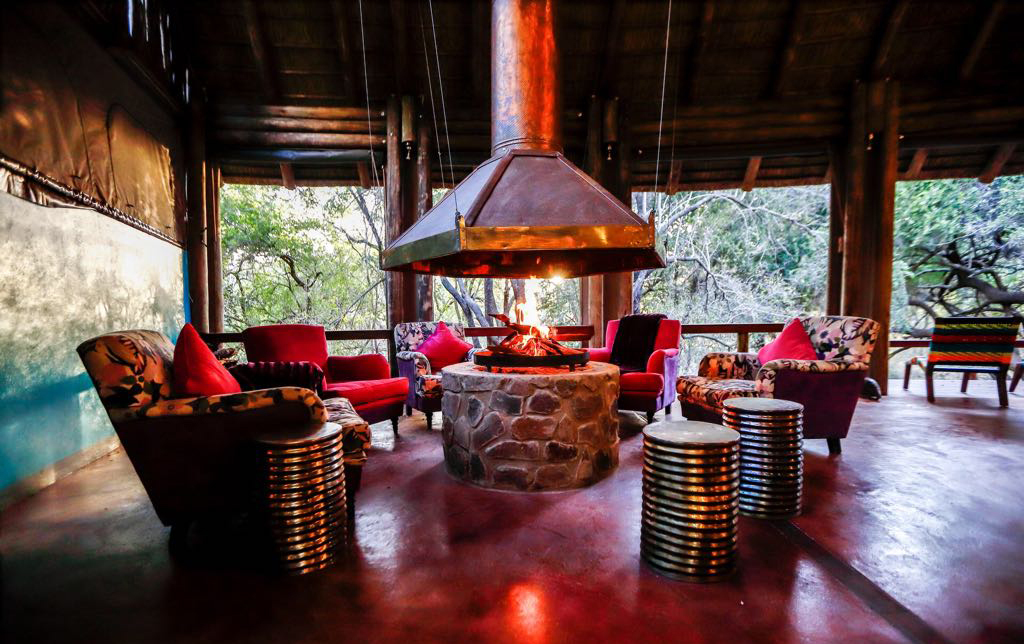 Thirty years ago, Madikwe wasn’t much – in fact, it wasn’t anything. Now the fifth largest game reserve in South Africa, the park was created by uniting (and fencing) a series of scrubby, unproductive farmlands set on the far reaches of the Kalahari Desert. Encompassing 750 square kilometres and home to one of the most dense concentrations of wildlife in the region, the reserve was created with a purpose. On two separate trips here, I was able to explore its best features.

Located about three and a half hours by road north of Johannesburg (or less than an hour by Federal Air), the area here long faced serious economic challenges, the dry soil at the foot of the Dwarsberg Mountains too poor to support prosperous farms. In 1991, the South African government created the reserve, one of the first and only places on the continent that such a park has been established for the purposes of social advancement, economic development and sustainable use of the land.

Old, disused structures were razed, rusty fences removed, and, in 1992, Operation Phoenix commenced. Animals were relocated here from across the country, and Madikwe, which is named for a local river, is now home to more than 60 mammals – including all of the Big Five, both black and white rhino, lion, leopard, cheetah, wild dogs, Cape Buffalo, elephant and hyena, plus hundreds of bird species. A total of 30 lodges have opened up, all focused on environmental sustainability and good stewardship of the land. 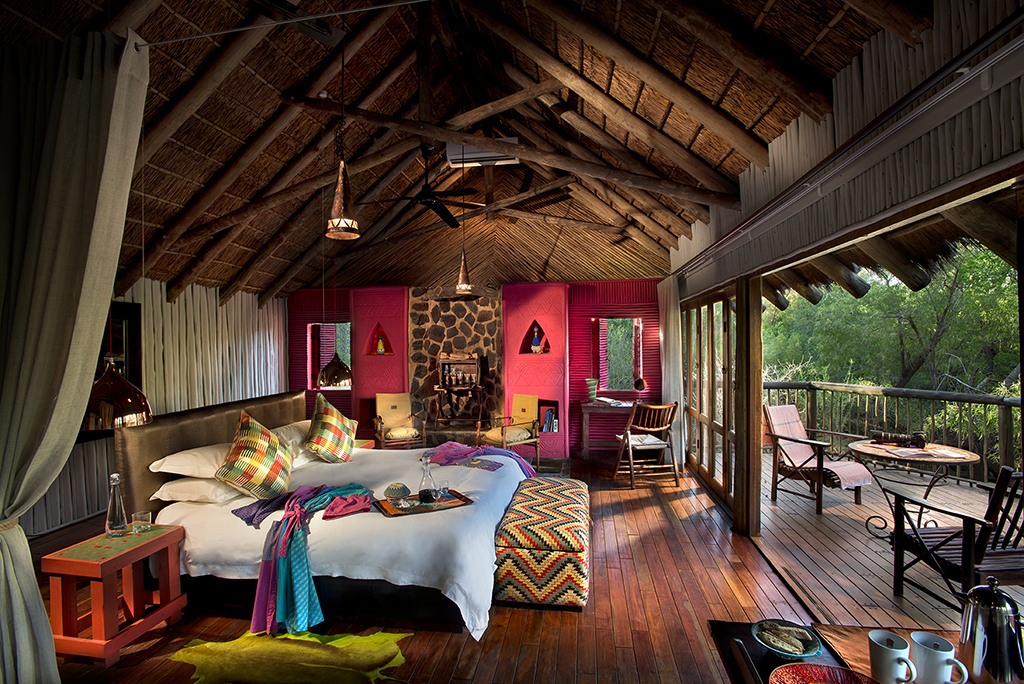 I arrive for a few nights at Jaci’s Safari Lodge, staying in one of their super-luxe tree houses. Active in both social and environmental sustainability, Jaci’s recycles grey water, uses non-toxic cleaning products, is involved in anti-poaching initiatives, empowers staff by granting them shares in the business, and hires heavily from the local community.

My guide, David, also tells me that funds from these lodges have sent local kids to school—and then onto university, and that employment and part-ownership at the lodges has empowered the local population. He adds that the reserve’s unique position between desert and “bushveld,” a subtropical woodland, ensures great biodiversity and a broad spectrum of animals. 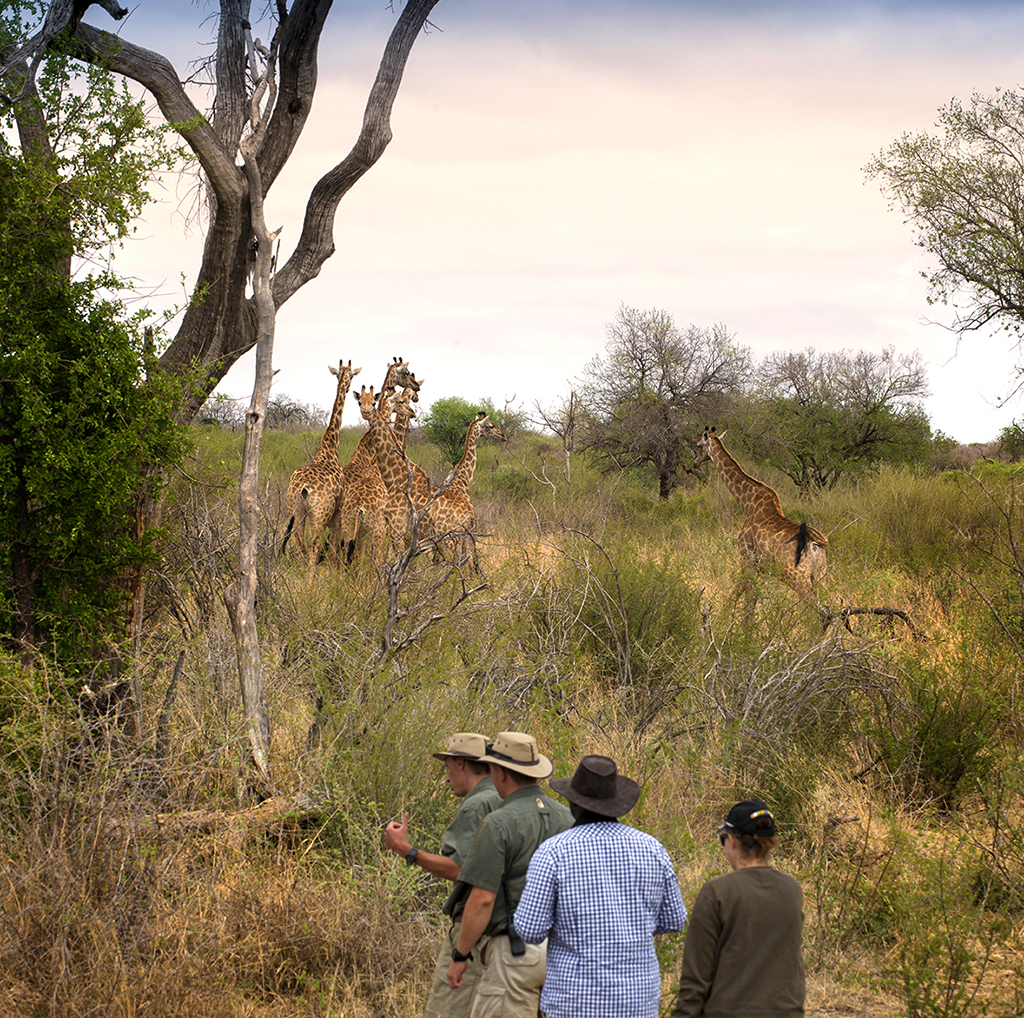 I arrive tired and in need of a little down time, so staff set me up with a book, and a drink, on a platform near the Terrapin, a “photographic hide.” A sort of bunker, it’s built into a watering hole, accessed by a subaquatic tunnel. I check it out, peering at nothing but murky water and empty banks from its open windows, perfect for surreptitious, up-close animal photos. But soon enough, silent and huge, a family of elephants approaches the pond, here for a drink. Snapping out of my reverie, and dropping my gin and tonic, I rush down from the platform and into the tunnel. The windows are now full, providing a panorama of the wild, the elephants impossibly massive, so close I feel I can reach out and touch them.

Over the next few days, taking drives with David, I get up close and personal with other animals. While snapping photos of white rhinos happily munching away on grass, impervious to our presence, David gets reports of wild dogs in the area. Racing away, we pass a pride of six lions, ears up, hunting. I ask him whether the dogs and cats would ever get into a fight? “Oh, no,” he says, shaking his head. “The dogs would just run away.” 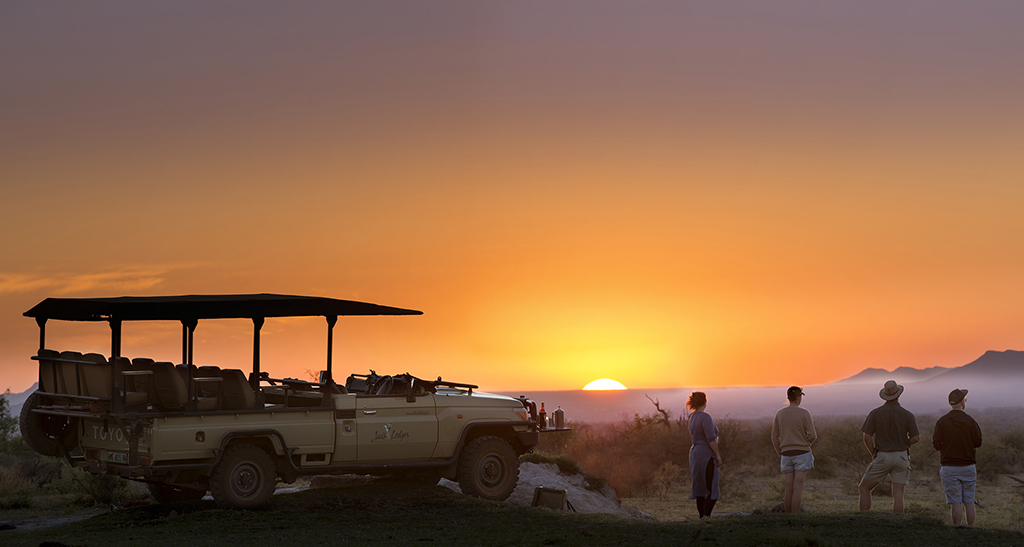 The magic of an African sunset.

We slow things down, taking a walk through the wilderness, seeing termite mounds and a rhino midden and elephant footprints, and a giraffe, eying us carefully, at close range. At Morukuru, a nearby lodge, one also committed to sustainability, I take that ride with Shane and Msongeya after dark. Spotting the lioness moments before she closes the final distance on the bat-eared fox, the latter emerges from the long grass, heading straight for our jeep at an impossible speed.

The smaller of the two, he doesn’t divert, ducking beneath the vehicle, just low enough to maintain a straight line and emerge on the other side. Microseconds behind, the lion is forced to veer off, just brushing the leg of tracker Msongeya as she makes a last-minute turn to the right. The fox lives another day and I take a deep breath, not quite believing what I’ve just seen. Three decades ago, it would’ve been impossible. But now, it’s just another day of drama here at Madikwe.

A COMMITMENT TO CONSERVATION

In the years that have followed Operation Phoenix – which transported and transplanted some 8,000 animals at the advent of Madikwe – continuing efforts to patrol and protect the park have led to a flourishing wildlife population, with all of the Big Five, plus wild dog and cheetah, numerous other land mammals (including 14 types of antelope) and more than 350 species of birds living within. And the social justice effort is ongoing, too, with a continuing focus on lodges hiring local, and giving these employees a greater share of the business (Jaci’s, for example, is now more than a quarter staff-owned). A new corridor is underway, to expand the protected area of the park, linking Madikwe with nearby Pilanesberg National Park.