At sea on the 64-guest windjammer Sea Cloud you might find yourself wishing the walls could talk. Built as a yacht by a cereal heiress nearly 90 years ago, the ship hosted heroes and despots, royalty and celebrities, and a long roster of the rich and famous who, no doubt, shared a few secrets.

You might find yourself, as my husband and I did, in a stateroom with a drop-down desk where author James Michener once wrote while he sailed. Or hanging out in a space where starlets flirted with Ramfis Trujillo, son of the Dominican Republic dictator Rafael.

When you sail on Sea Cloud, you’re on a ship that has seen glory days and stormy times, which only adds to its allure as we learned on a wintertime sailing in the Caribbean. 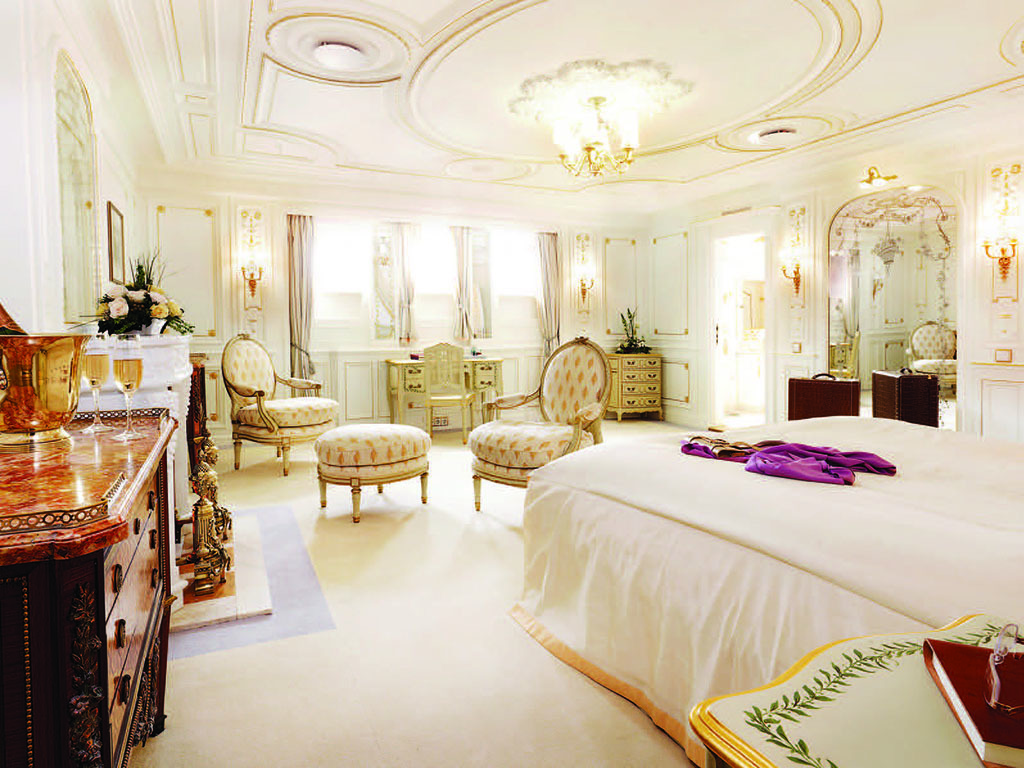 The history of this tall ship starts with General Foods heiress Marjorie Merriweather Post and her second husband, Edward F. Hutton, name-sake of the brokerage firm E.F. Hutton. He had other yachts, all with black hulls and named Hussar. She, one of the wealthiest women of her time, decided that the next vessel would be the grandest and largest ocean-going private yacht in the world.

Originally named the Hussar V, Sea Cloud was built in Germany, and debuted in 1931, with a crew of 75.The interior was done by Marjorie herself, who had decorated her many homes including her Palm Beach estate, Mar-a-Lago.

In designing the ship’s 10 original staterooms and public rooms she set up a warehouse in Brooklyn as a staging ground, collecting antiques and costly fabrics and wall coverings from around the world and arranging everything on a layout of the hull she had drawn on the floor. She bought Carrara marble and solid gold fittings for the bathrooms, more marble for open fireplaces and perfumes to add to the paint so that each stateroom would have its own scent. 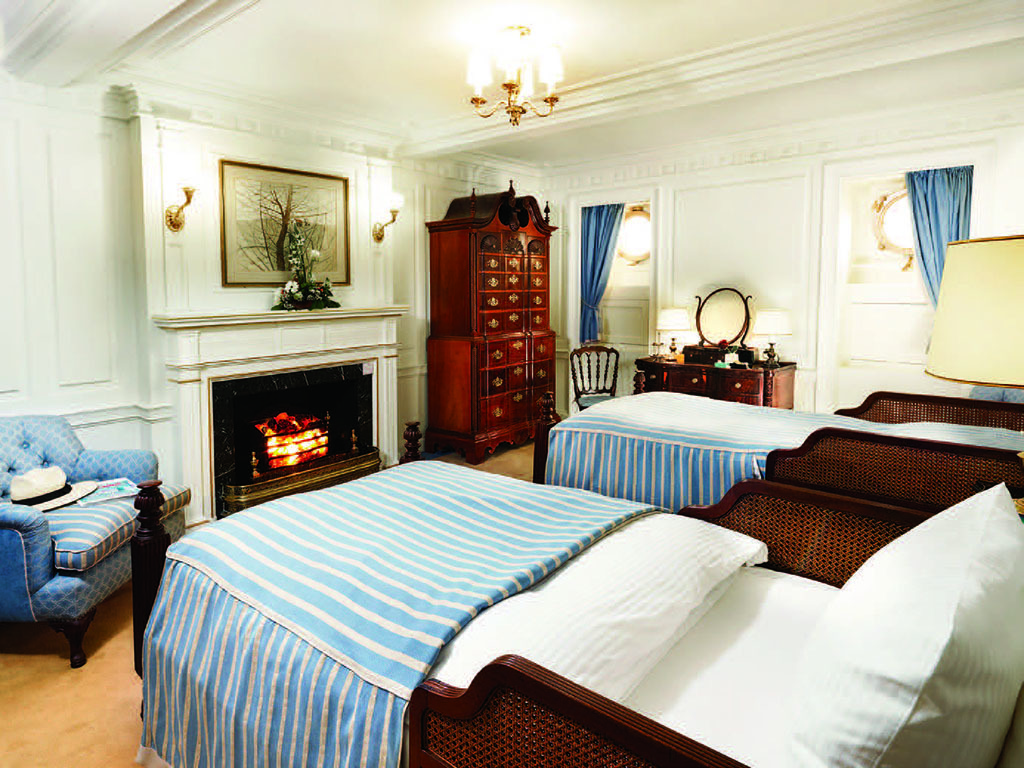 Today, guests can book the original accommodations, located down a winding staircase into the hull of the ship and with portholes for views. They include the extravagant suite of Post and Hutton – hers feminine, done up in cream and gold, with furniture that would be at home in Versailles; his dark, woody, as masculine as an old-time men’s club.

On each cruise, the ship holds an open house one evening, which assures that guests staying in the other rooms – modern accommodations with windows or former officer’s quarters with upper and lower beds – get time to ogle the original lodgings.

The Huttons sailed the world together until their marriage ended in divorce in 1935. Marjorie renamed the ship Sea Cloud and painted the black hull white.

Sea Cloud hosted the political elite when Marjorie’s third husband, Joseph Davies, was named ambassador to Russia. Later, without sails, the ship saw duty in World War II as a U.S. Coast Guard vessel. Eventually it was sold to Rafael Trujillo, whose son docked the ship in Los Angeles and invited movie stars onboard. But it was unused and rotting when a group of businessmen from Hamburg, Germany rescued Sea Cloud in 1978. 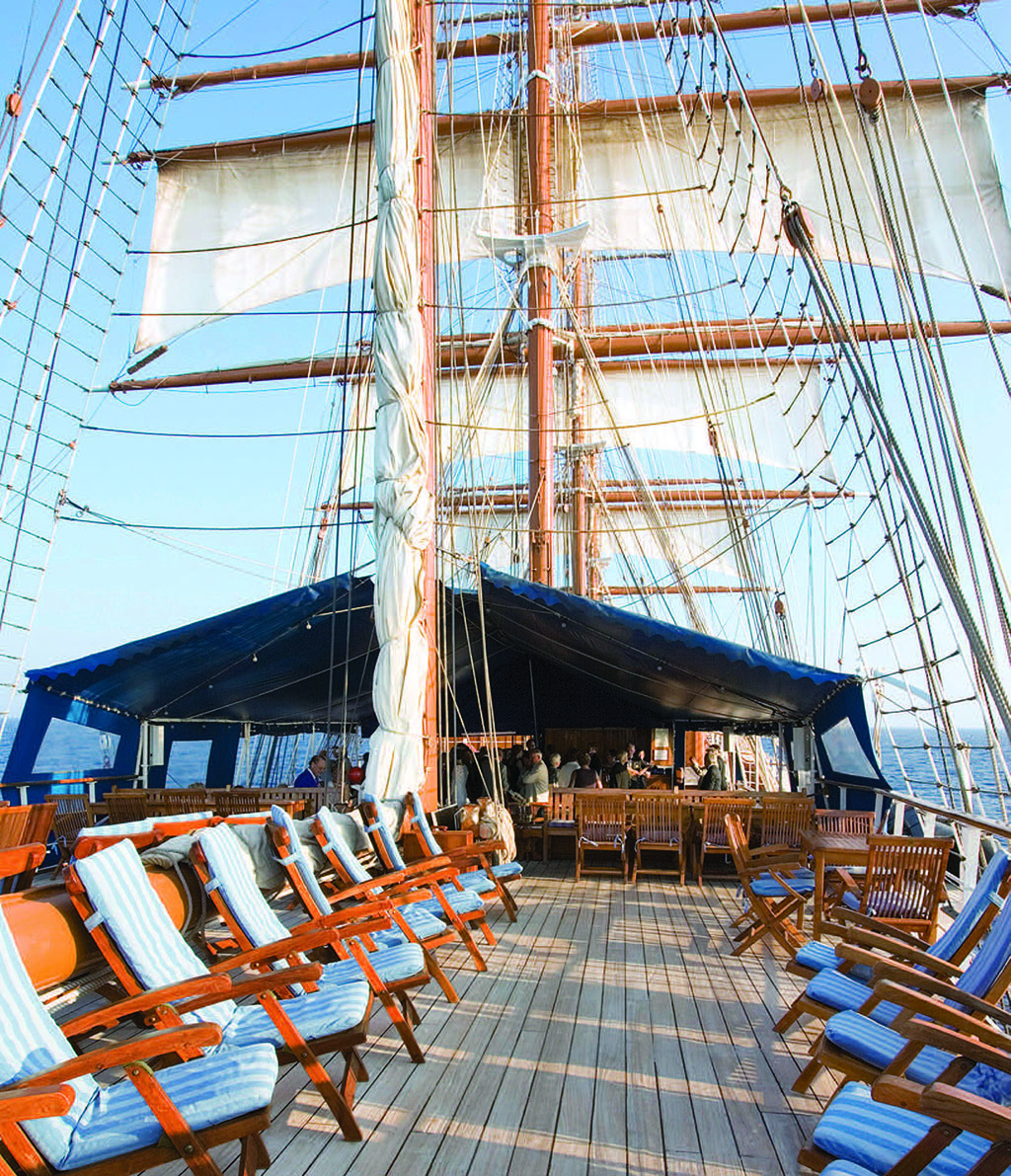 Gutted, remodeled and updated, Sea Cloud is today a wonderful match up of old and new. A cushy dining room and parlour feature wood panelling (these days with fireproofing underneath), black and white photos, oil paintings, antiques and other lush furnishings that all speak of old money. But the experience feels anything but stodgy.

Today, well-heeled international guests, predominantly from Germany and the U.S., come on-board attracted both by the history and the rare opportunity to actually sail – some guests even refer to themselves as “sailors.”

While 18 among the 59-person crew are dedicated to raising and lowering the sails, guests can pitch in. You aren’t allowed to climb the tall masts, but you can help pull heavy rope through a sizeable pulley– after you get a safety briefing. It’s a fun exercise and a great photo opp.

Otherwise, during daytime sailing hours everyone hangs out on the expansive open decks, curling up in lounge chairs, reading, socializing, watching reflections of the sun on the sails or lulled into a nap by the slight rolling, even in calm seas.

The onboard atmosphere is casual by day, slightly fancier at night. The nightly cocktail party at the open-air bar is accompanied by tunes from the ship’s piano player. The multi-course evening meal in the dining room and parlour is like a big dinner party, come in your jacket and tie or in a polo shirt and khakis, your choice. 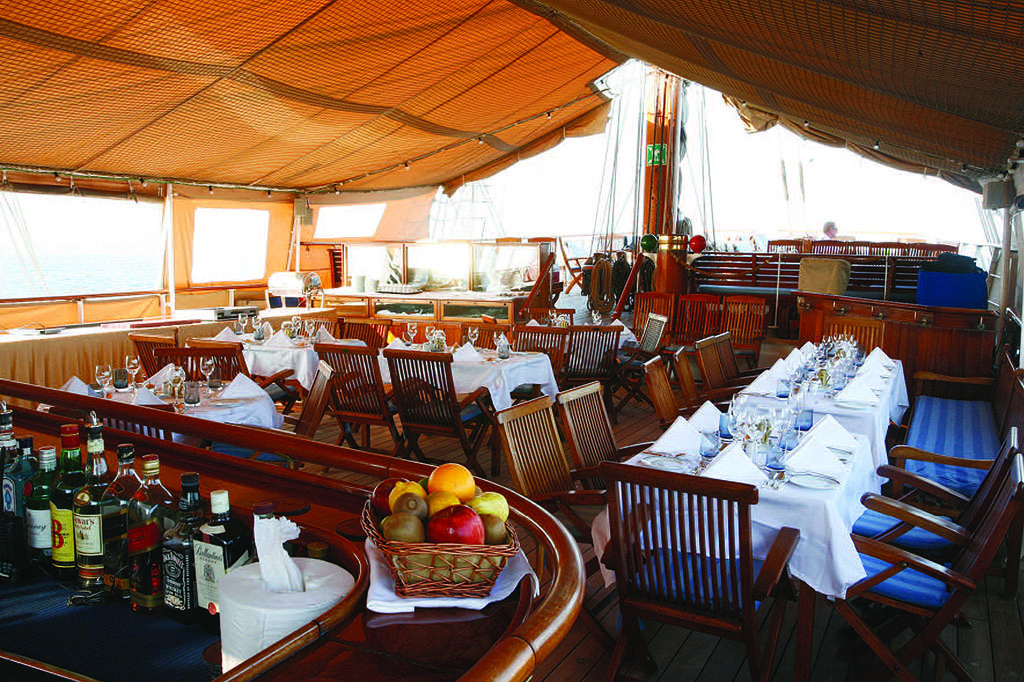 Weather allowing, the crew lures guests outdoors for dinners too, one night for a BBQ featuring a whole pig, another for a buffet with copious amounts of seafood.

Lunches are served buffet style on deck, with treats such as fresh fish, procured that day and sliced and grilled by the chef before your eyes. Fans of French cheeses will love the daily displays. Superb pastries make it equally impossible to keep your vow to watch calories. Good international wines and beer are complimentary at lunch and dinner.

One evening after dinner, the crew gathers everyone outdoors at the 24-hour bar for a performance of classic sea shanties, guests given sheets of lyrics so they can singalong. Other nights you might head to the hidden sundeck up on top of the ship for stargazing. 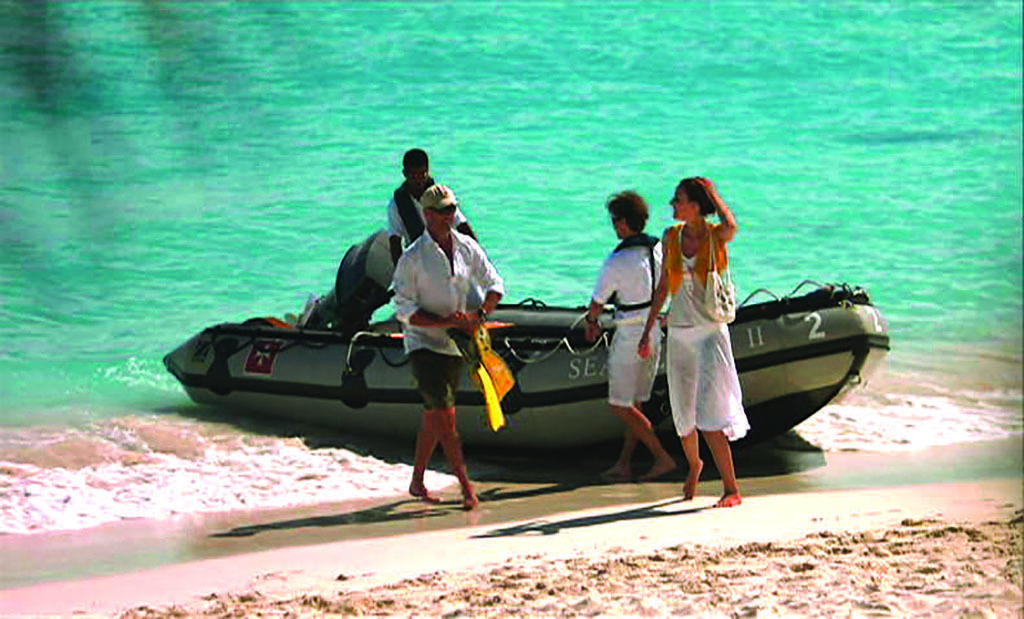 
Sea Cloud is a destination unto itself, but on a Caribbean sailing you also visit smaller islands where guests lounge on idyllic patches of sand, snorkel or head off on included tours – such as to see the natural rock grottos known as “The Baths” on Virgin Gorda. On a one-week British Virgin Islands and Lesser Antilles sailing from Antigua to Barbados, there’s time to lounge at the rustic beach bars of White Bay on Jost Van Dyke and walk the quaint French-influenced streets of Îles des Saintes, with two days to explore St. Barths.

A highlight comes on a calm day when guests are invited to jump off the ship’s ladder and swim to an island of floats carefully laid out by the crew. Another day, with the vessel fully rigged, a Zodiac takes guests around the ship for photos.

You’ll want those photos because being on this grand dame of a ship, you too will have stories to tell.

Making the Most of Maui: Fairmont Kea Lani