Cruising Canada: Thousand Islands – Set Amidst the Splendour of the St. Lawrence River, A Voyage Here is a Journey of Discovery

IN SOME WAYS, it’s a world hidden from millions, skirted and passed by multitudes of drivers every single day, a place of blue water and little islands and tiny straits and tucked-away homes. And, of course, the occasional castle. Every turn is a new discovery, each moment, a novel revelation. Yesterday, on a helicopter tour from the town of Gananoque, I had seen it all from above, the sweep of the scenery spanning two nations. And now, on the water, for several days, I will experience the secrets of this river and this region. And at the moment, I’m happy to sit on the top deck, pull up a chair, sip a beer, and watch it all unfold.

Set a couple of hours northeast of Toronto, Ontario’s Thousand Islands region is a famous place, drawing tourists from around the world. Though it’s set in one of Canada’s most populous areas, just a fraction of those living nearby visit, and even fewer get to see it like this. So much of the beauty here is unlocked on the water, and, cruising on a five-day, four-night voyage aboard a small ship with St. Lawrence Cruise Lines, I get to see its most intimate corners, in detail. 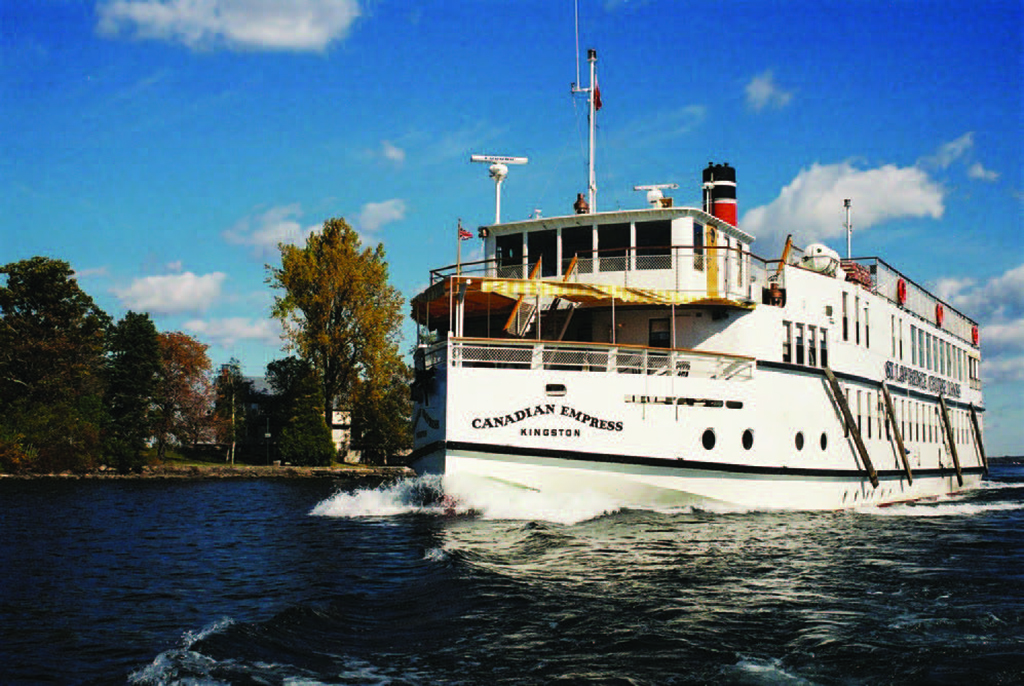 Arriving in Kingston, I board the Canadian Empress, which docks right in the heart of the city. Built to replicate a 1908 steamship (but actually launched in the 1980s), the Empress carries a maximum of just 66 guests, creating a level of familiarity among those on board that exceeds even that experienced on European river ships.

A brand-new renovation has overhauled both staterooms and public spaces like the Grand Salon, completely transforming this dining and lounge space from a dark, Victorian area to a bright one, adding shades of white all over, plus a marble bar, and new windows that showcase the moving landscape outside. “After all, we’re on board to see the river,” says owner Jason Clark, who is aboard during my voyage. 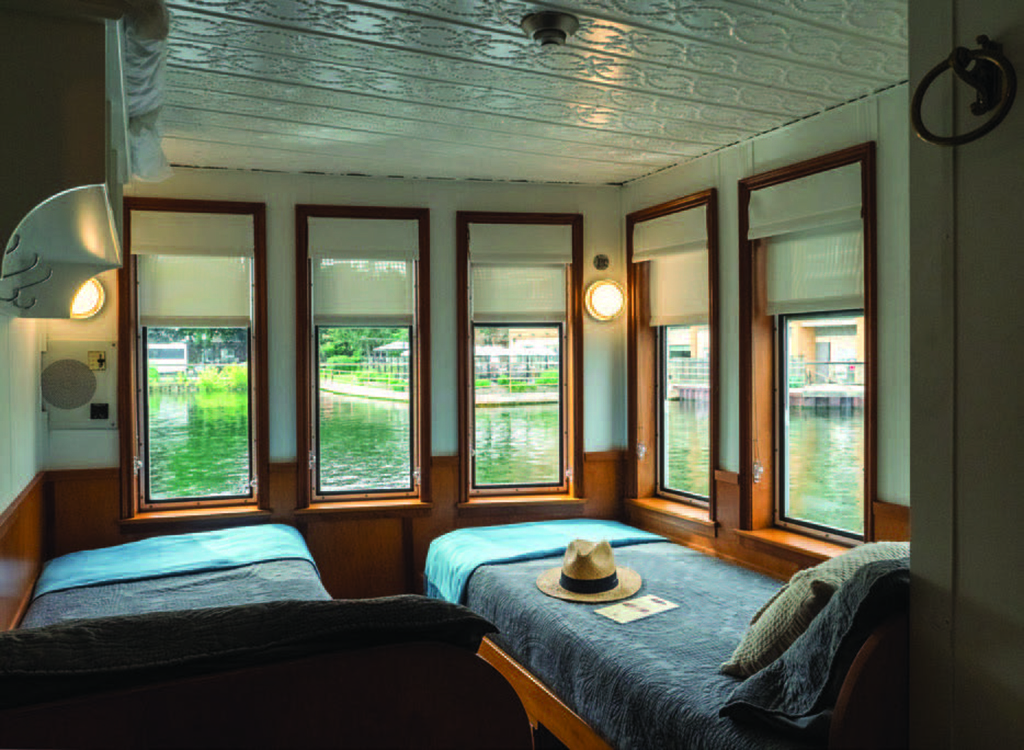 He notes that this one-ship line has been family-owned since its inception, his father and uncle running the company prior to his ascension. The updates were a labour of love, he says, and an attempt to fuse the original vision for this ship with the demands and desires of modern cruisers. Entry-level staterooms are small and spare but comfortable, most with two single beds, although bathrooms were updated in the refit, with new sinks and vanities. (Larger suites near the bow offer a double bed, and quite a bit more space.) The ship itself is compact, but personal, with three decks, including a sundeck with a shuffleboard court and lines of new-feeling deck chairs, a favourite gathering place for those on board.

Soon after leaving the city, we’re in the heart of the islands. The St. Lawrence is a mighty river, emptying the entirety of the Great Lakes into the Atlantic, but here, it feels like dozens of small straits, dotted with more than a thousand islands. (Trevor Houle, the chief purser and a precise man, tells me that the archipelago actually contains 1,864 islands.) Every minute on the water brings a new tableau – over here, a barren islet that looks like something painted by the Group of Seven, or over there, a homey scene like a colourful wooden cottage, elevated over a rock face, a couple of people waving from a spacious deck. Around another turn, a lighthouse, seeming to hover over cool flow. Up above, soaring spans connect two nations, the big suspension bridges joining Canada with the United States. 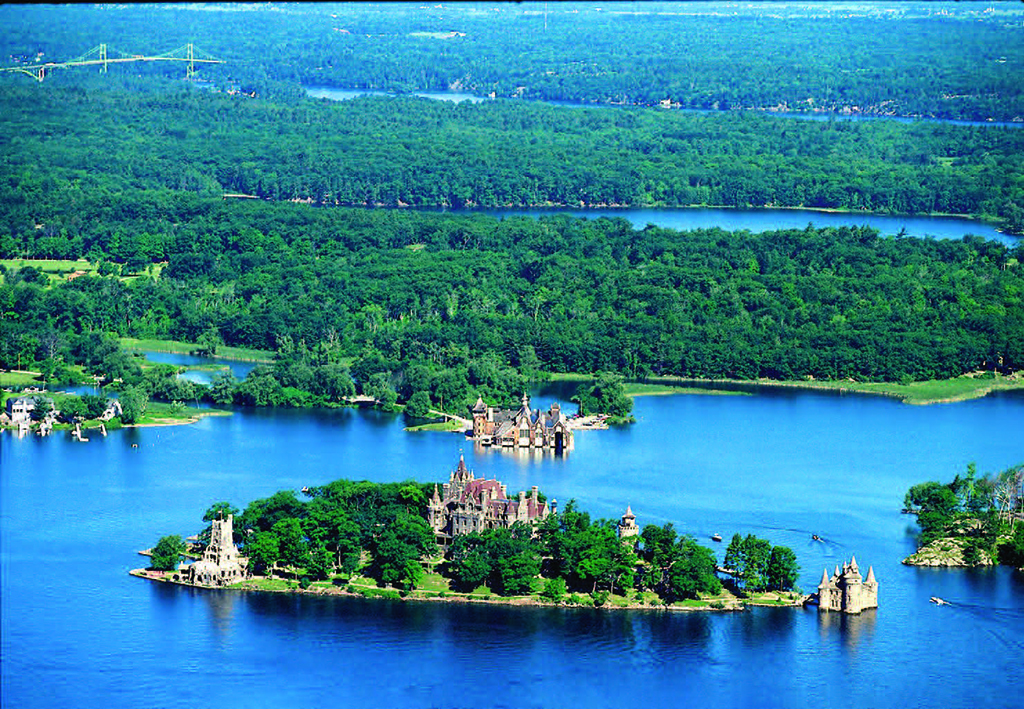 We sail Millionaire’s Row, where the wealthiest beneficiaries of the Industrial Revolution arrived when they came north, starting in the 19th century, to build “cottages.” Actually, massive castles, these were rambling retreats where they spent summers soaking up the sun and breathing fresh air, far from their belching factories in the city. The two most famous, which still remain, are Singer Castle, commissioned by sewing machine magnate Frederick Bourne, and the magnificent Boldt Castle.

The latter, which we circumnavigate, Smith providing commentary to me on the top deck as we sip glasses of wine, is the subject of many legends. Constructed on Hart Island as a gift to his wife by hotelier George Boldt (who famously ran New York’s Waldorf-Astoria), the building boasts 127 rooms, including 30 bedrooms, plus a Roman-themed swimming pool and a working elevator (a wonder back then). The tycoon even re-shaped the island to form a heart. But work here abruptly ceased in 1904, when Boldt learned of the untimely death of his wife, Louise. He never returned.

Making a visit to the wheelhouse, Captain Tristan McCoubrey tells me that this is a special river. Sitting behind a big, wooden pirate’s wheel, and constantly making adjustments, he remembers when he started sailing the St. Lawrence with his grandfather as a small child. And while he later worked on Great Lakes freighters and tuna-fishing boats off the west coast, these islands brought him home. 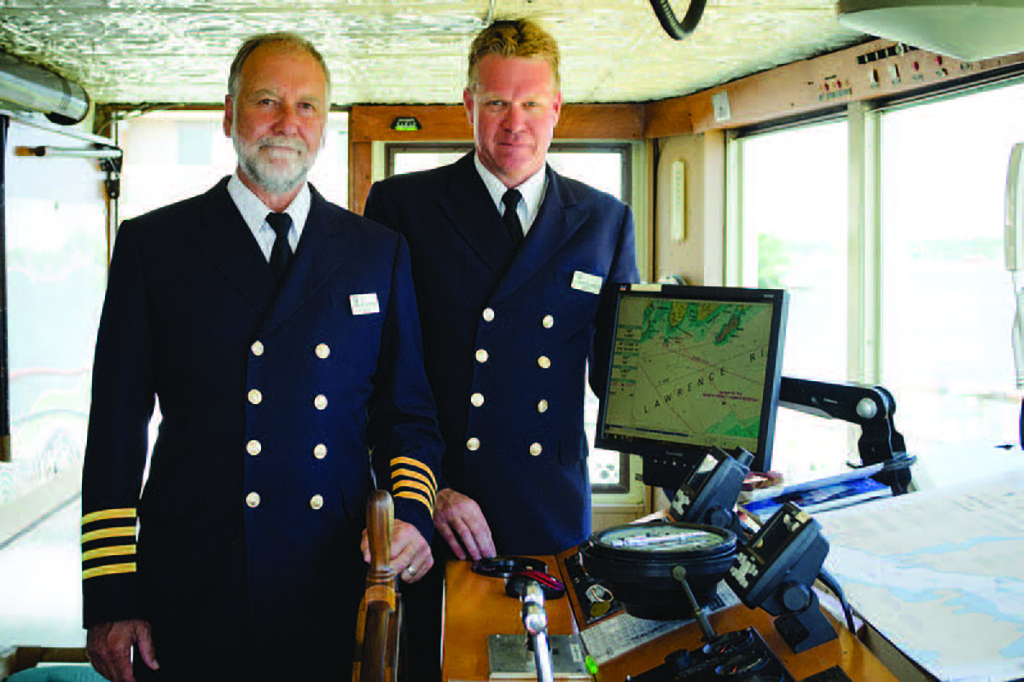 “This is our backyard,” he says. Mate Ross Richardson, standing by his side, adds, “We’re from the area, this is our way of life – we enjoy this river, even when we have a day off, we are out here in our own boats.”

And I enjoy it too, hopping off for shore excursions to places like the Fort Wellington National Historic Site and Upper Canada Village, where costumed interpreters take us back to the 1860s, playing some period tunes on a fiddle. We also learn the fascinating story of the Lost Villages, whole communities wiped out by the development of the St. Lawrence Seaway. 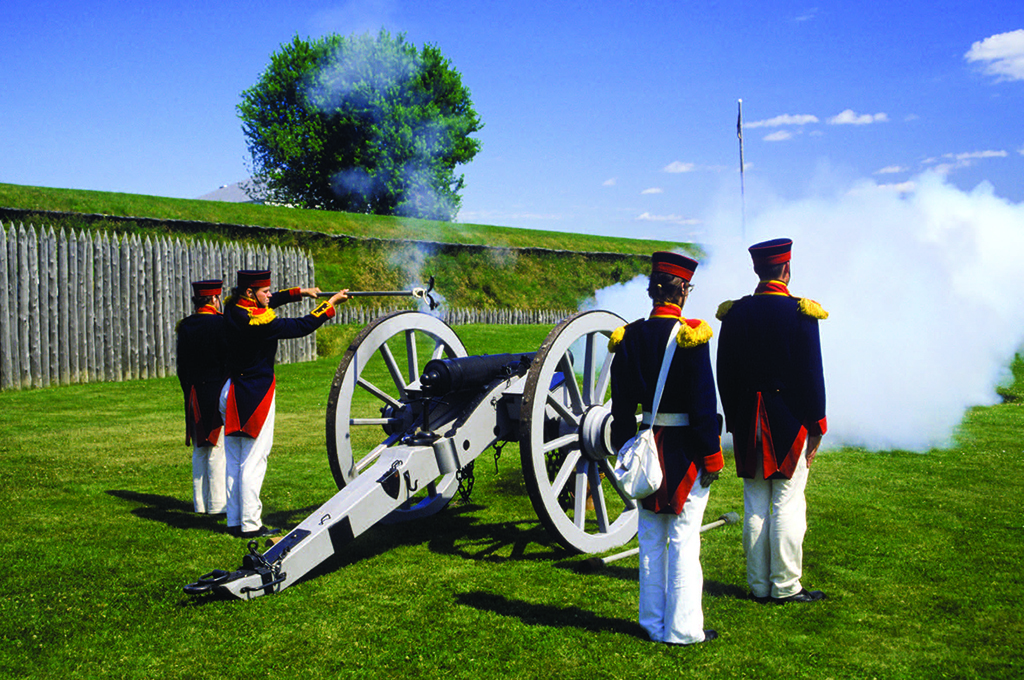 I explore on foot, walking the waterfront in small towns like Brockville and Prescott, places I’ve driven past, but never seen.

Back on board, life is relaxed, the top-deck shuffleboard court busy, the chairs on the stern usually filled with guests enjoying a cocktail from the nearby bar.

We proceed through big locks and past massive cargo ships, their decks dwarfing us, the bridge announcing their size and ports of origin, often from across the world.

Making our way back to Kingston, I pull up a lounger on the top deck. The sun is setting, islands stand on our horizon, and one of the big bridges looms, ahead. The voyage will soon end, but right here, I feel like I could stay in this hidden world, exploring all its eddies and coves and islets and islands, forever.

Written by Tim Johnson for Cruise and Travel Lifestyles (Summer 2021)

Video: Meet the Wine Maker in the 'Tuscany of Austria' on the Danube

This Entire Caribbean Island is now a UNESCO Biosphere Reserve