PONANT invites you to explore the world from your own home with their “Dreams of Elsewhere” selection of original destination content that will help you wait patiently while dreaming of your next trip. These out-of-the-ordinary experiences will inspire you, over and over again.

10 Things You Did Not Know About Antarctica

The “white continent” is known for its unspoilt splendour and surreal glacial landscapes. As one of the most unique places in the world, this region has many surprises in store and we reveal 10 facts you didn’t know about Antarctica!

1. It has an active volcano

At first glance, it could be an island like any other, but the fact that it is not entirely covered in snow should catch your attention… Mount Erebus, whose tip forms Deception Island, is the southernmost active volcano on the planet. It last erupted in the late 1960s.

2. There are no time zones

Because Antarctica is largely uninhabited and under international governance, the continent is not officially divided into time zones. The research stations choose which time zone to stick to: that of the country that finances them or that of the country geographically closest to their base (Chile for example).

3. It is the largest desert in the world

4. Argentina sent a pregnant woman there hoping to use the baby’s birth to claim part of the continent

This was in 1977. The little boy, Emilio Marcos Palma, was born there a few months later. He is the first known human to be born on the continent. The Antarctic Treaty already guaranteed international governance of the territory, but Argentina hoped that having citizens born there would make its claims more legitimate. Between 1978 and 1983, 8 Argentine babies were born in Antarctica.

5. It is not always polar cold

You may think temperatures are well below what you can tolerate. But cruises visit Antarctica between November and March, during summer in the southern hemisphere, and sail mainly to the northern part of the continent. In this area, on the peninsula, temperatures vary between -2 °C and 2 °C in summer. If you want to venture further south in the middle of winter, then woe betide you. The coldest temperature in the world was recorded there in 2010: -92 °C.

6. There is a Chilean village in Antarctica

This civilian settlement, which is also a research station, bears the lovely name of Villa Las Estrellas (“The City of Stars”). It is located on an island 120 km from the tip of the peninsula. Populated by 150 souls in summer and 80 (hopefully warm) souls in winter, Villa Las Estrellas has a primary school, a gymnasium, a post office and a rudimentary hospital.

You might think that freshwater would freeze in such a cold climate, but Antarctica has about 300 lakes. How is this possible? They are underground and kept at a temperature above 0 °C by heat from the Earth’s core.

8. It is the only continent where there are no reptiles

Because they are cold-blooded, reptiles depend on heat sources in their environment to get warm. They cannot survive in an icy region like Antarctica. So the penguins can sleep peacefully: there are no snakes to bother them.

9. The continent is home to around 90% of the ice on Earth

That’s 75% of the world’s freshwater. There are rocks and soil beneath all this ice – the continent is twice as big as Australia. Some of the icebergs are huge themselves: one has been discovered that is larger than Jamaica. At 11,000 sq. km, it is the largest iceberg ever measured.

10. You will never see the same thing twice

In Antarctica, each month offers different experiences. November is the beginning of summer: the icebergs are particularly massive, and the birds are courting and mating. In December, penguins sit on their eggs. In late December and January, the eggs hatch. In February and March, whale sightings are more common, and the chicks moult. Antarctica is not open to visitors the rest of the year: it is dark most of the time and temperatures are too low to bear.

A legendary land with a history of attracting the great explorers, the White Continent continues to exert a strong fascination today.

Embark for an Antarctic expedition cruise and sail along the continent's incredible coasts, admire its unique wildlife — from king penguins to whales — and navigate through immaculate white scenery, where icebergs glimmer and shine in an explosion of blues, from turquoise to the darkest of tones. 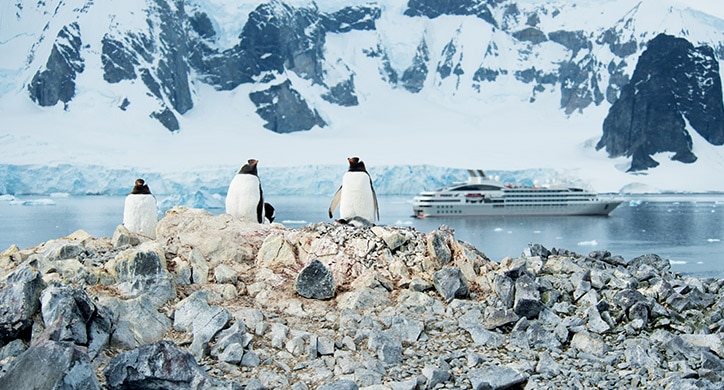 View Ponant’s Luxury Expeditions to Antarctica which not only give you the chance to travel on board a luxury ship, but also to enjoy top-quality services and many inclusions to make you feel like you’re travelling on a private yacht with no more than 200 of your fellow guests.

• Life onboard is relaxed and refined, capturing the best of the French art of living well.

• Intimate yachts with a country club casual atmosphere onboard

• Expert team of guides, naturalists and lecturers on all voyages

• Complimentary unlimited Wi-Fi on board