THEY’RE OFTEN CALLED the ultimate bucket-list destinations. Antarctica and the Arctic have fascinated humankind since they were first seen hundreds of years ago. Their moody skies, thrilling landscapes and awe-inspiring ice floes have inspired explorers for centuries. Names like Franklin, Peary, Scott, Shackleton, Amundsen, Nansen and Borchgrevink are inexorably linked to the history of the poles. Many of those who came to these areas a century ago ended their explorations in failure, and even death, on their quest to reach the fabled North or South Poles. One hundred years later, the likes of Franklin, Shackleton and Scott would be amazed to see the kind of comfort and safety in which Antarctica and the Arctic can be explored.

Ultra-luxury line Silversea makes it possible to explore Antarctica and the Arctic in the most luxurious way while still offering its guests an adventure in the truest sense of the word. Its world-class expedition ships are adorned with amenities that the earliest explorers could only dream of. Bvlgari toiletries and Pratesi linens grace the accommodations of these all-suite ships. Butlers deliver afternoon canapés and offer up a hot drink, spiked generously, upon returning from a day’s chilly adventures at the end – or the top – of the Earth. Superbly tasty dishes are on the menu; a far cry from the hard tack and pemmican that made up the average polar diet a century ago.

Arctic and Antarctic exploring with Silversea is more than just a vacation. It is a rite of passage into an exclusive group of adventurers. To this day, few on this earth will ever lay eyes on such magnificent places – the Antarctic is a continent so large that it boasts four separate time zones but no permanent population. The only thing that exists there, at the edge of the world, are penguins, sea life, and the relentless creaking and groaning of the Antarctic ice. 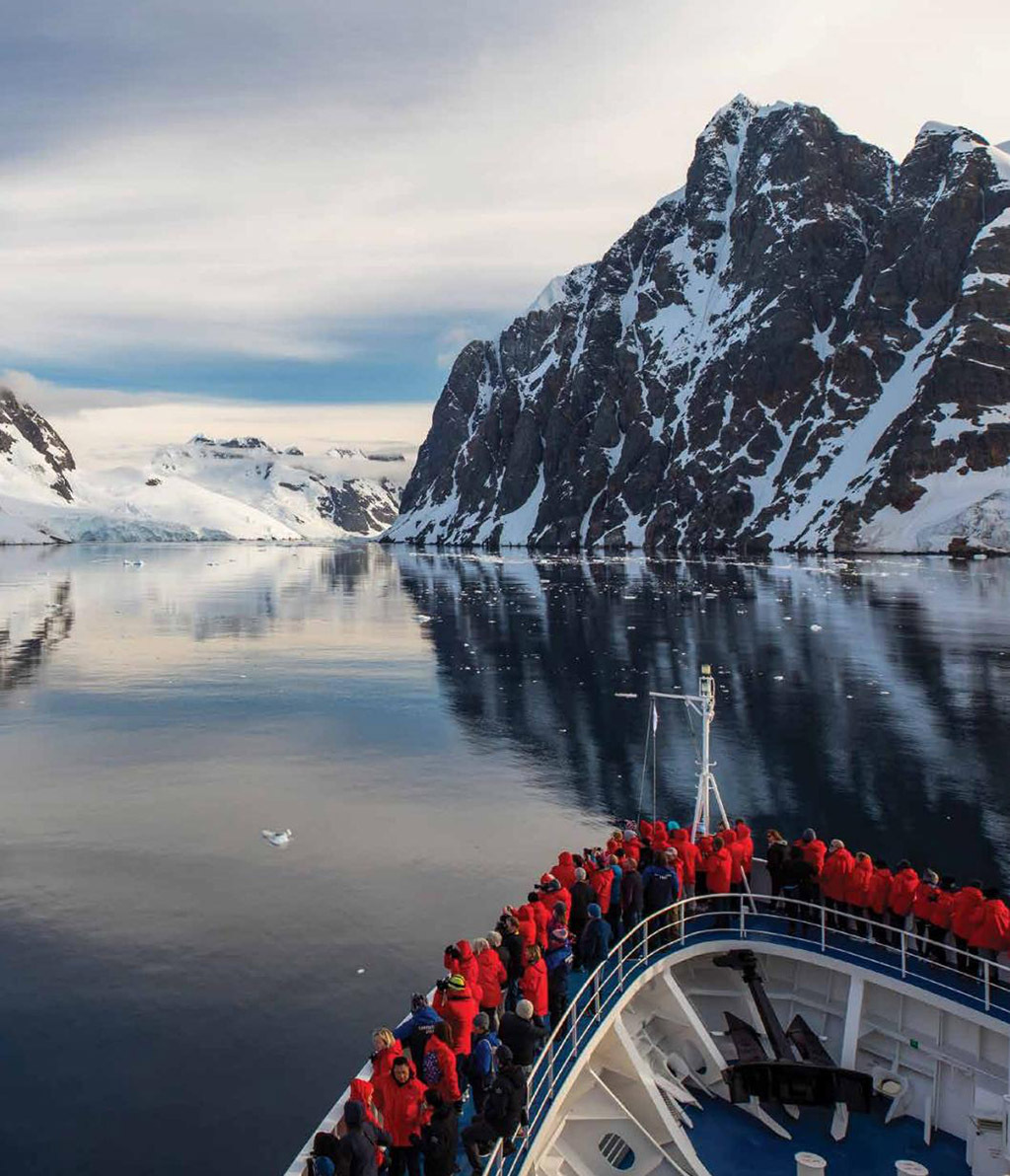 Reaching Antarctica with Silversea is deceptively simple. The line’s entire roster of expeditions to the Last Continent depart roundtrip from Ushuaia, Argentina. The southernmost city in the world, Ushuaia is conveniently situated next to the Drake Passage; a turbulent stretch of water that separates South America from Antarctica. Made fierce by the convergence

of currents from the Atlantic and Pacific Oceans, experienced Antarctic veterans know that reaching Antarctica requires a trip across this legendary stretch of water. But whether you will encounter “The Drake Lake” or “The Drake Shake” is up to Mother Nature.

Protected from the currents of the Drake, cruising through the Antarctic Peninsula is typically a serene affair, with temperatures that are typically no colder (if not warmer) than most Canadian cities in the wintertime.

The “classic” Antarctica cruise with Silversea Expeditions is a 10-day journey roundtrip from Ushuaia. Once in Antarctica, the ship’s exact route and schedule are determined by weather and local conditions. This gives the crew and Expedition Staff maximum flexibility to deliver the best possible experience here.

No two Antarctic sites are alike. There is the otherworldly sight of Deception Island, a sheltered harbour with remnants of fur sealing bases from the turn of the last century. Preserved by the dry air (Antarctica is technically a desert) and the cold, most buildings and outposts from the sealing and whaling trade you’ll find in Antarctica make you feel as if you’re taking a step back in time.

Another popular stop along the Antarctic Peninsula is Port Lockroy. A former British naval outpost and research station, it now features a small museum and the southernmost operational post office in the world.

Few things, however, prepare visitors for the grandeur of the Lemaire Channel. Named after Belgian explorer Charles Lemaire, it is one of the top sights for ships cruising to Antarctica, thanks to its sheer cliff walls, narrow passageways and reflective waters that stretch for some 11 kilometres. 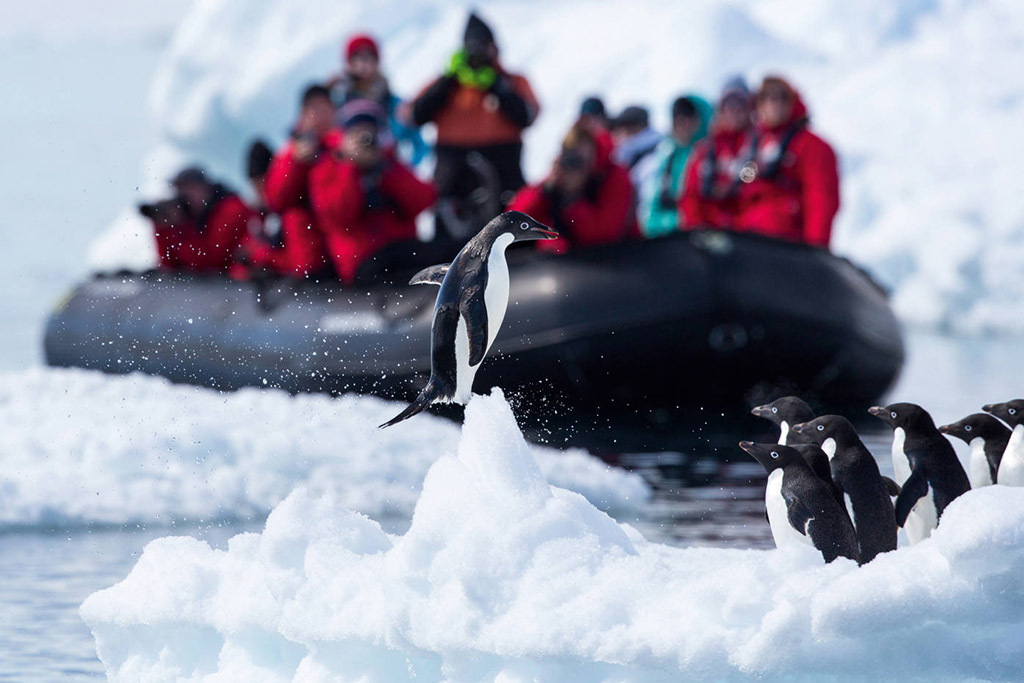 Arctic Adventuring – A Safari at Sea

Unlike the Antarctic voyages, which all begin in Ushuaia, Argentina, Silversea’s Arctic expeditions sail from several different ports and offer a fascinating range of sights and experiences. Your adventure could, for example, begin in the remote port of Kangerlussuaq, Greenland where, for generations, Crayola-bright buildings have served as beacons to guide fishermen back to shore.

Aboard Silver Cloud, you’ll sail past the famous Evigheids Glacier to Nuuk (Godthab), then onto Iqaluit – the capital city of Nunavut. In addition to a wealth of other ports, you’ll visit the ancient Viking settlement at L’anse aux Meadows where the

Norse explorer Leif Erikson and his men became the first Europeans to establish a colony on North American soil. There, you’ll marvel that the impressions in the soil, made by the walls of Leif’s sod and stone hut, are still visible. This incredible northern

expedition will then sail to Woody Point, in the heart of Newfoundland’s spectacular Gros Morne National Park, and on through the stunning Quebec Maritime region. A fascinating 13-port adventure, filled with the contrasting sights of rugged Arctic landscapes and charming rural fishing villages, your voyage will end in fascinating old Quebec City.

Silver Cloud doesn’t confine herself only to Canada’s coastline, instead plunging deep into the rugged heart of Manitoba, through the wild waters of Hudson’s Bay. One remarkable 27-day cruises takes guests through the iciest reaches of the world, beginning in Norway’s Longyearbyen and Svalbard – known as the polar bear capital of the world. A visit to Spitsbergen, located in the gorgeous Norwegian archipelago will also showcase a plethora of polar bears, especially early in the season.

Sail past the breathtaking Dynjani waterfalls, Prince Christian Sound, Cape Dorset, Lady Franklin Island, Iqaluit and more, to Churchill, Manitoba. There, in one of Canada’s wildest outposts, polar bears dot the shoreline and beluga whales regularly glide up to investigate the ship and her guests.

The smaller Silver Explorer also sails Arctic waters each spring and summer, offering such exciting itineraries as a 25-day Nome, Alaska to Tromsø, Norway journey. This ‘North East Passage’ route takes guests through a part of the world so remote that few people have ever heard of it, let alone visited. Guests will have the opportunity to experience a unique culture and view a wealth of whales, including Beluga and Narwhal, walrus and polar bears to name just a few. Truly the perfect cruise for wildlife lovers. 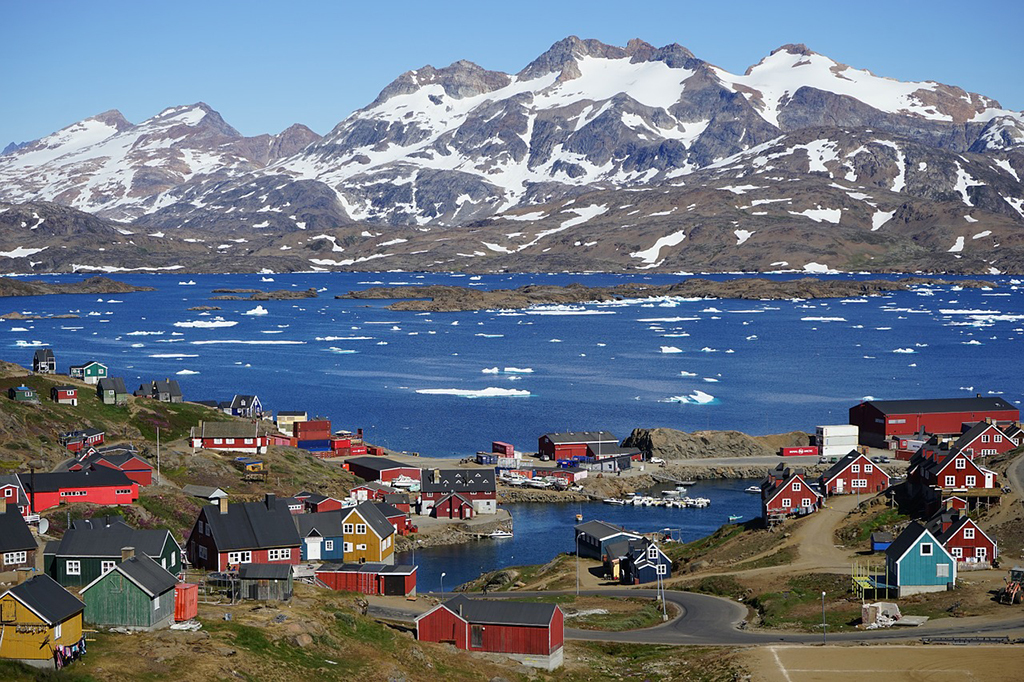 Silver Cloud in the Arctic and Antarctica

Silversea has been operating expedition cruises to the polar regions for more than a decade, pioneering the use of luxury vessels at a time when most expedition ships were converted Russian icebreakers and research vessels. These ships were functional, but not necessarily comfortable. Silversea currently offers two ships in Antarctica and the Arctic: the intimate 144-guest Silver Explorer and the 254-guest Silver Cloud. The latter began life as Silversea’s first ultra-luxury ship and in 2017 was converted into a proper expedition ship, complete with an ice-class hull, a new observation lounge, a fleet of Zodiacs and completely-refreshed public spaces and suites.

Small and comfortable, Silver Cloud is still large enough to offer plenty of big-ship amenities. These include a spacious, open-seating restaurant; the two-storey Explorer’s Lounge where lectures and daily briefings are held; a dedicated and cozy bar known as Dolce Vita; the Italian-themed La Terrazza Restaurant; the Zagara Spa and Salon; and the always-popular Panorama Lounge.

Onboard Silver Cloud, life is convivial and relaxed. From Tor’s Observation Lounge, perched high atop the ship, guests have breathtaking views of the Arctic and Antarctic majesty thanks to a 180-degree bank of floor-to-ceiling windows. Nearby shelves are stocked with books on wildlife and polar exploration, and the ship’s dedicated Expedition Team members routinely hold information sessions on the ship’s current position and likely wildlife sightings.

Thanks to the ship’s collection of nimble inflatable Zodiacs, Silver Cloud is able to land guests ashore in the most remote places. There are few landing facilities in Arctic ports and no docks in Antarctica, so all journeys to and from land are operated on the ship’s Zodiacs. With complimentary tours led by Silversea’s world-class expedition staff, guests can indulge in explorations ashore; scenic shoreline cruises; or voyages that get up close with towering icebergs and thrilling wildlife. 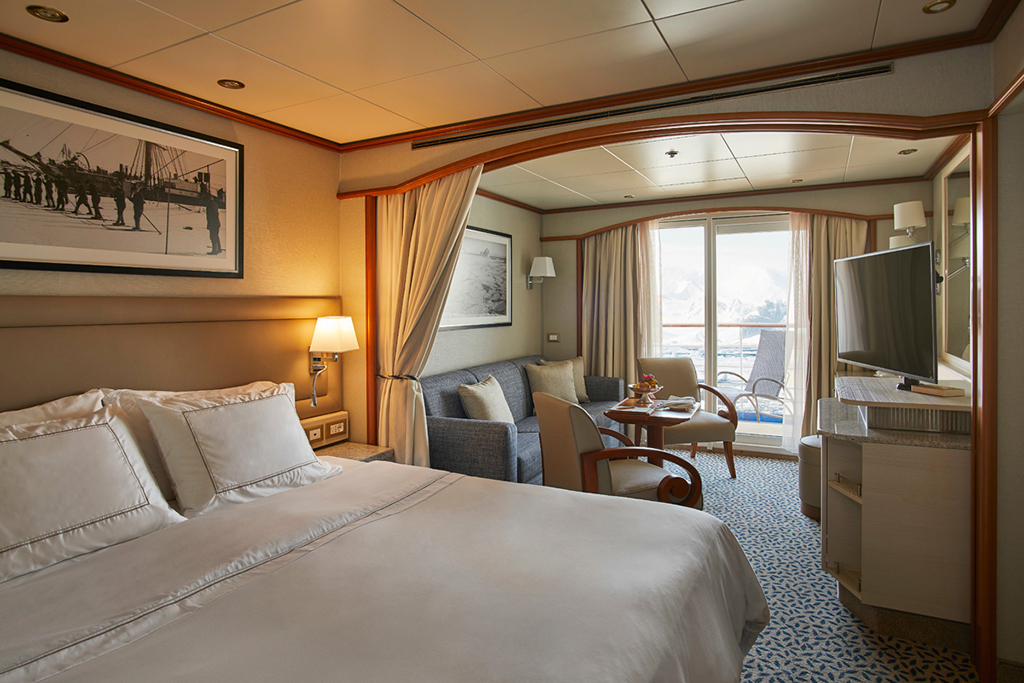 Navigating the Future of Polar Travel

While both polar regions offer pristine and dramatic scenery and the spectacle of remarkable wildlife there is no doubt that both the Arctic and Antarctica are under severe pressure and highly vulnerable to climate change. In both July and August 2019, massive amounts of glacier ice sheets melted – in one day alone in August, the earth lost 12 billion tons of glacier ice in Greenland. Sea ice is declining and this will dramatically effect wildlife’s ability to survive at both poles. Research continues and awareness is most certainly increasing and there are numerous conservation efforts underway to protect our oceans, these polar regions, the indigenous populations and to further responsible tourism.

A member trade association, the International Association of Antarctica Tour Operators (IAATO) has established extensive procedures and guidelines that facilitate appropriate safe and environmentally sound, private sector travel to the Antarctic. Part of their mission is stated as follows: “In a destination where no indigenous population exists to speak for itself, visitors return home as ambassadors of goodwill, guardianship and peace”.

The cruise companies that travel to the ends of the earth to show their guests some of the most marvellous places on our planet and to increase our overall awareness of both poles have embraced the conservation and preservation of these regions for current and future generations and take their responsibilities very seriously.

Written by Liz Fleming and Aaron Saunders for Cruise & Travel Lifestyles. All photos courtesy of Silversea

St. Lawrence Cruise Lines Confirms Operations for 2021, Season to Start in May

Holland America Line to Restart Cruising from Greece in August 2021

Video: This Hotel Has the Top Views of Edinburgh