Lindblad Expeditions celebrated the launch of their second new polar vessel, National Geographic Resolution, on her inaugural voyage to Antarctica, South Georgia and the Falklands. Under Antarctica’s clear blue skies and parked on fast ice in the Weddell Sea’s Duse Bay, guests walked onto the ice to cheer on Captain Heidi Norling as she christened the 126-guest National Geographic Resolution. 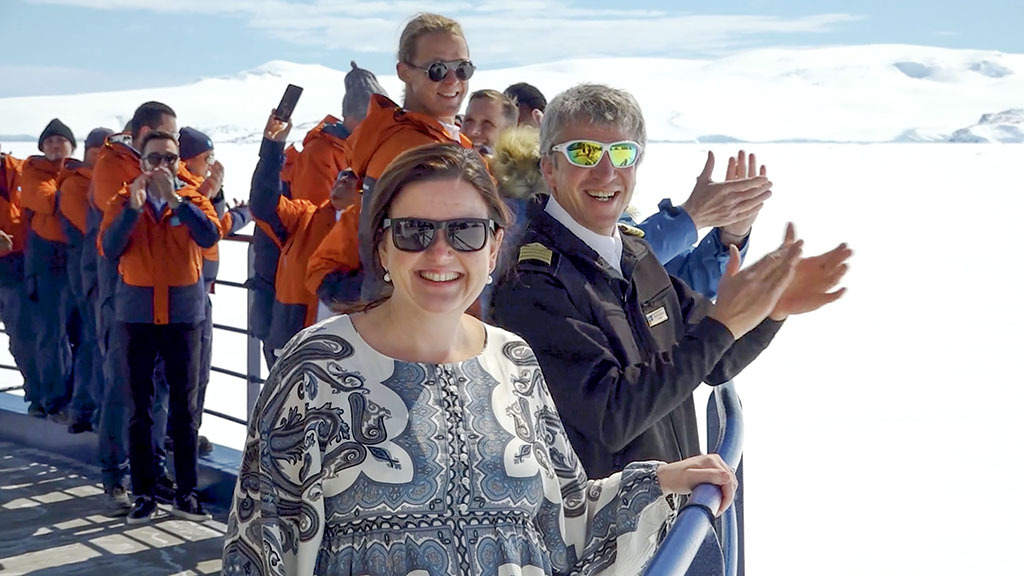 “I wish this ship calm winds, fair seas, and great adventures. May everyone who sails with her be blessed,” marked Captain Norling as she tossed the bottle. Following some remarks from Captain Martin Graser, guests, staff, and crew celebrated with a champagne toast in the time-honored tradition - with Adélie and gentoo penguins watching close by.

The occasion marked a major milestone for Lindblad Expeditions as the second polar new build in the company’s history—and their second vessel to launch in 2021. Both are in Antarctica for the season. “Seeing both of our new ships together in Ushuaia was very touching,” noted Sven Lindblad, Founder and Co-Chair of the Board, who just completed the inaugural Antarctica voyage of National Geographic Endurance. “They are extraordinary ships. We had very high expectations when we were building them — and their performance has far exceeded them.”

Named to honour the first ship to cross the Antarctic Circle in 1773—navigated by the legendary Captain James Cook—National Geographic Resolution is fully stabilized and features the patented X-Bow technology guaranteeing the smoothest, most comfortable ride in all kinds of conditions, and will enable guests to go where few have or can deeper into the polar regions. Her elegant interiors are Scandinavian inflected and offer the highest level of comfort afloat.

“There is over 1,000 years of combined team expertise that go into a moment like this, and what an amazing team it is. We are so proud of everyone that worked tirelessly to create this extraordinary ship,” said Dolf Berle, CEO, Lindblad Expeditions.