“Slow Down, this is Moloka’i,” read the hand-painted sign that greets me on the road leading out of the airport. With nary a car in sight, I can see why there needs to be a reminder, as the wide open road would most likely encourage newly arriving tourists to put the pedal to the floor.

I have just landed from a 25-minute flight from Honolulu on a 48-seat turboprop plane. Home to just 8,000 inhabitants and dubbed as the “friendly isle,” Moloka’i welcomes me with quiet roads. This is the Hawaii not too many people know about, which is exactly the reason I chose to visit. 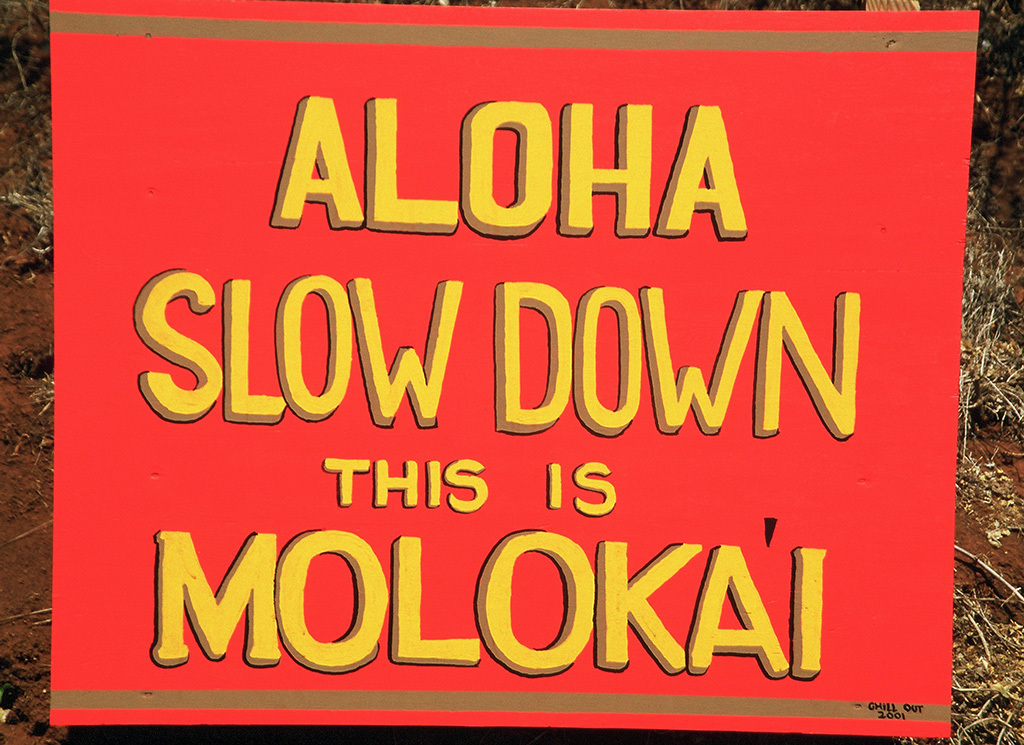 My home base is the charming Hotel Moloka’i, the island’s only hotel (all other accommodations here are condo rentals). Rooms are housed in Polynesian-style wood bungalows, with a lanai or balcony to enjoy the garden grounds or ocean views. A pool provides relief from the afternoon heat, and ocean-facing hammocks induce peaceful dozing to the sounds of the lapping waves.

My daily ritual involves driving across the island to explore the coastline and sleepy towns. In the middle of the week, the beaches are all but deserted, save for a few locals fishing, and families playing in the surf. In March, it is still winter here, and the surf is too high in most areas for swimming. On the south coast, I find great snorkelling on Murphy Beach, and on the west side, there is complete tranquility on Three Mile Beach, which is the state’s longest. During my many beach walks, I spy playful humpback whales off the coast, and the elusive monk seal basking on the rocks. 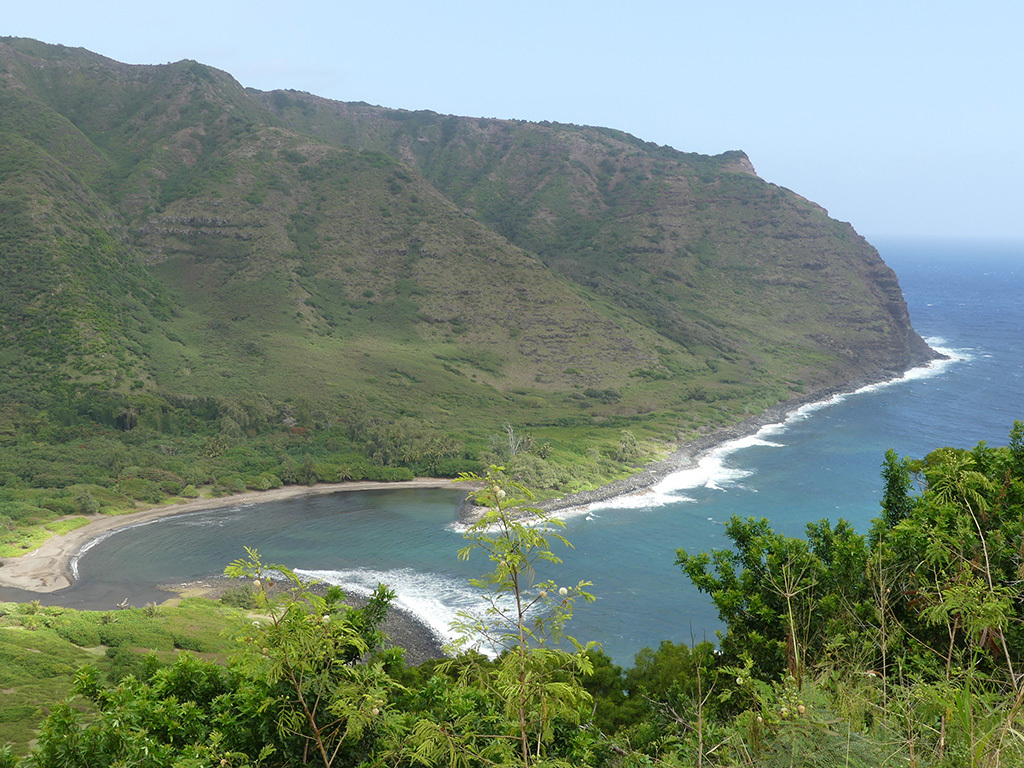 As darkness falls, a different kind of ritual takes place in the island’s main town of Kaunakakai, practiced by countless locals and tourists. Back in the day - I was told by a local - it used to involve walking down a dark alley, knocking on an unmarked door, and an exchange of money for a surreptitious package. Today the alley still exists, but the door has been replaced by a well-lit window, and a sign advertises the not so illicit commodity: “Hot Bread.” This is Moloka’i’s famous product, made fresh every night by Kanemitsu’s Bakery. A posted white board lists the options available: strawberry, blueberry, creme-cheese, cinnamon butter, with prices for one, two, three toppings, or “the works." Taking the advice of the cashier from the grocery store across the street, I order my round loaf smeared with cinnamon butter. As I eat mouthfuls of the hot, fluffy morsels saturated with buttery spice, I muse at the fact that such a simple staple can bring such immense pleasure. I could have easily eaten more than half the loaf, but my mother’s wise words came into my mind: “Don’t eat it all at once, or you’ll get a tummy ache!” A test of willpower indeed! I manage to save the rest for tomorrow’s breakfast, to go with my Moloka’i coffee. 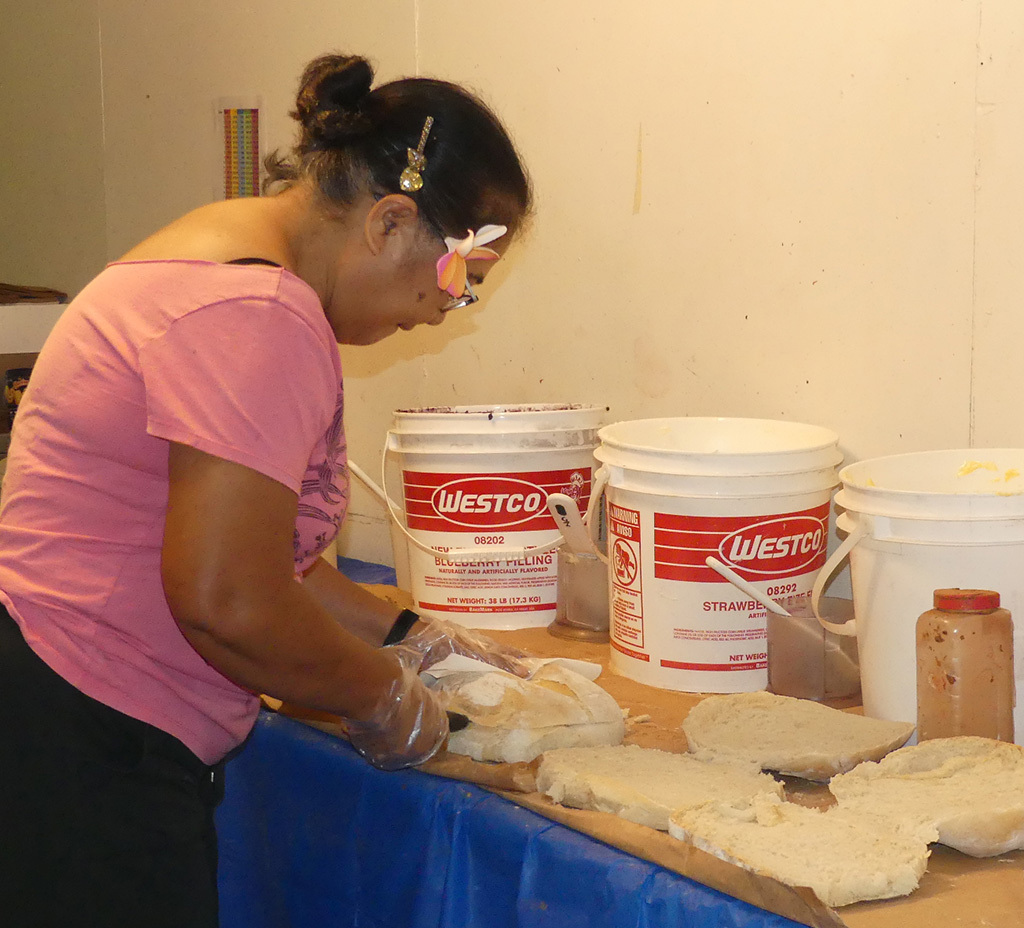 At Purdy’s macadamia nut farm just west of Kualapu’u village, I learn that Hawaii’s most prized commodity is actually a native of Australia. The plant was introduced to the islands in 1881, Hawaiians were the first to create machinery to process the nuts. I wonder how the Australians feel about missing out on being the creators of the world’s most delicious souvenir!

The growing cycle from flower bud to mature fruit takes twelve months, and the nuts are harvested once they have fallen from the tree. After being sun-dried, they are shelled and roasted. A table with grippers and a hammer invites me to pound open the nuts and enjoy a tasty treat. Raw macadamia nuts contain no cholesterol, and have half the calories than store-bought ones - because they lack the additives, preservatives, and of course, the ubiquitous chocolate coating. Oh good, I can eat a few more without feeling guilty. 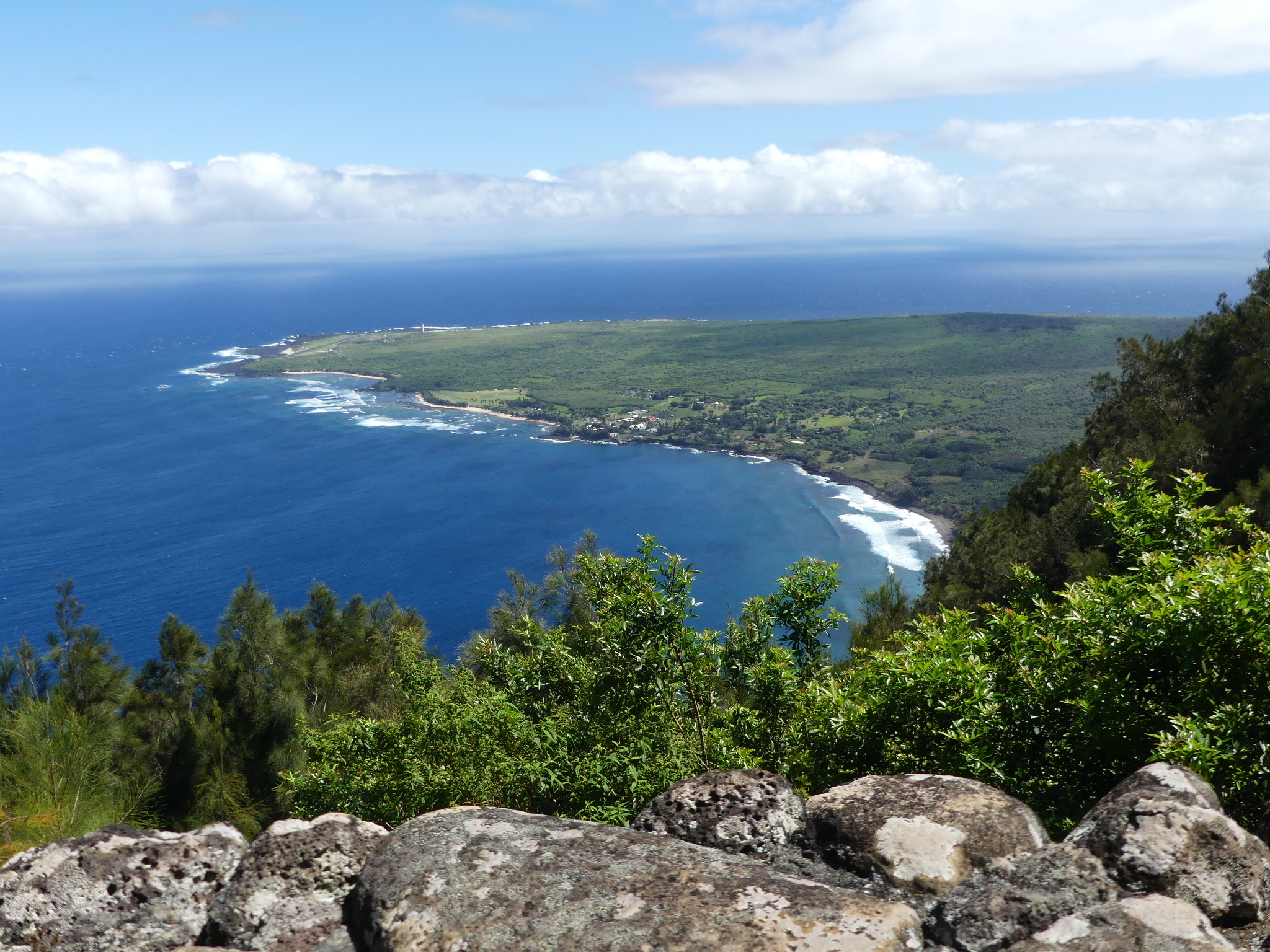 
Moloka’i’s most famous attraction is remote Kalaupapa peninsula, which was home to a leper colony in the 1870s. Located at sea level on the north shore, Kalaupapa is closed off from the rest of the island - and the world for that matter - by the world’s tallest sea cliffs, measuring 1,600 feet. Our guided tour takes us through the settlement, churches, cemeteries, and mass burial grounds. 8,000 souls afflicted by Hansen’s disease (leprosy) lived and died here in banishment, until a cure was discovered in the 1940s. The tour highlights the selfless dedication of Father Damien and Mother Marianne in embracing those with the debilitating disease. Their story is a true testament to human kindness, and a visit here is indeed an emotional journey, with time to reflect on both the cruelty of the disease, and the compassion of the human heart. [Note: Until further notice, the mule and hiking trail down to Kalaupapa is closed for repairs. Tours of Kalaupapa are only available by taking a short flight from the Moloka’i airport.]

My most memorable day on the island is spent in Halawa Valley on Moloka’i’s east end. The first settlement on Moloka’i was founded here, dating back to 650AD. The area is still inhabited, with descendants who still practice traditional farming, hunting and fishing. Anakala Pilipo Solatorio is the last elder born in the Valley and today, he and his son Greg educate visitors about the “real” Hawaiian culture, far from the commercialized versions written for guidebooks.

While others in my group chose a hike to a waterfall, a few of us spend the afternoon with “Uncle” Pilipo and Greg, listening to their stories about growing up in the Valley, living the way their ancestors did. 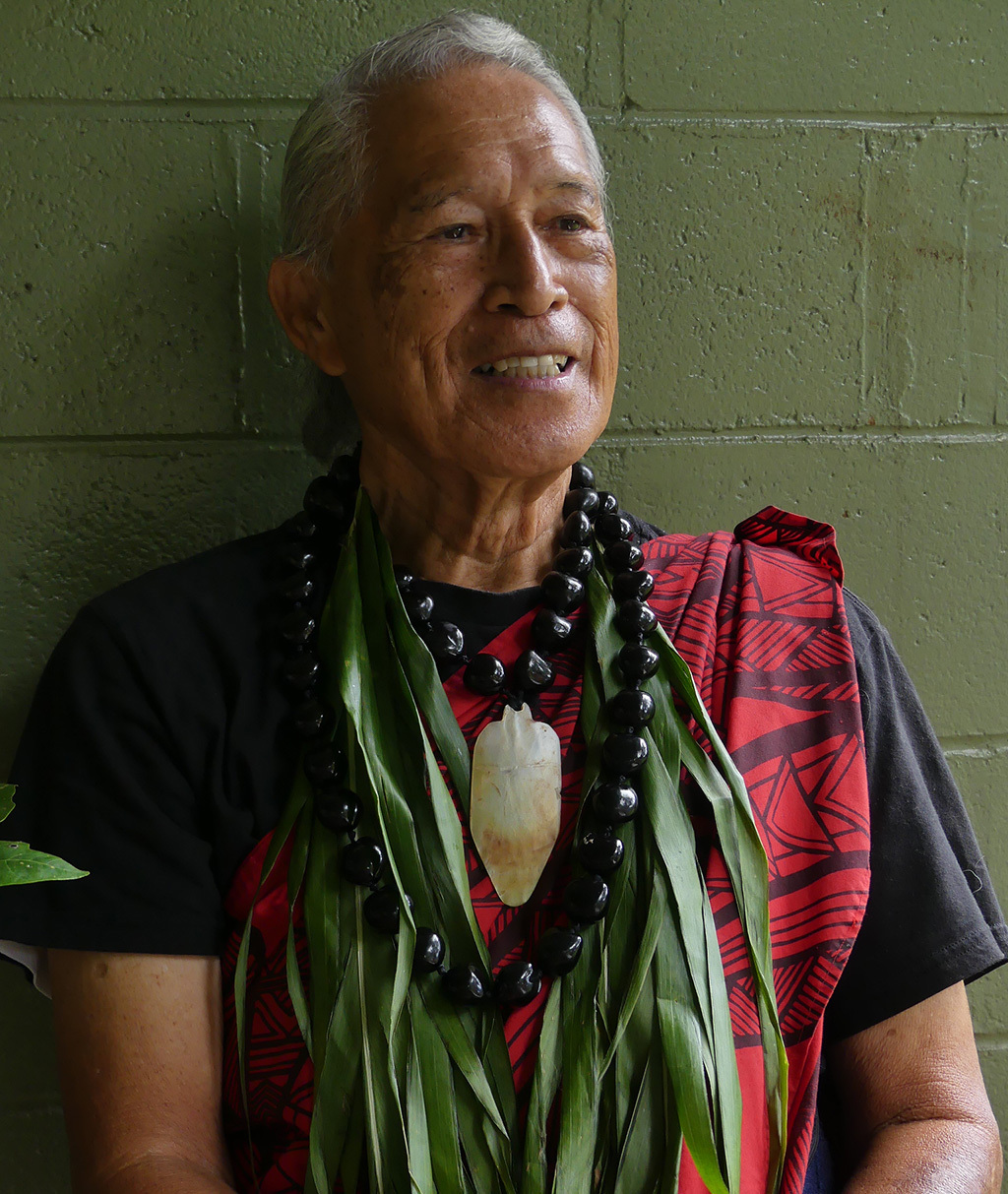 
“So many tourists have been told the romanticized and commercialized version of Hawaiian history and culture, we’re here to teach you the real Aloha spirit,” said Greg.

Those lessons include the proper way to pronounce Moloka’i (Molokaee) and its meaning (churning waters), the intricate nature of the Hawaiian language (which was documented in written form by a German linguist - hence Ws sound like Vs), and the origin of the Hawaiian people - theories that range from Polynesia, Micronesia and even Melanesia.

“Most people dislike poi because they’ve only ever had the processed version, which has been heavily watered down,” Greg tells us as he begins the intensive grinding work, with his father watching over his shoulder. “Authentic poi contains very little water, and is the main staple of our diet.” When it is ready, Uncle Pilipo steps in to take the first taste. After a thumbs up, the poi is placed on a taro leaf and passed around the table. I take a sample with my fingers. Thick and gooey like silly putty, the purple paste is mild, tasteless, and completely inoffensive. But I can see how it might bore the taste buds of those accustomed to eating highly seasoned and processed foods. 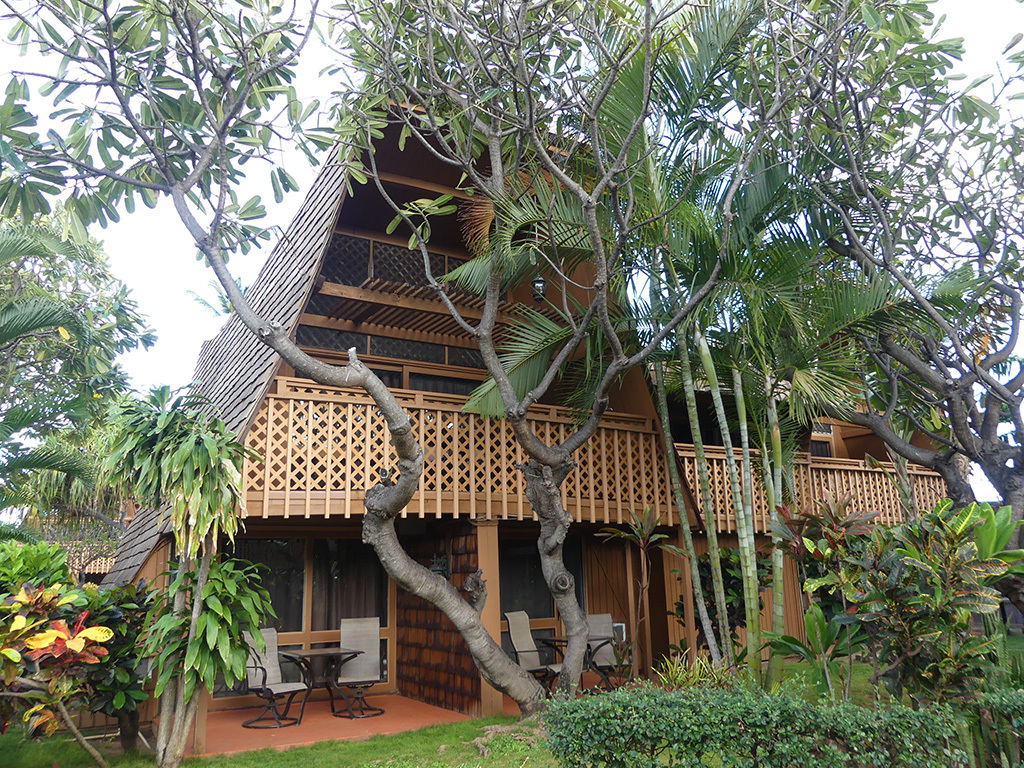 
Later that evening, I attend a pai’na - a dinner gathering that now bears the touristy name of “luau.” The table is laden with chicken, wild boar, deer, seafood, fresh and picked vegetables, and of course, poi. Accompanied by three Hawaiian men playing traditional instruments, two graceful hula dancers work their way amongst our tables while we enjoy this abundant feast.

After four days in Moloka’i, my body and spirit are completely recharged. On my way back to the airport, I pass that “Slow Down” sign again, and make a promise to myself to take that advice home with me.

IF YOU GO: Hawaiian Airlines operate three non-stop flights daily to Moloka’i from Honolulu. Tip: Join their free frequent flyer program and receive discounted bag fees. Hotel Moloka’i is located 15 minutes from the airport and five minutes from Kaunakakai town (by car). Accommodations range from standard to deluxe rooms with kitchenette, garden view and oceanfront. A car rental is a must as the island does not have public transit and taxis are rare. There are two rental car companies at the airport.

Seabourn Announces the Return of Seabourn Sojourn; Entire Fleet Now Back in Service