Travelers may initially be inspired to visit the island of Hawaii for its cerulean waters, verdant rainforests and valleys, and striking black sand beaches, but there is so much more to explore! With an abundance of culture and history to share, the island is full of unique experiences and intriguing facts inspiring first-time and returning visitors. 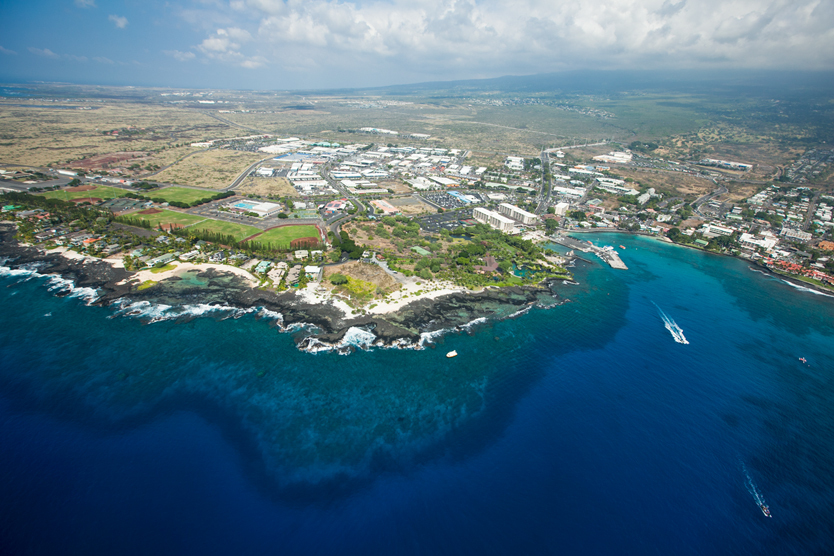 Tidepools outside of Kailua-Kona
Birthplace of King Kamehameha I
The island of Hawaii is believed to be the first island discovered and settled by Polynesians as far back as the fifth century A.D. The island was the birthplace and home of the Hawaiian Islands’ first monarch, King Kamehameha I, who united all of the islands under his rule in 1810. As initial ruler of the Kingdom of Hawaii, he named Kailua-Kona the first capital of the Islands. (Honolulu became Hawaii’s capital in 1850.)
Home to 10 of the World’s 14 Climate Zones
The Hawaiian Islands are home to 10 of the world’s 14 climate zones. Want to know an even cooler fact? The island of Hawaii is the only island in the Hawaiian archipelago where visitors can experience all 10! The largest and youngest island in the Hawaiian chain – just 4,028 square-miles in total and first breaching the ocean surface more than 500,000 years ago – the island of Hawaii is the one of the few places in the world where visitors can experience climates ranging from humid tropical and arid dessert zones to a periglacial zone in a single day.
Cowboy Country 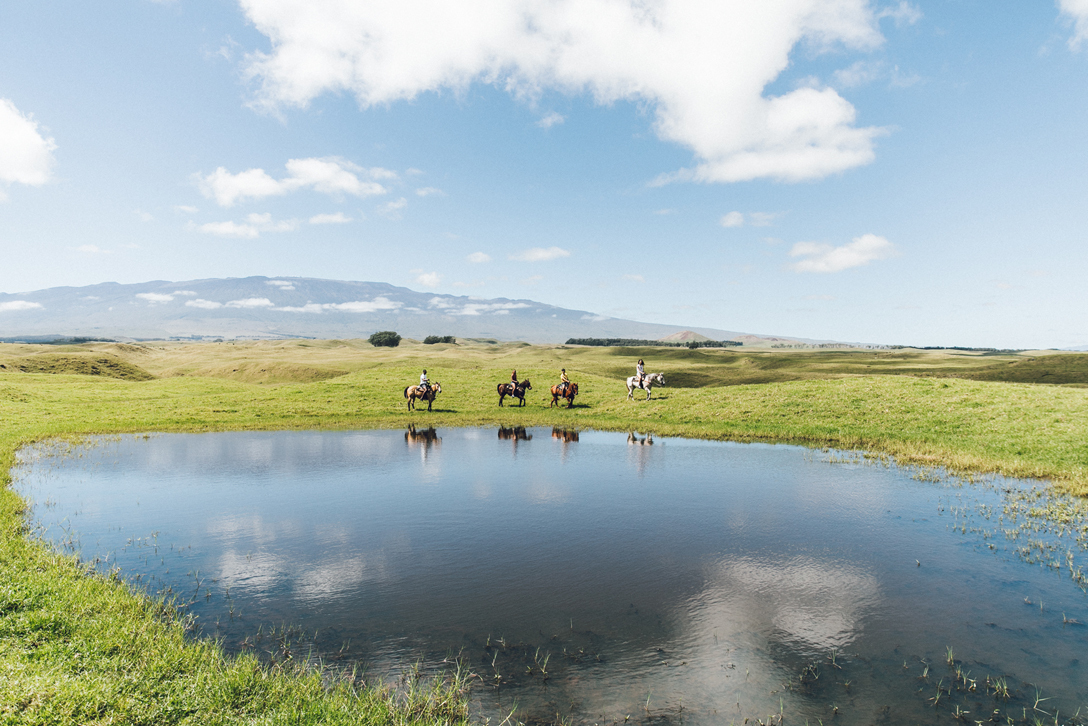 Horseback riding group near a country pond below Maunakea
Situated in a natural land saddle between two – Kohala and Maunakea – of the island’s five mountains, Waimea is a town of breathtaking scenery and diverse landscapes. The history of the still-bustling ranch town is one of cattle ranches, cattle raising and paniolo (Hawaiian cowboys and cowgirls). Spanish-Mexican cowboys (vaqueros) were first brought to the island by Kamehameha III in the 1830s to assist the community in learning how to break in horses for work, as well as rope and corral an overpopulation of cattle. The paniolo born of the vaqueros’ teachings founded the small town’s now deep-rooted paniolo culture. Visitors are invited to explore modern Waimea, its farmers markets, historic Anna Ranch, and the humbly quaint Paniolo Preservation Society office.

The all-new luxury lifestyle resort Mauna Lani, Auberge Resorts Collection is set to debut in January 2020 on the island of Hawaii following a resort-wide reimagination and renovation. The resort will open with contemporary guest rooms and suites, five private bungalow residences, five restaurants and lounges, three distinct pools, and a signature spa and wellness haven, as well as the property’s Kainalu active-pursuits program, Living Culture program and interactive Holoholo Kids Circle, all complemented by Auberge’s intuitive and gracious service.
TOURS AND ACTIVITIES 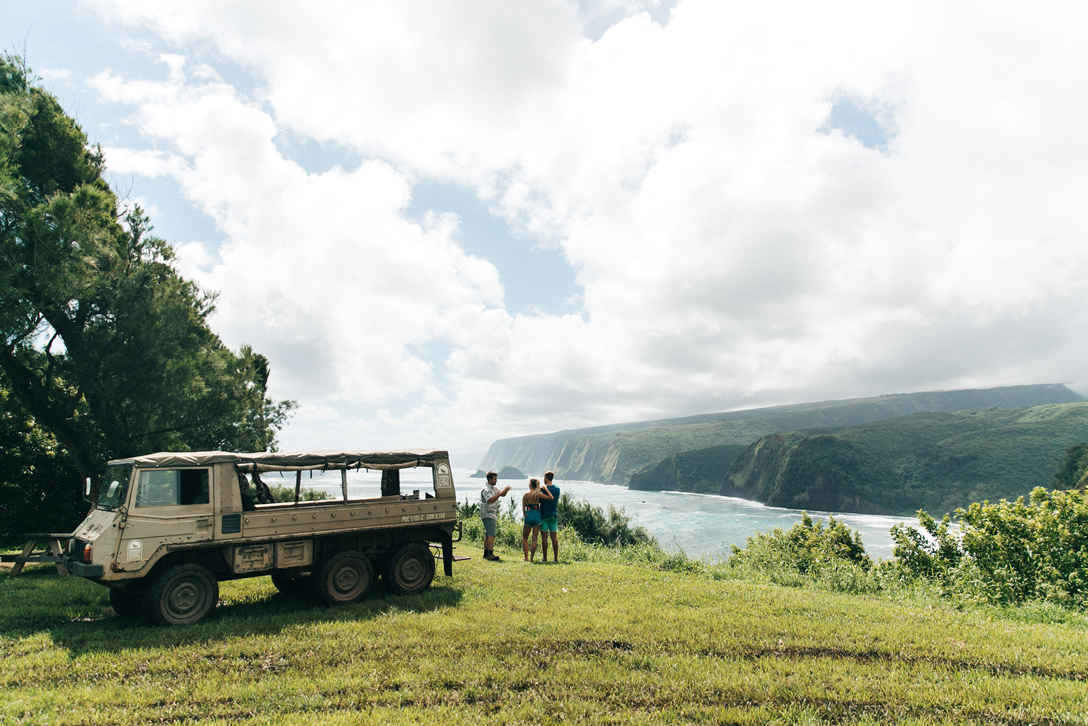 Hiking tour stops by the Pololu Valley Lookout
Destination Residences Hawaii is offering travelers an opportunity to embark on an epicurean adventure only possible on the island of Hawaii. Its Destination Delicacies package allows up to six guests to discover a selection of the island’s delicacies in one day, starting with a private helicopter ride and waterfall landing with a champagne toast. Following the helicopter ride, island tour operator Hawaii Forest & Trail takes guests on a private land tour, which includes stops at Waimea Farmers Market, Honokaa Chocolate Co.’s Kahi Ola Mau Farm, Mauna Kea Tea’s fields, Honopua Farm and dinner at Pueo’s Osteria. 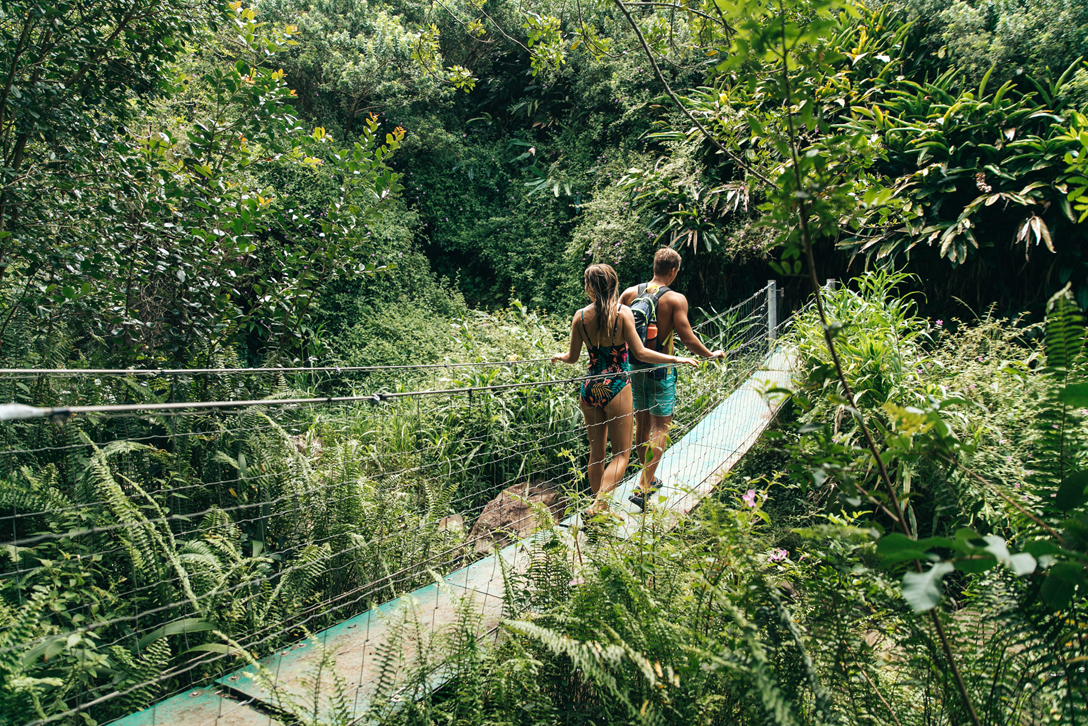 Couple crossing rope bridge on Kohala hiking tour
You can explore the upper slopes of Kona’s very own backyard volcano Hualalai with Hawaii Forest & Trail. Guests venture up the volcano and access private acreage aboard the tour company’s Hidden Craters Hike, trekking native cloud forests with incredible vista views of the Kailua-Kona Coast, standing on the edge of precipitous volcanic craters, and climbing through a segment of a lava tube. After lunch on the mountain, the tour heads back down to Historic Kailua Village for a tour of Kona’s newest brewery Ola Brew, sampling local beers and ciders made with harvested fruits and produce from local farmers. 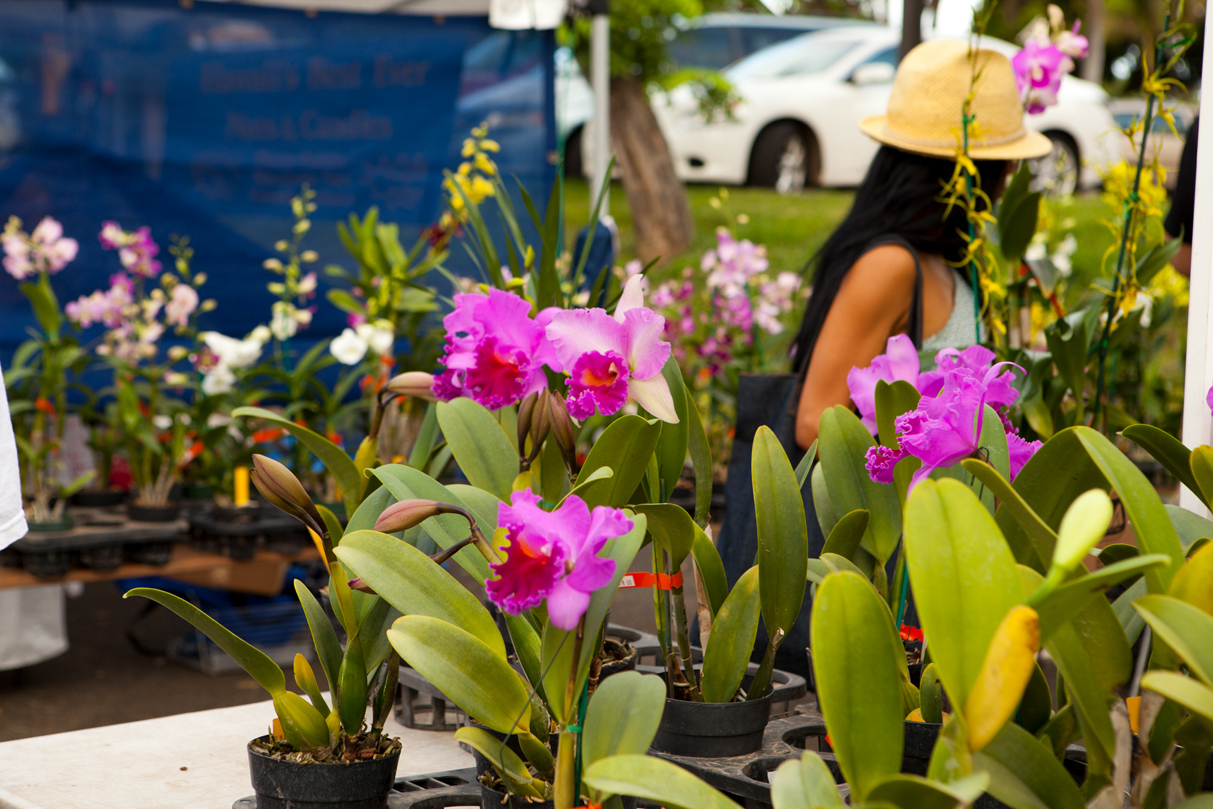 Shopping for flowers at Kapiolani Community College Farmers' Market
The island of Hawaii produces one of the rarest honey varieties in the world: kiawe wood honey, which naturally crystalizes into a creamy white honey with a delicate tropical taste. Fairmont Orchid is home to four beehives populated with more than 80,000 honeybees producing kiawe honey. Guests of the resort can view the beehives on a complimentary Botanical Garden and Bee Tour, every Tuesday from 9:30 -10:30 a.m. The tour includes an in-depth exploration of several tropical plant species, a visit to the beehives and a tour of the chef’s garden, where many of the fruits, vegetables and herbs served at the resort are sourced. 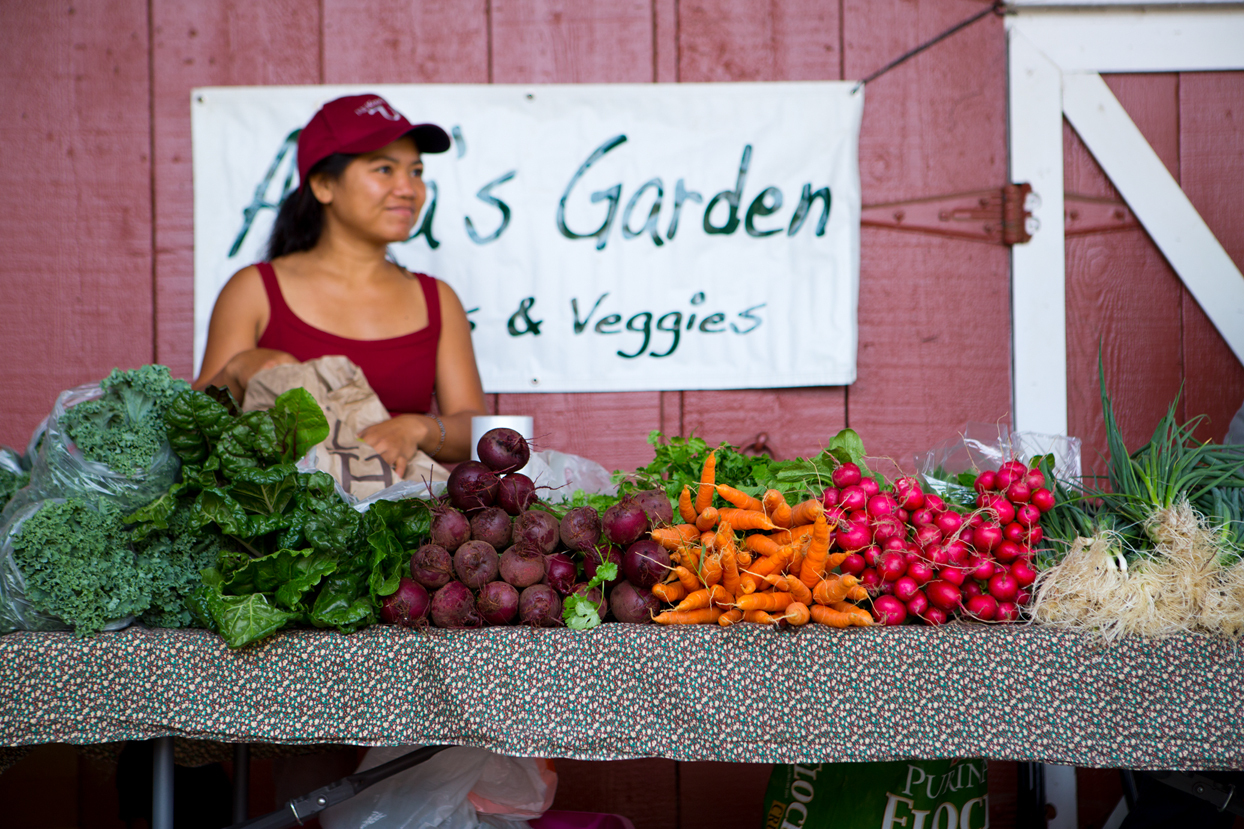 Various fresh, local produce for sale at a farmer's market table
﻿
Hawaiian Legacy Reforestation Initiative (HLRI) is partnering with Jet-Set Offset, an online platform helping raise awareness of the environmental impact of air travel, to offer travelers and businesses the opportunity to offset the carbon footprint of their commercial air travel while also helping reforest the island of Hawaii. Visitors can donate one cent per mile flown, which is the average estimate of the cost to offset carbon emissions from air travel. Each donation will go toward the purchase of Gold Standard-certified carbon credits for offsetting the carbon footprint of traveler flights while they plant endemic Legacy Trees in Hawaii with HLRI.
Kainalu Mauka to Makai Sports is Mauna Lani, Auberge Resorts Collection’s innovative approach to resort activities. It’s a recreation program guided by world-class athletes where resort guests can learn a new language for adventure and embark on immersive journeys of self-discovery. The Kainalu program is inspired by an awareness of one’s ha(breath), the foundation of life and the key to healthy routines. Activities are progression-based and include mainstream and alternative options suitable for all ages. Among these are a heli-bike tour and a night dive with manta rays.

MSC Prepares to Launch its Most Innovative Ship