AS HER NAME ILLUSTRATES, the Prima is the first of six vessels in this class, with a sister launching every year between now and 2027. At 965 feet long and more than 143,535 tons, she has room for 3,100 guests and is stunning in every way.

Where to begin? Her three-storey Penrose Atrium is not only beautiful but also unique, with an asymmetrical design on all three levels, topped with a ceiling of glittering stars. With seating throughout and a featured venue on each level - the Penrose bar on Deck 6, a Starbucks on Deck 7, and the Whiskey Bar on Deck 8 - the atrium is a constant buzz of activity all day and night.

The entire ship is wrapped in miles of glass, offering the best views, whether from the Observation Lounge, the Penrose atrium, the elegant dining rooms, or one’s stateroom balcony. 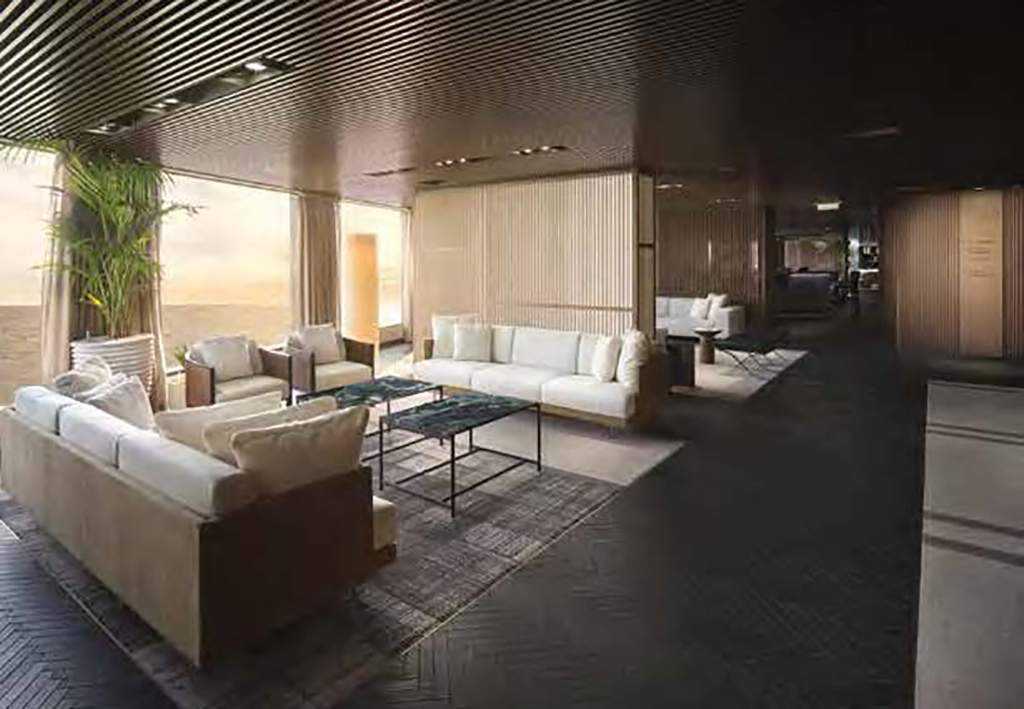 Speaking of staterooms, Prima’s accommodations are spacious and bright, decorated in sandy and light brown tones, and have the roomiest bathrooms we’ve seen. We love the colourful butterfly face mural designed by American artist Amy Rader that replaces traditional framed prints on the wall.

Norwegian was the first to offer a ship-within-a-ship concept with the Haven complex – an enclave of top-end suites with butler service, a private restaurant, bar, and lounge. Onboard the Prima, the Haven is even more exclusive, with all suites located in the ship’s aft, accessible by private elevators. The private bi-level sundeck includes an inviting infinity pool overlooking the aft.

Norwegian never disappoints with dining options, and the Prima boasts 18! In addition to two main dining rooms, the complimentary Local diner, and the Surfside Cafe buffet, there is an array of specialty restaurants. Favourites such as the upscale French Le Bistro, Cagney’s steakhouse, Los Lobos Mexican cantina, and Onda by Scarpetta Italian trattoria are back. New dining venues include the Mediterranean seafood restaurant Palomar, whose signature dish is salt-encrusted whole branzino carved table-side. Elevated Japanese cuisine can be enjoyed at the new Nama sushi restaurant, and the upgraded Hasuki teppanyaki grill is a sell-out on every cruise.

By far, the most popular eatery is the new Indulge Food Hall – a complimentary food-court-style venue serving a variety of meals at lunch and dinner. Individual stations whip up noodle bowls, tapas, salads, Indian curries, barbecue, rotisserie, Mexican, and desserts, each with its own seating section. But diners sitting at larger tables and booths scattered throughout the food hall can order from any venue and have their dishes delivered to their table. Our selections always arrived quickly and piping hot. 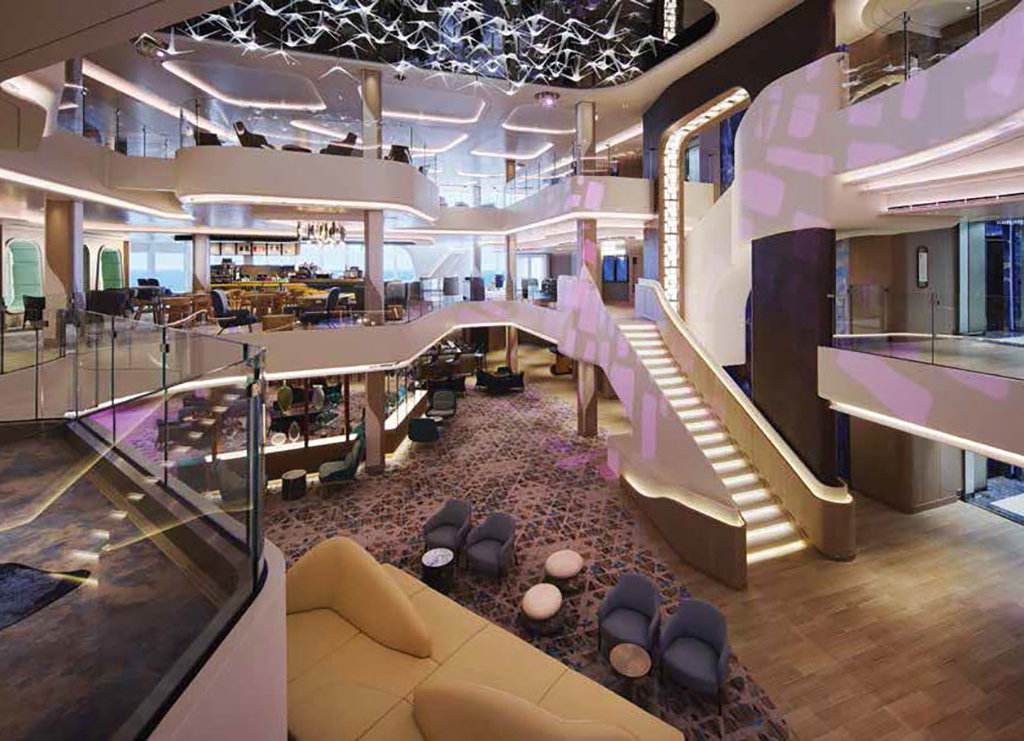 With 17 bars and lounges, Prima ensures her guests won’t go thirsty. Norwegian has launched the first Sail and Sustain beverage program with the new Metropolitan Bar, where zero-waste signature cocktails are produced from items that would have otherwise been discarded. We sampled delicious cocktails created with syrups made from banana peels and imperfect croissants. In addition, the Metropolitan Bar only features liquors produced by companies following the strictest sustainability guidelines.

The Prima continues to impress outdoors with her expansive 44,000-square-foot Ocean Boulevard that wraps entirely around Deck 8. Here you’ll find the outdoor extensions of specialty restaurants, the Local diner, and Indulge Food Hall, a new sculpture garden, plenty of sunbeds, loungers, and hanging hammock chairs. Our favourite space is the new Infinity Beach lounging area on both sides of the ship, each with an ocean-facing infinity pool.

For those looking for a little more action, there are plenty of amusements onboard the Prima to induce an adrenaline rush. How about taking on the 10-storey slide called The Drop – or double the sliding fun by racing a friend to the bottom on The Rush? Go-kart fans will love the enhanced Speedway, now with a longer track on three levels and wide enough for overtaking. The Galaxy Pavilion VR arcade has also been improved with numerous new motion-based rides and two escape rooms.

After the sun goes down, Prima shines on her stages. The headline show onboard is Summer: The Donna Summer Musical. The beautifully curated 85-minute show recounts the dramatic life story of the Disco Diva featuring all of her top hits. Immediately after the performance, the theatre transforms into a disco party for guests to carry on dancing. Another new production is Noise Boys, featuring a rapper, a troupe of energetic tap dancers, and an unbelievable beatbox duo, while The Price is Right Live is an abbreviated version of the popular game show complete with the big wheel spin and a showcase showdown. Other entertainment options include musical acts at various lounges and stand-up comedy at Improv at Sea. 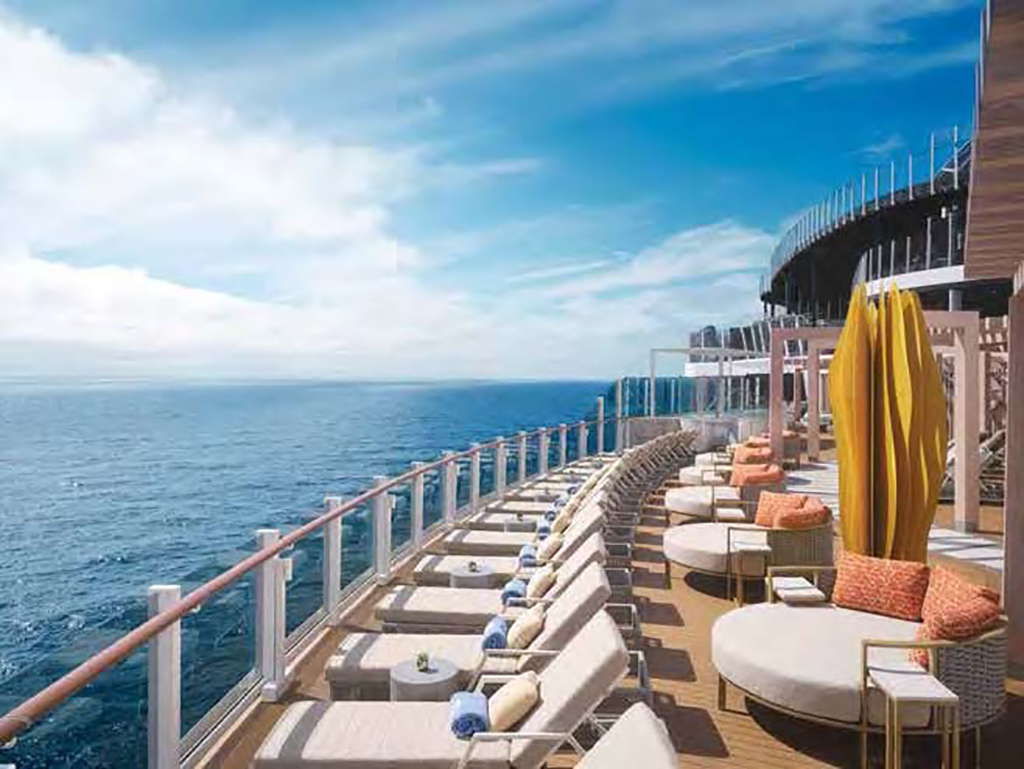 Ever the trailblazer, Norwegian Cruise Line has done it again, with a winning combination of premium amenities, show-stopping entertainment, and elevated culinary experiences onboard the Norwegian Prima. She is a first-in-class winner, and we can’t wait to see what more is to come from Norwegian in the next five years!

Dispatches from the Galapagos