Rocky Mountain High: A Feast for the Eyes and the Soul

During the long months we spent tethered to our homes, unable to travel farther than the grocery store, we longed for escape. Now that restrictions have eased somewhat, it’s time for an immersion in the vast, glorious landscape of western Canada and the rugged Rocky Mountains.

“When I told my parents I was going out west just for the summer,” a long-ago guide told me, “I meant it. But then I saw Lake Louise and fell in love. That was 35 years ago and I’ve been living here ever since.”

It’s not an uncommon experience. The brilliant emerald waters of Lake Louise are mesmerizing, as are the rugged snow-topped mountains that rise behind. The more intrepid amongst us are drawn there for the skiing, others for the hiking, canoeing and camping but after months of quiet confinement, almost any visitor to Lake Louise is bound to be captivated by the sheer beauty of the place.

Follow the winding trails up to the Lake Agnes Tea House, a refuge built for hikers at the beginning of the 20th century. Yes, it’s an uphill trek to get there, but you’ll be rewarded with spectacular views as well as delectable, home-baked treats and a hot cup of tea to enjoy on the terrace. On the way back down, you can congratulate yourself for working off all the calories.

If your budget permits, treat yourself to a stay at the elegant 539-room Chateau Lake Louise, one of the magnificent hotels that once formed the original Canadian Pacific Railway chain. Set in the heart of Banff National Park, the Chateau’s rooms are as luxurious and welcoming as you’d expect, but what really makes the experience special is the unparalleled access it offers guests to the lake and the mountains. Book a horseback riding tour to explore the trails, do a yoga class by the emerald water, or ride the Lake Louise summer gondola. If you make your visit a wintry one, ski some of the best slopes in the world, bundle up for a horse-drawn sleigh ride or skate across the lake. Make every moment a memory. 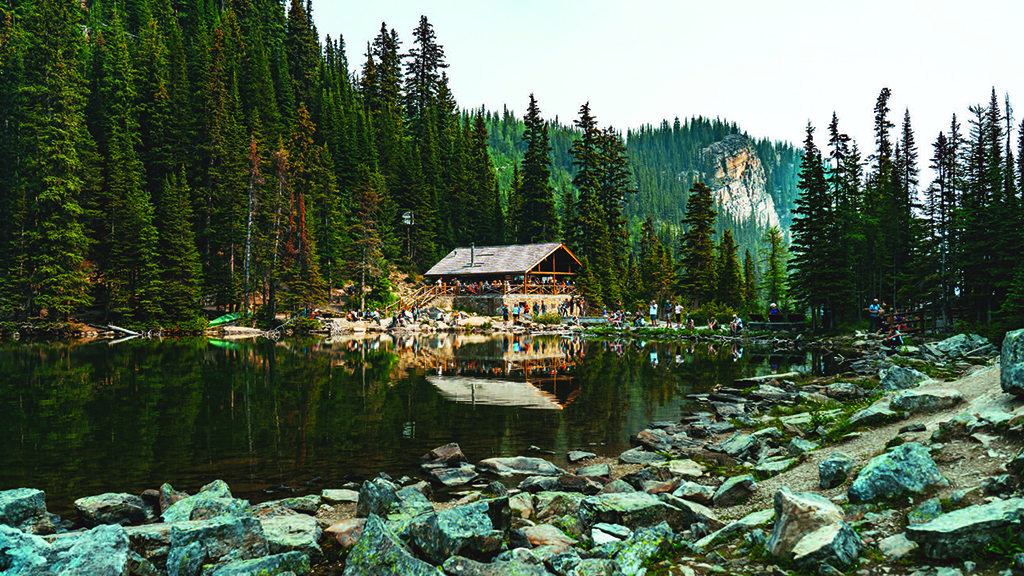 While the 14 km hike from Lake Louise to Moraine Lake will raise your heart rate, it’s the sight of the shimmering water that will truly lift your soul. Like a jewel encased in an enormous circlet of dark green pine trees, waterfalls and rock faces, Moraine Lake lies in the Valley of the Ten Peaks at an elevation of more than 1,885 metres. Its aquamarine waters are famous around the world – largely because the vivid colour seems unreal. How can a lake in the middle of the Canadian west look so brilliantly tropical? The answer lies in a combination of light, water and flour. Rock flour.

Moraine Lake is fed by glaciers that scrape off minute shavings of rock as they melt. Those tiny particles hang in the water and when they refract the sunlight, the result is the gorgeous shade every photographer tries to capture. If you’re eager for the most vibrant hue, come in late June when the water levels are at their peak. Plan to stay for the day, because, as the sun moves across the sky, you’ll see subtle but stunning changes in the colour of the lake. 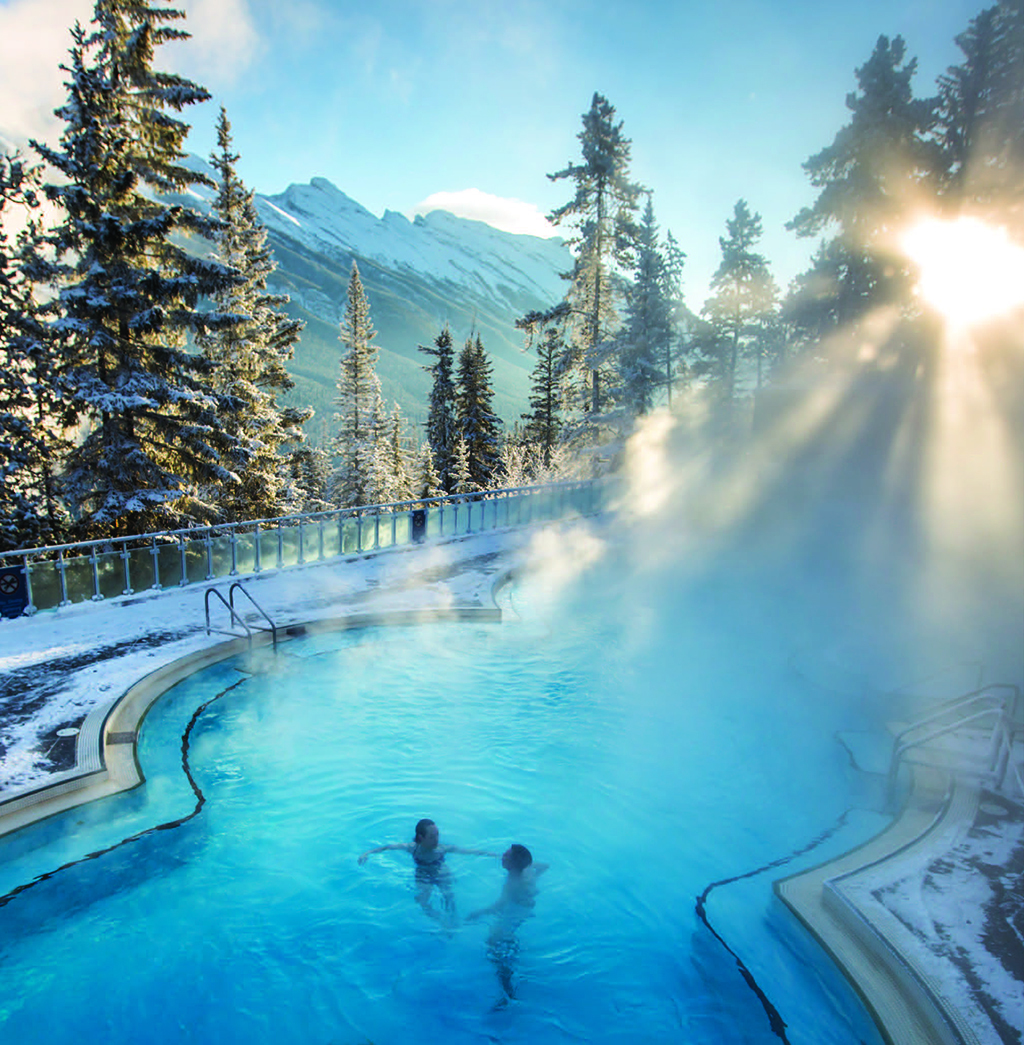 No trip to the Rockies is complete without a visit to the world-famous Banff Upper Hot Springs, in Banff National Park. There you can soak in warm, healing waters first discovered by local Indigenous people who considered them sacred. Those waters inspired the building of an elegant spa that opened on July 1, 1932 and featured plunge baths, steam rooms, tubs, showers, dressing rooms and of course, a sulphur water swimming pool. Guests from around the world soon began to ride the rails to visit the famous Upper Hot Springs bathhouse, a facility reminiscent of the greatest spas in Europe.

Though still one of the most popular tourist attractions in the area, Banff Upper Hot Springs carefully controls the number of visitors to prevent crowding and the experience remains tranquil. The steam rising off the sulfur-rich 38-40 degree C waters creates a sense of peace as does the view of the snow-capped mountains surrounding the site. It’s bliss. Plan a visit to the Upper Hot Springs to steep not simply your sore muscles but also your pandemic-weary soul.

If you’re like most of us, it’s probably been a very long time since you’ve been completely in the dark. Normally, when the sun goes down, indoor lights click on, headlights and streetlights illuminate the outdoors and cell phones glow. We live with constant light pollution of which we’re largely unaware. And that’s what makes a night in the Jasper Dark Sky preserve so remarkable.

The Royal Astronomical Society of Canada defines a Dark Sky Preserve as “an area in which no artificial lighting is visible,” and while Jasper is not the largest in Canada (Wood Buffalo National Park holds that distinction) it is one of the biggest in the world. 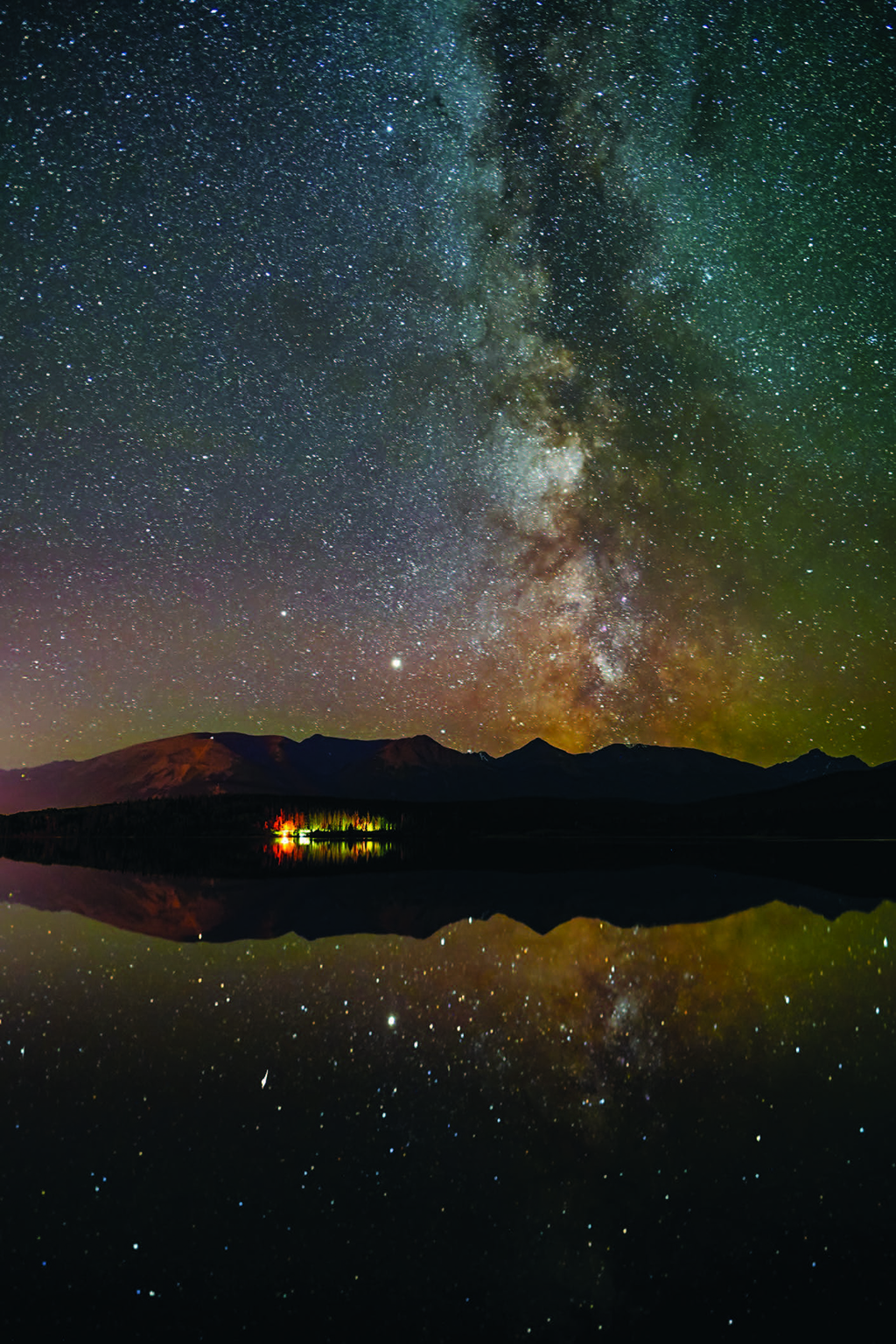 Depending on the depth of your pockets, you can stay at the Jasper Park Lodge – a venerable and welcoming log cabin-style hotel with a storied history of welcoming the world’s great leaders and celebrities – or you might choose to camp in a well-equipped oTENTik (like a cross between a tent and a cabin) in Jasper National Park. Either choice will put you close to the Dark Sky Preserve. Settle in early to stare up at the sky as the last pink tendrils of the sunset fade. Turn off all your electronic devices and feel yourself relaxing as the tiny stars began to pierce the night sky. Watch for the Aurora Borealis which often appears but if not, simply sink into the blackness. In Jasper’s Dark Sky Preserve, when the sun sets, the darkness is complete – so thick and so all-encompassing it envelopes you like a blanket.

Sometimes, soothing your soul is more about what you’re not seeing, than what’s actually in sight.