I WAS BACK IN THE COUNTRYSIDE that has given me some of the happiest travels of my life. For my husband, it was a first, and I hoped he would share my feelings.

Of the various Italian regions that I’ve visited – and loved – Tuscany captivates me like no other. It appeals to all the senses – rich with history, art and architecture, while its fertile hills and valleys, like its wine and food, are meant to be savoured.

This 23,000 sq km heart of Italy is dotted with hillside vineyards and terraced olive groves. They thrive amidst postcard-perfect villages and ancient hill towns with perfectly preserved villas, churches and galleries brimming with celebrated works of art.

Our first stop after landing at the Florence airport was to pick up the compact car we had reserved. “I give you luxury upgrade,” the agent whispered with a sly wink, as if he was doing us a covert favour. An Alfa Romeo maybe? Even a Ferrari? It was an appealing thought until we realized his idea of a luxury upgrade was a North American whopper of an SUV that couldn’t be squeezed into the compact-sized parking spaces that line town streets and parking lots. Lesson learned for the next visit.

With just a week to travel, we decided to limit our exploration between Greve in Chianti in the north, and Montepulciano in the south, staying first in a miniscule apartment within an ancient villa and then, at a chic winery guest house. Our goal was to eat – not at Michelin-starred establishments, but at little restaurants, with home-cooked dishes and local wines on the menu. Wines here are named by region, rather than by grape, the three best known being Montalcino, Montepulciano and Chianti. 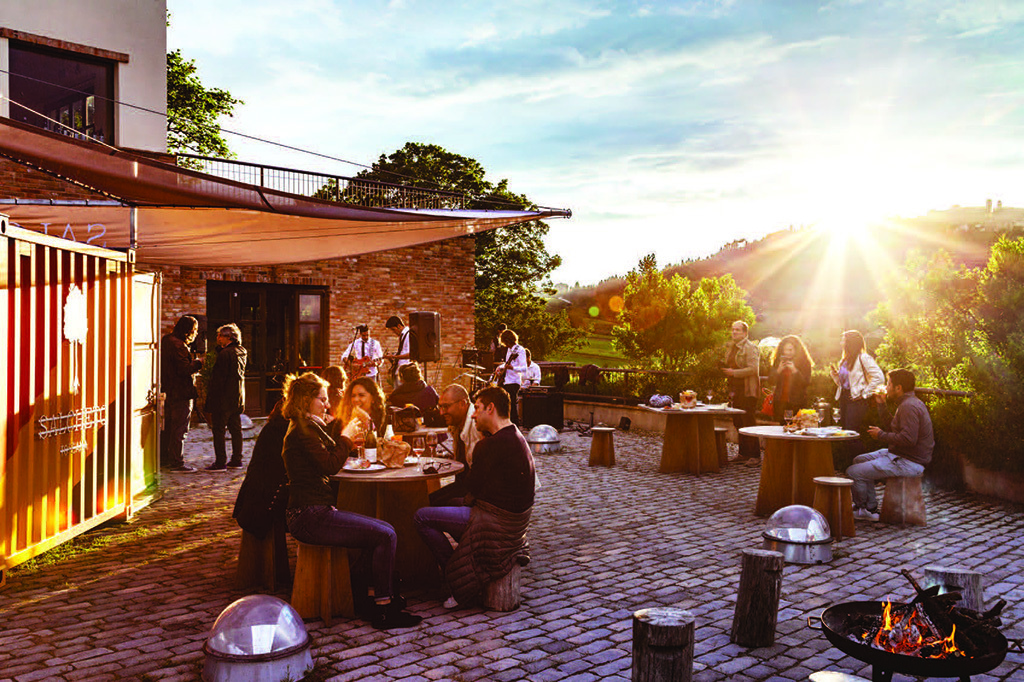 We shifted effortlessly into the ritual of Tuscan life. Breakfast is not a big deal, and it usually meant a stroll to the café around the corner for cappuccino and a pastry. Lunch, however, is a major event. After a morning foray through the countryside or touring an ancient town, we would find a little trattoria, preferably with a patio, for a leisurely three-course meal. Lingering over a glass of wine, we would people-watch, while savouring the rhythm of a life that seemed so civilized. Village markets provided everything we needed for a simple evening meal at ‘home.’

Ice cream shops, as omnipresent as Tim Hortons in Canada, meant gelato time could be any time. In our search for the best place to indulge in homemade Italian ice cream, we sampled repeatedly and shamelessly, discovering gelato nirvana at Gelateria Dondoli, in the piazza of San Gimignano. Flavours such as Rosemary’s Baby (raspberry and rosemary), Champelmo (sparkling wine and pink grapefruit) and Venere Nere (blackberry and lavender) made it well worth the 12-minute line-up. This 13th-century, walled city is such a popular destination that we had to arrive early in the day or late in the afternoon to find a place to park the Whopper.

On a Saturday, Greve in Chianti is the place to be. Piazza Matteotti, the town square, which is actually triangular in shape, comes to life by 8am. Market day brings a profusion of vendors selling everything from fresh produce, cheese, olives, flowers, housewares, to fashions and leather goods worth a second glance. The deep arcades surrounding the piazza are populated with boutiques, artisans’ workshops, cafés and a world-renowned butcher shop. It wasn’t hard to spot Antica Macelleria, the butchery, since a stuffed wild boar stood guard outside. Pungent aromas lured us into this carnivores’ utopia, run by brothers Lorenzo and Stefano, the eighth generation of butchers in the Falorni family. For four days each September, Greve, hosts the Chianti Classico Wine Festival which we unfortunately missed by a week. 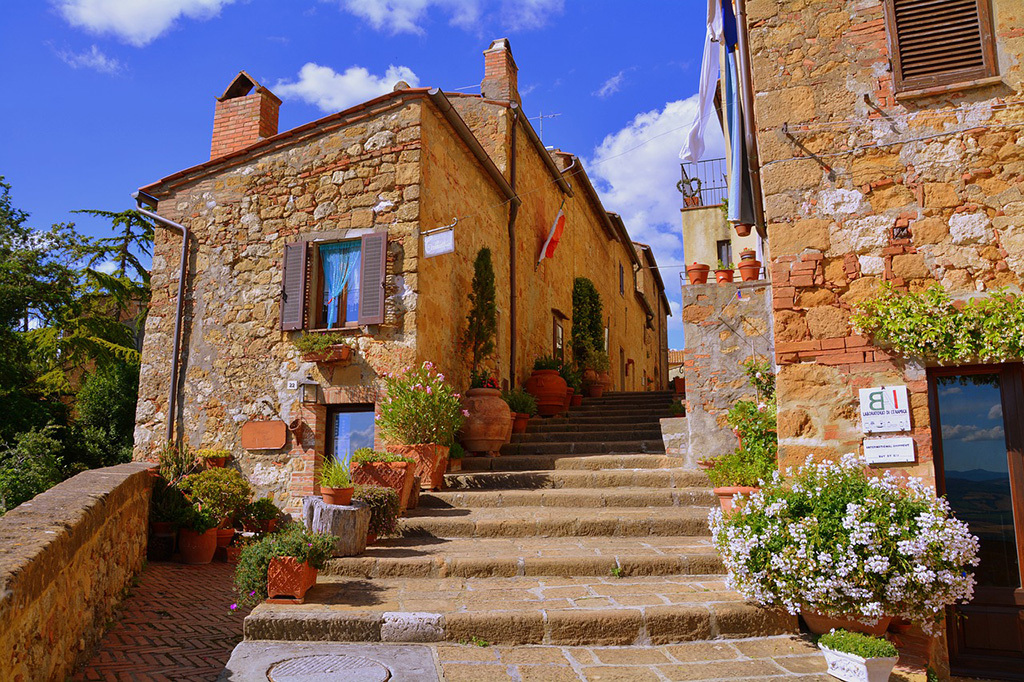 We headed south to the village of Montalcino whose main claim to fame is the dark, pungent red wine, Brunello di Montalcino. Our preferred route followed two-lane roads that took us past green pastures and golden fields of sunflowers, and beside ancient farm homes and cypress-lined lanes leading to tile-roofed villas. The fortified town, perched atop a hill, offered sweeping views of some of the greatest vineyards in the world. The wines, available for tasting at enotecas and trattorias along the main street, were rich and superb.

Pienza, 20 kms east of Montalcino, has always been one of my favourite towns. “The streets are paved with pecorino cheese,” I told my husband, as we parked outside the stone walls.

In 1459, Pope Pius II undertook to transform his sleepy little hometown into an idyllic Renaissance centre. It is one of the few remaining Renaissance towns in the county, obtaining UNESCO World Heritage designation in 1996. If you weren’t seduced to stop at the stunning cathedral, papal palace and the shops, you could stroll from one end of Corso Rosselino, the main drag, to the other in five minutes.

And then there’s the cheese. Pienza is awash in pecorino — the aromas waft in the air from myriad shops. This is the capital of Italy’s famous sheep-milk cheese. Credit for the flavoursome and aromatic milk goes to the unique pastures where the sheep graze.

At the end of the cobblestone street, Trattoria Latte di Luna has been a favourite eaterie since my first visit. Family-owned and friendly, the simple food relies on the excellence of local ingredients. Maialino arrosto (roast suckling pig) and hand-rolled pici pasta are the house specialties. 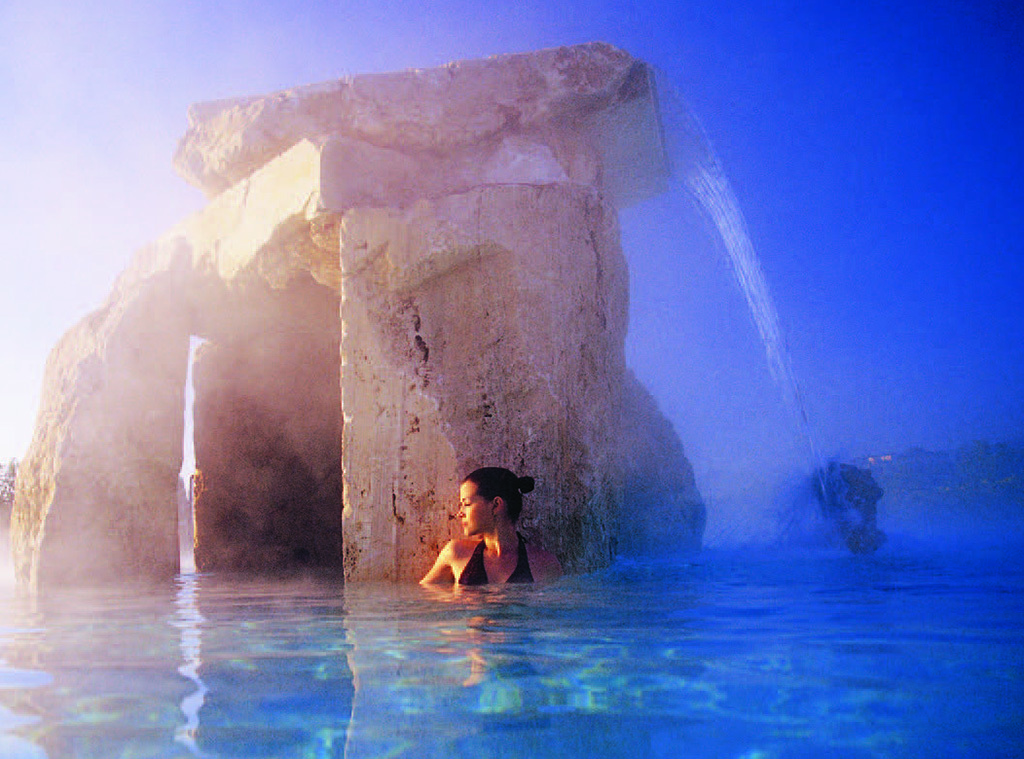 Learning that Lorenzo the Magnificent had, in the 15th century, soothed his ailments in the steamy, sulphur pools and that some of the best thermal spas are located in Tuscany’s southern province of Siena, we visited Adler Spa Resort Thermae. Luxuriating in an outdoor pool, fed by a warm mineral spring, proved to be another way to enjoy the Tuscan sun.

We spent the final three days at Salcheto Winehouse — the stylishly simple guest house set in the Salcheto vineyards. Nestled into a hillside at the end of a country road, the winery has a million-euro view up to Montepulciano, the walled city that perches like a crown on a nearby hill. Salcheto is one of the finest vineyards in the area, producing award-winners annually. We arrived in the midst of the frenzied excitement of harvest. Owner/winemaker Michele Manelli shared with us the biodynamic and sustainability practices for which he has become famous and why he purchased this property 20 years ago. “I had never seen such a beautiful location,” he said. “I was touched by what I like to call the floating of the area over time and space. You can never define it – you cannot say it is today or in the middle of the Renaissance, or we are in the countryside or the middle of the world. It is rich because it has been preserved in an incredible way.”

On our last afternoon under the Tuscan sun, with a gentle breeze blowing across the Salcheto terrazzo, as we sipped a glass of Vino Nobile de Montepulciano, my husband asked, “So…do you think we’ve died and gone to heaven?”