WHAT WE REALLY NEED HERE, I am thinking, is a good, old-fashioned murder. I am lounging in a shaded area on the Sanctuary Sunboat III sundeck, a cold Sakara Gold in hand, and my favourite Agatha Christie mystery open on my lap. While contemplating Death on the Nile, I watch life on the river drift past. Old men fish from diminutive skiffs using two-by-fours as oars, hawkers paddle alongside our vessel to flog colourful gallabiyahs and embroidered kaftans, while along the shore, young shepherds trot by on donkeys, herding cattle and goats. Weary camels shelter in the soft shade of palms and women scrub clothes, while children splash in the shallows, stopping their play to wave. The Nile is not in a hurry – there is beauty and delicious calm in a scene that seems unchanged over thousands of years. As dusk settles, haunting calls to prayers echo over the water.

Before Christie’s characters board their fateful cruise in her famous mystery, they kick things off at the Old Cataract Hotel in Aswan. Our small group of 24 gathered for our Nile adventure at the Marriott Mena House on the edge of the expansive city of Cairo. As a backdrop on the dusty Giza plateau, the pyramids of Khufu, Khafre, and Menkaure, Egypt’s monuments to eternity, rise above the desert sands. 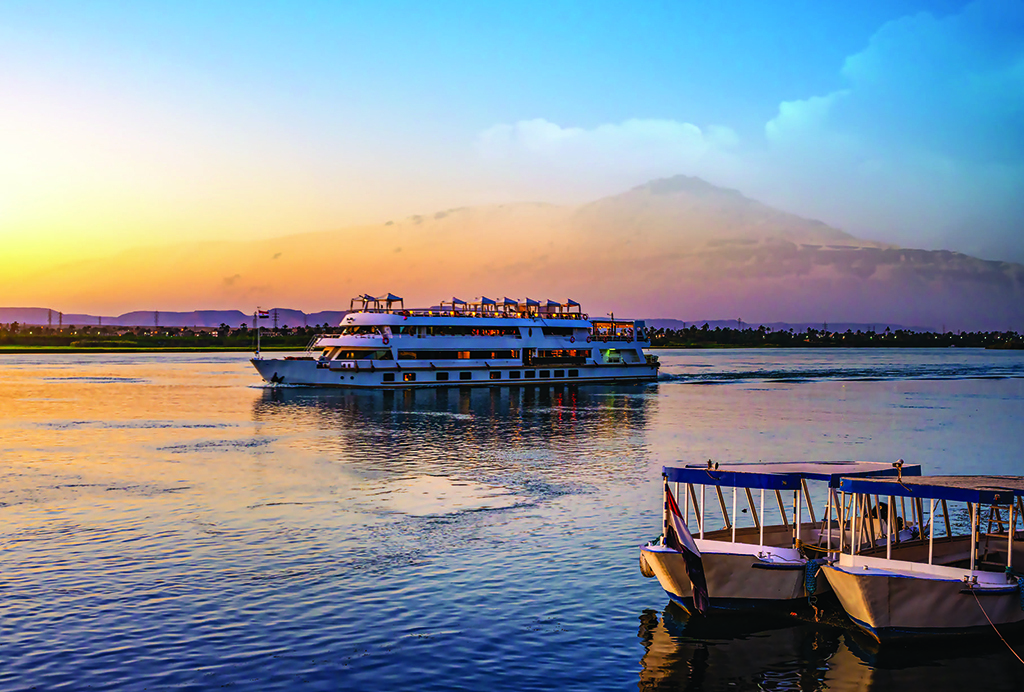 My 12-day Egyptian journey with Scenic Luxury Cruises and Tours will take me from Cairo, with its pyramids, Sphynx, Islamic mosques and the fascinating Egyptian Museum, to the vibrant city of Luxor. Once known as Thebes, this ancient city was the capital of Egypt and remains a striking testimony to Egyptian civilization at its height. We visit the awe-inspiring temples of Karnak and Luxor, and then take a ferryboat across the Nile to explore the Temple of the Egyptian Queen Hatshepsut beneath the cliffs of Deir el Bahri and the necropolises in the Valley of the Kings.

From Luxor I booked passage for the 228-kilometre trip south to Aswan, not on Christie’s fictional paddle-wheeler Karnak, but Scenic’s graceful Sanctuary Sunboat III. In 47 BC, Julius Caesar sailed up the Nile with his love Cleopatra and the journey has been favoured by the curious and romantic ever since. The sundeck on our 197-foot boutique cruiser is known as “Cleopatra’s Oasis,” with its sculpted swimming pool, tented sanctuaries and Sahara lounge. Though my suite is comfortable and elegant, with its four-poster canopied bed and river view, it is to this upper oasis that I am drawn.

As the lines are released and we slip into the current, white egrets lift off from the bank, an elegant dahabiya ploughs downstream and colourful, single-sailed feluccas flit about like butterflies. I take in my shipmates – an international group from Australia, the U.S. and Canada. Perhaps they are not sinister or furtive enough for my liking, but the group size will make it easier to snoop out a murderer. 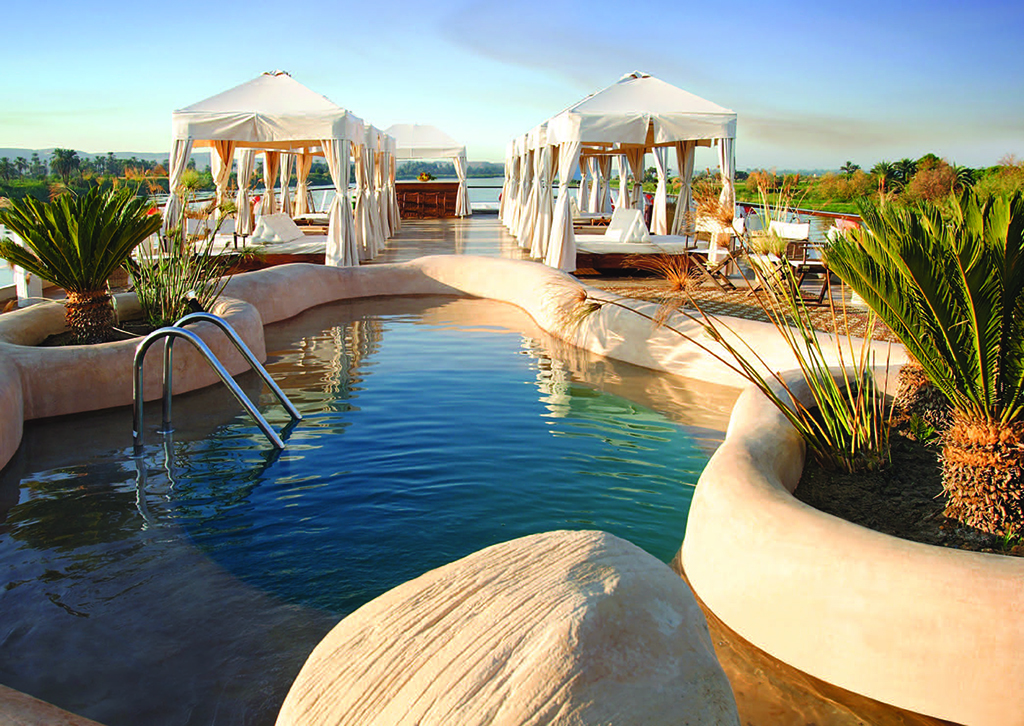 Our intimate ship was launched in 1993 and fully renovated in 2006, modelled on the opulent era of the 1930s. It boasts exquisite facilities; style, comfort and refinement are reflected throughout. The polished wood of the reception, bar and restaurant is calmed by pastel awnings and plush cushions. The decor offers quiet, understated charm and an understanding of place. The shallow-drafted vessel is able to reach places which larger ships cannot.

The nostalgic atmosphere on board does not disappoint, nor does the cuisine. Three times a day spectacular dishes are brought up from the kitchen; a mixture of local delicacies and international fare, with friendly waiters competing to carry plates to the table.

Evening entertainment includes a colourful ‘gallabiyah party’ which allows guests the opportunity to dress up in traditional Egyptian clothing and dance to Arabic music – the perfect night for a crime, I’m thinking. There is also a whirling Dervish show, a cooking demonstration and illuminating lectures by the tour Egyptologist.

Nile cruises have long offered the best way to visit Egypt’s temples and villages. We dock at a bend in the river and take a short excursion through the village’s noisy, chaotic marketplace to the Temple of Kom Ombo, which commemorates two gods – the falcon-headed Horus the sky god and Sobek the crocodile god. Most temples still have intact hieroglyphics adorning their walls and deciphering their story provides a fascinating insight into ancient Egypt. 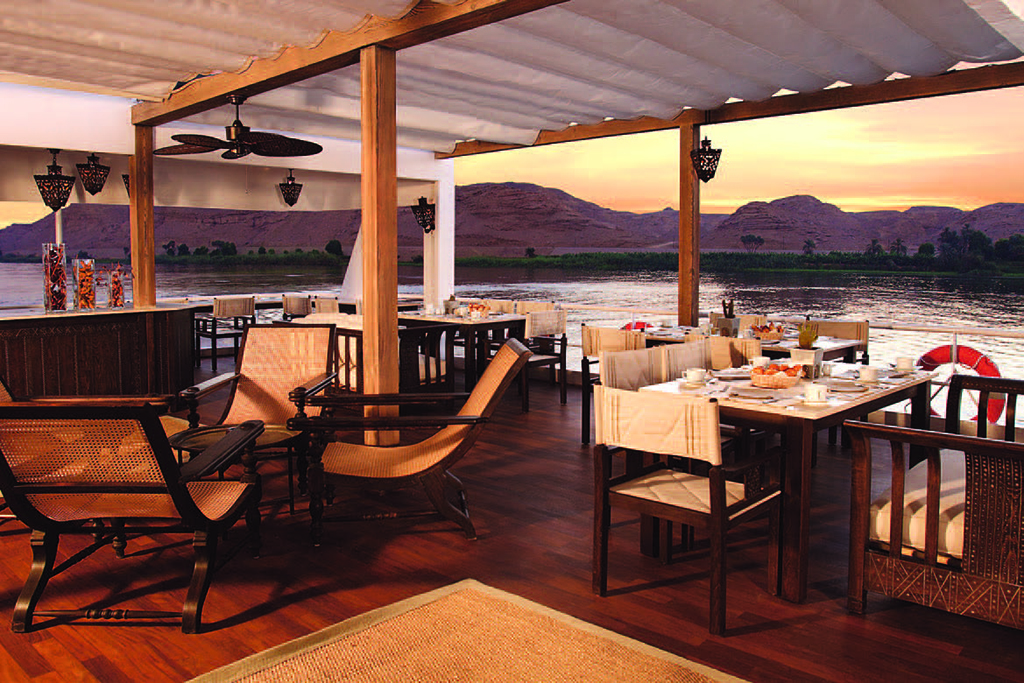 Our four-night cruise ends in Aswan. Standing proudly on the river’s edge, the Old Cataract Hotel is as much an Aswan landmark as the city’s ancient remains. Built in 1899, and since updated with luxurious amenities while maintaining its sophisticated glamour, the hotel conjures up the golden age of travel, of wealthy guests and colonial administrators sipping cocktails on the terrace at sunset. It is a beautiful view across to Elephantine Island where feluccas and motor launches crowd the narrow passages of the Nile.

Agatha Christie stayed here after completing her own river cruise, and in her top-floor suite wrote Death on the Nile. In the story Hercule Poirot remarks on the view: “It enchants me. The black rocks of Elephantine, and the sun, and the little boats on the river. Yes, it is good to be alive.” I tour Christie’s suite and then cool off from the heat in the pool overlooking the river. In the evening I join the group for dinner at 1902, the hotel’s stylish and opulent restaurant and find myself enchanted in much the same way as the great detective. 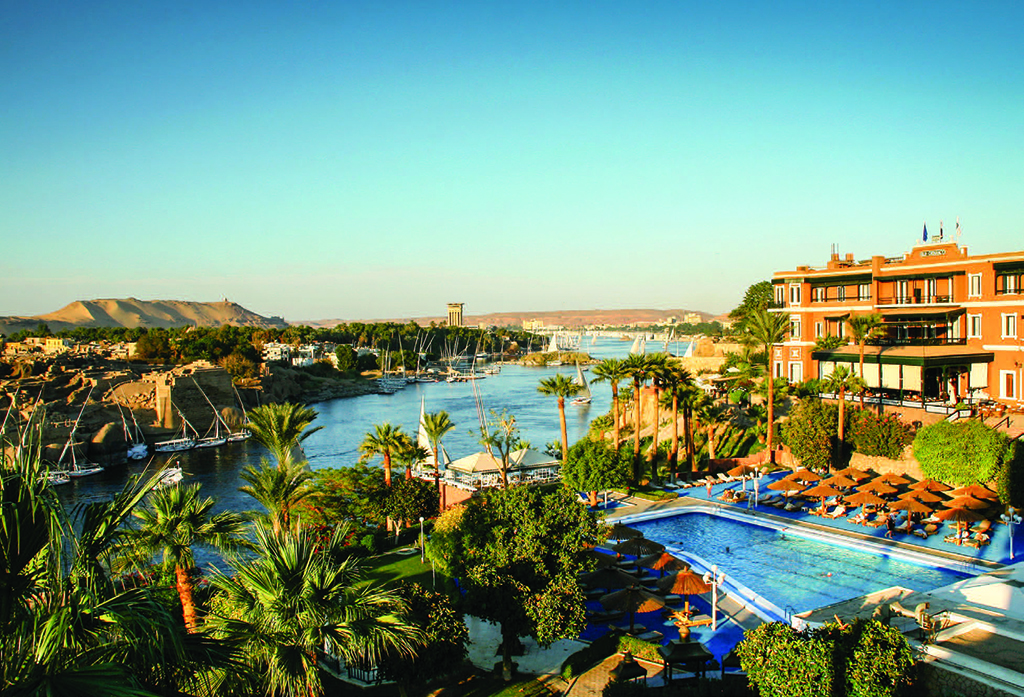 Our last stop 300 kms south of Aswan is Abu Simbel, where the iconic temples of Ramesses II and his queen Nefertari were carved into the mountain. When the Aswan High dam was constructed in the 1960s and Lake Nasser created, UNESCO rushed to save the temple, painstakingly disassembling the structure and moving it to higher ground. Though we take a short flight to reach the temple, on Poirot’s Karnak cruise in 1937, Abu Simbel was a stop on the banks of the Nile. In Christie’s story, a stone from the temple is sent tumbling down as part of a murder attempt but nothing so exciting happens to us. This grand monument – even minus the rolling stone – is well worth the visit.

Egypt not only capitalizes on its mythology and history; it revels in them. The old and new live side by side and depend on each other. In uncovering and understanding the afterlife, death on the Nile is a daily part of our own Egyptian journey. This mystery and romance is what made the Nile an ideal setting for Agatha Christie’s story, and for my own delightful tour – where all that was missing was the customary corpse.

Written by Jamie Ross for Cruise and Travel Lifestyles (Summer 2021)