Lured by endless palate-pleasing whiskeys and irresistible Scottish charm, travellers to Edinburgh, Glasgow and Dundee will uncover a wealth of history, art, architecture and culture.

AS I CROSS EDINBURGH’S North Bridge, the literal connection between the Old and New Towns, people-watching is irresistible. University students with sketchbooks are on their way to find inspiration at the National Gallery, groups of stylish men are discussing the day’s business while streams of camera-toting tourists and quick-moving pedestrians are weaving between the morning traffic. As the modern inhabitants of Edinburgh pursue their daily schedules, I’m focused on going back in time.

The Scott Monument stands tall next to the New Town’s Georgian architecture. Built to honour Scottish poet, playwright and novelist Sir Walter Scott, the gothic sculpture has been a lodestone for visitors starting their exploration of the city since the Victorian era.

As I’m standing at the Waverly Mall overlooking the monument, I notice a circle of brightly-colored plaid folding chairs set up for the perfect view. As I get closer, I notice signs encouraging anyone to ‘Sit Yer Bahookie Doon’ (aka sit down). The local vernacular elicits many smiles, a few laughs and several people taking selfies with the chairs, as well as impromptu conversations between visitors and locals. 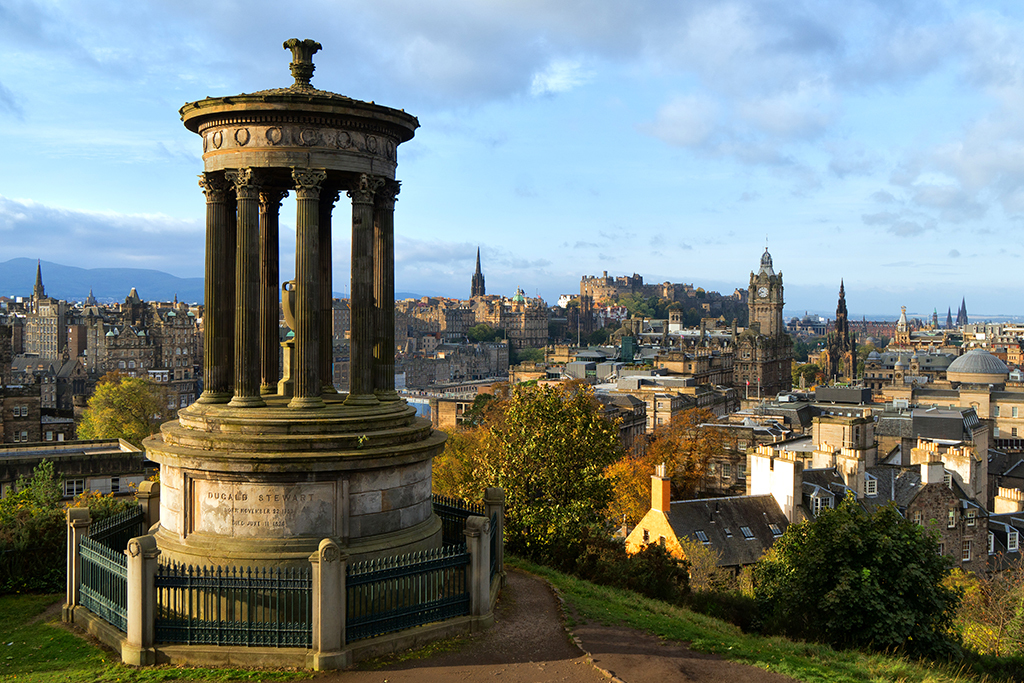 I walk through the quiet of the Princes Street Gardens as I make my way to the city’s main attraction. A steep path leads to the grand Edinburgh Castle, standing since the 12th century. I’m drawn back in time, picturing squinty-eyed soldiers keeping watch from the stone parapets as the members of the Royal Court were on display in the grand reception rooms. Two million visitors a year tour the castle, and many are like me, wishing they could reenact dreams of dressing like a Scottish lord or lady to walk the palace grounds and cobblestones of the Royal Mile, past medieval and Reformation-style buildings to Holyrood Palace, the official British Royal residence, once home to Mary, Queen of Scots.

Nearby Victoria Street, a curved collection of historic stone and brightly-coloured shop facades was the inspiration to J.K. Rowling for Diagon Alley when writing her beloved Harry Potter series. I’m now seeing the Old Town through a writer’s eyes: alleys with colourful street art, hidden courtyard gardens and modern boutiques found within buildings dating from medieval times to the 17th century. I’m conjuring up images of wizards hiding among us. This UNESCO World Heritage site is a vibrant living museum, the Old Town’s layers of history a welcome way to learn about Edinburgh’s past and a distinctive setting for the city’s popular summer festival season of theatre, music, dance and literature.

I toast my visual history lesson with a visit to The Scottish Whisky Experience, each sip transporting me through Scottish history, and satisfying my desire to learn about Edinburgh’s rich past.

THE LIGHTHOUSE, a seven-storey museum and exhibition space dedicated to art, architecture and design, is one of many places to learn about Glaswegian architect/designer Charles Rennie Mackintosh. Glasgow is fiercely proud of The Glasgow School – a group of artists and designers led by Mackintosh – and of the lasting influences of their works on the city. The museum’s Mackintosh Centre exhibits several examples of his design from chairs to stained glass that would be welcome in any home today. 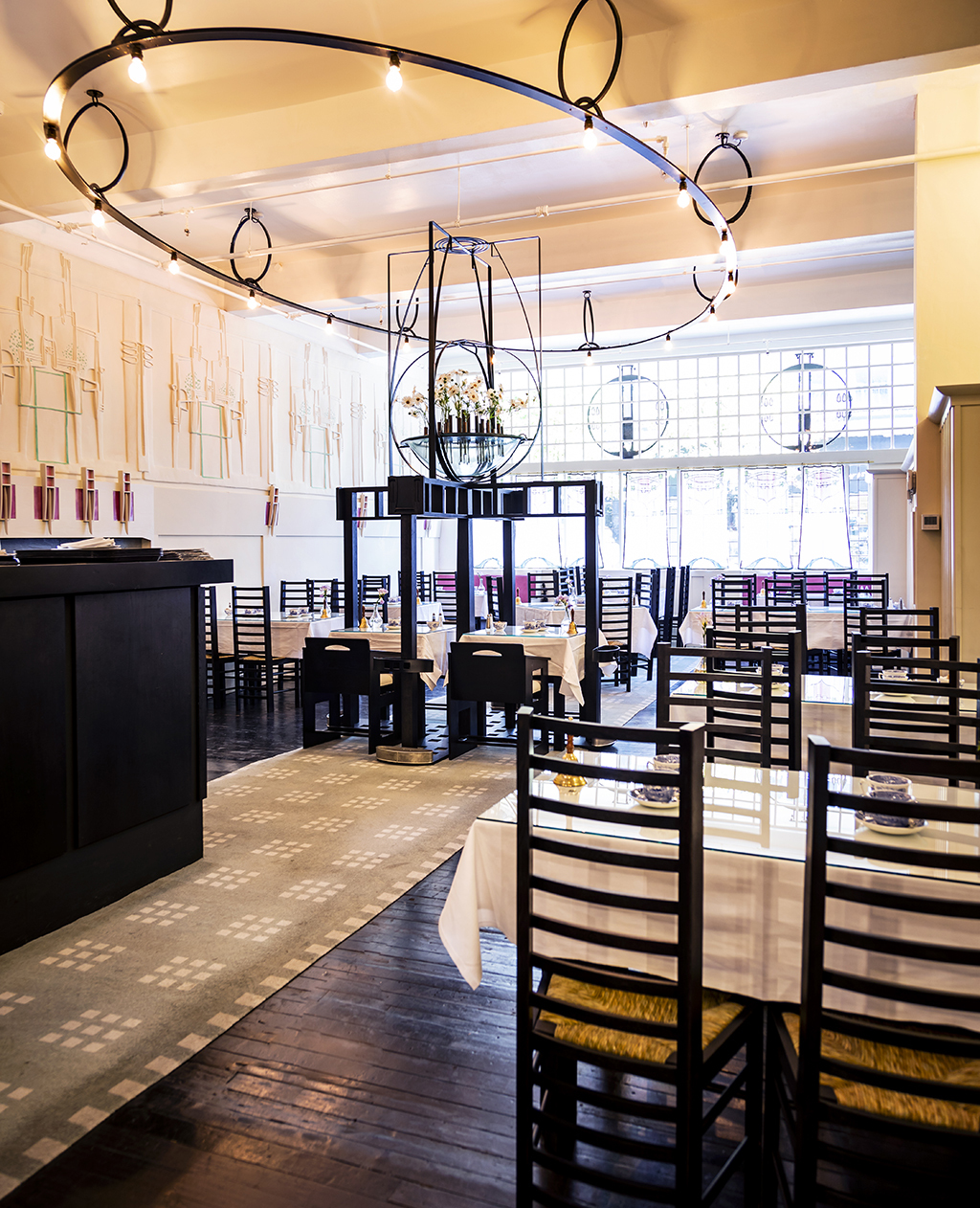 Glasgow's Charles Rennie Mackintosh treasures include the newly restored tearooms at Mackintosh at the Willow. Photo courtesy of The Willow Tearooms Trust/Rachael Keenen.

Focused on contemporary design, Mackintosh grew up in a city that offered many distinctive examples of architecture. Walking the streets near George Square offers many prime examples of the 18th and 19th building design, and the Glasgow City Chambers is worthy of a peek as this Beaux Arts building features a stunning mosaic ceiling with gold leaf and stained glass. The Glasgow Cathedral is a remarkable example of Scottish gothic architecture.

As Glasgow changed in recent decades, local fans made sure to preserve Mackintosh’s work including his residence, where he lived from 1906 to 1914. Mackintosh House is now part of the University of Glasgow’s Hunterian Art Gallery. Small groups can tour the multi-storey home, original décor meticulously reassembled and showcasing Mackintosh’s designs of lighting fixtures and furniture, and artwork by his wife Margaret Macdonald Mackintosh, a successful artist of the early 20th century.

But the best way to immerse yourself in the world of this Glaswegian designer is at Mackintosh at the Willow for afternoon tea. Mackintosh designed several tea rooms for Miss Kate Cranston in the early 20th century, the first opening in 1903. In 2014, one of the original buildings was purchased by the Willow Tea Rooms Trust, restored and reopened in 2018, 150 years after the birth of Mackintosh. The striking black and cream tea room features exact reproductions of the original designs by Mackintosh from cutlery to furniture. It’s a room filled with locals and visitors enjoying many a cup of tea, besotted with Mackintosh’s designs – as au courant in the 21st century as they were in the early 1900s. 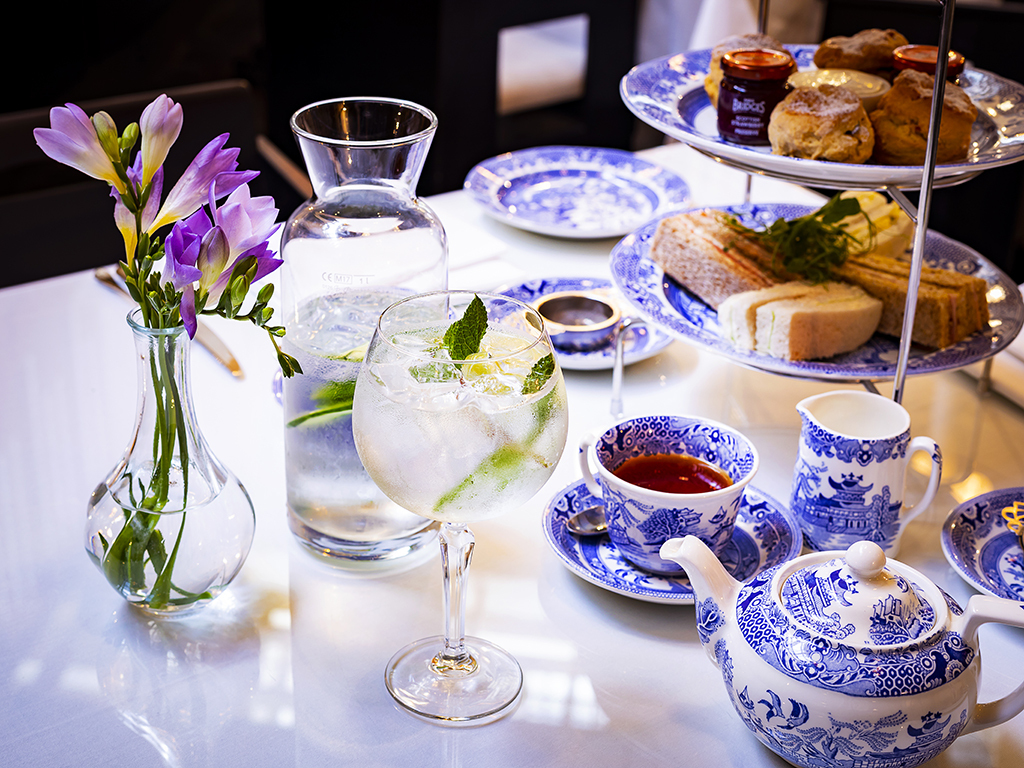 LEAVING THE TRAIN station, I arrive in sunny Dundee (not a joke, this is the sunniest city in Scotland) and its bright outlook includes a new attraction across the street: the V&A Dundee. Opened in September 2018, the first design museum in Scotland showcases a wide arc of Scottish design from Alexander McQueen dresses to original designs of the popular video game Grand Theft Auto. Architect Kengo Kuma wanted this new museum to be like a living room for the residents, to draw them back to the port, which was a bustling place a century ago. As a city known for manufacturing, Dundee’s embrace of the arts and technology has led to its being recently proclaimed a UNESCO City of Design.

After exploring the museum, I stroll through new waterfront neighbour, Slessor Gardens, a place for locals to walk, bike and picnic. New bars and gift shops are taking up residence in the streets leading to the McManus. It’s the oldest art gallery and museum of the city, opened in 1867 and is regularly populated with art enthusiasts of all ages exploring its mix of art and pop culture exhibits.

Walking from downtown to the university district, I find there are more bicycles and less cars, with any available space plastered with posters heralding upcoming concerts and art exhibits. Tucked between vegan cafés and pizza joints is the Dundee Rep Theatre, with a packed schedule of theatre, dance, music and comedy, while nearby, the Dundee Contemporary Arts, offers modern art exhibitions, printmaking studios and art films. Street art is also part of the city’s renewal – the OpenClose Project has created two art trails, featuring 19 doorways that have turned neglected entrances into brightly-coloured Canvas for local artists. 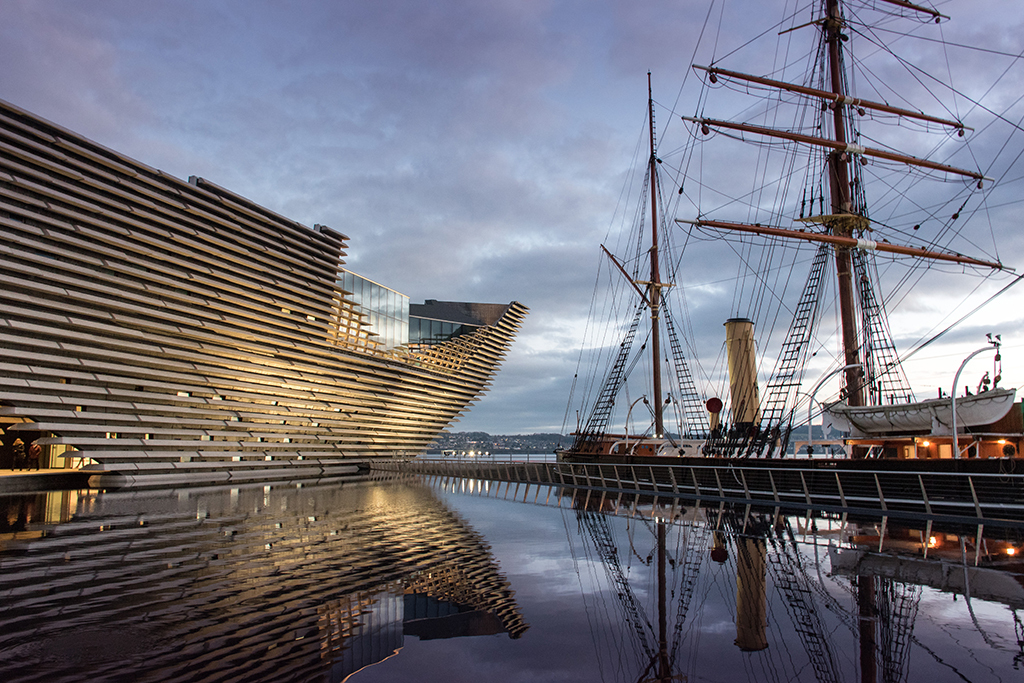 The past inspires the new in Dundee: Draffens, a former department store is now a speakeasy bar while the recently-opened restaurant Daisy Tasker serving modern Scottish cuisine is named in honour of a local textile factory worker and community organizer.

Back at the waterfront is the hangout of choice for a growing crop of young professionals, the Wine Press Bar, where newcomers are welcomed and the happy hour drink of choice is made with Verdant Spirits, the product of a local gin distiller. Slainte to welcome changes in this evolving city!

IF YOU GO Your travel professional can advise you about a number of airlines to transport you quickly to several Scottish cities. For great accommodations check out the Balmoral, Edinburgh. Located at No. 1 Princes Street, it’s an elegant hotel with many opulent amenities including suites individually-decorated by Rocco Forte Hotel inhouse designer Olga Polizzi. The newly-opened boutique hotel, the Hotel Indigo celebrates Dundee history and style with a colourful contemporary lobby, showcasing publishing artefacts and artsy rooms featuring a luxe combination of locally-made textiles and furniture.

New Ports and New Avalon Cruises on the Danube in 2021