Getting Personal with California Gray Whales

THE MEXICAN FISHERMAN operating our Panga, a small fiberglass fishing boat, knew what he was doing as he scanned the horizon. With keen eyes, he was looking for signs of California gray whales. He pointed. My fellow guests and I squinted into the distance, barely seeing anything at first. Then one after another, the whales appeared.

On a traditional whale watching excursion, you hope to see a blowhole or two, maybe catch a glimpse of a tail. But you don’t expect to see several sleek gray backs skimming the water right in front of you. And surely you don’t expect to touch a gray whale.

Lindblad Expeditions-National Geographic has set out to do something different with its new Whales of Magdalena Bay itinerary on Mexico’s Baja Peninsula. The focus of the six-day cruise is whales, though there are also opportunities, to spot birdlife, to kayak through lush mangroves and explore uninhabited white sand beaches and dunes, and to bike. An outdoor evening picnic on a beach comes complete with a camp fire.

Gray whales are the main draw. The whale season in Magdalena Bay is short; mid-January to mid-March, when the whales arrive after an extraordinarily long migration from chilly Alaska. Like tourists over in Cabo San Lucas, the whales come to Mexico for sunshine and warmth. In the protected waters of the bay, they mate, and return a year later to give birth and rear their young, before the return trip north. 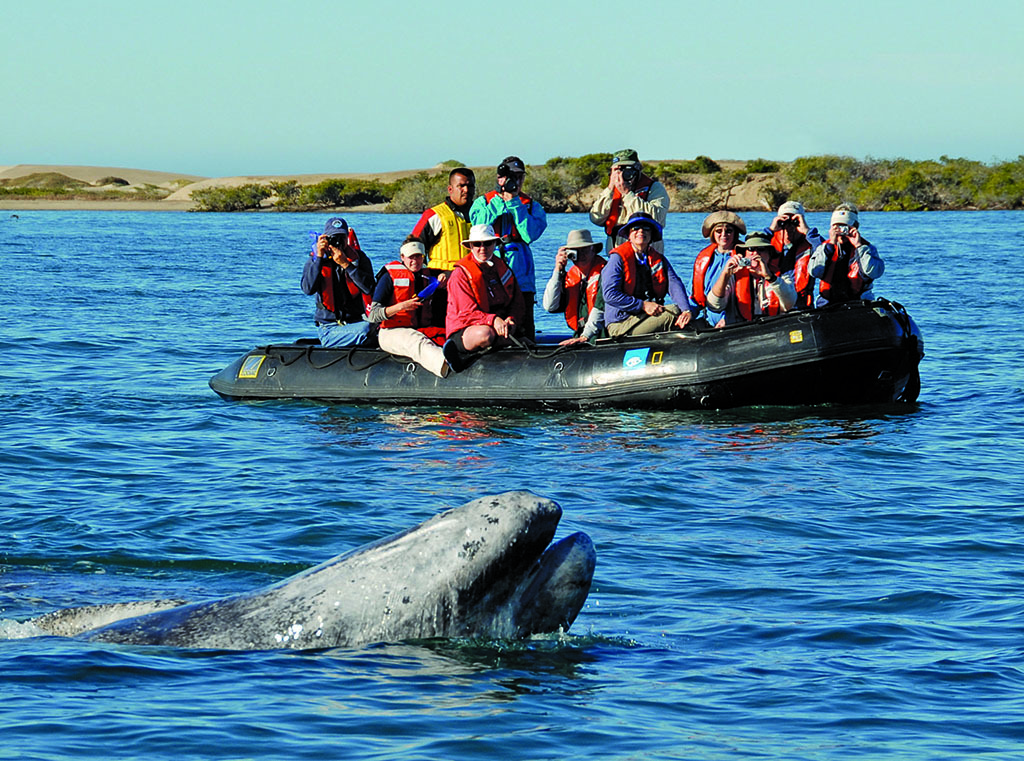 My fellow travellers and I were part of a group hosted by Sven Lindblad, CEO and founder of Lindblad Expeditions-National Geographic, and members of his executive team, checking out the new itinerary, which officially begins in January 2020. On our preview sailing, along with journalists and travel advisors, were representatives of both local and Central American conservation groups. We were guinea pigs on a cruise purposely designed so that cruise guests can be in and out in a week – perfect for those looking for shorter vacation options.

The trip begins with a flight from Los Angeles to Loreto, Mexico, and then a three-hour coach ride to San Carlos, where you board the 62-guest National Geographic Sea Lion, a comfortable base camp for exploration. The ship is casual, the kind of atmosphere where you could walk across the lounge in bare feet and no one would look askance. Binoculars, cameras, and reusable metal water bottles are more valued accessories than shoes.

All of the neat little staterooms have a window for views. Most are configured with fixed twin beds (though there are a few where beds can be converted into a double) done up in crisp white sheets. A curtain in the bathroom protects the toilet when you take a shower – your sink is separate, near the beds.

In the open-seating dining room, food is beautifully prepared and plated, the bartenders know what they are doing in the lounge and if you awake early, you can do a sunrise yoga class with inspiring views. Those are the only extravagances onboard. The main form of entertainment is lectures, delivered by the ship’s naturalists and a NatGeo photographer. But you won’t dwell much on any of that, as you’ve come to commune with whales. 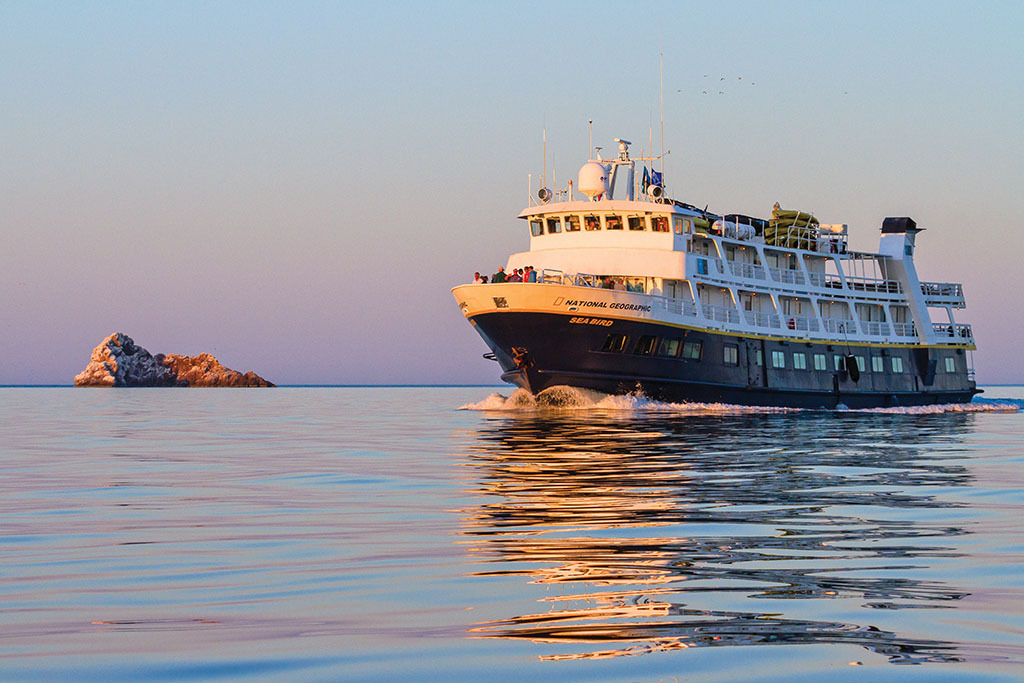 Lindblad, unlike other small ship operators, visits both the southern and northern areas of Magdalena Bay. The southern part only recently opened to visitors with a very small number of licenses issued. It’s where whales mate and give birth. The northern area, where the whales raise their young, is slightly more on the tourist path but still with limits on how many small boats can operate – land-based tourists can hire a Panga and guide to get close to the animals. Some 20,000 whales may be present in the north during the prime mid-winter season.

Lindblad takes its time and for several days you explore the warm waters with whales. The ship’s naturalists and local fishermen make sure rules on not disturbing the mammals are followed.

In the south, in clear blue waters, the whales kept a distance but approached our Pangas as if we were a curiosity, showing off a back or a fluke before moving on. In the north, often with calves in tow, they came right up to our Zodiacs (with local guides onboard), a behavior they exhibit in this bay, and nowhere else in the world. No one knows why, but one guess is that they want to teach their young about humans.

It is legal to touch the whales in Mexico, and for everyone on the Lindblad ship, that was a goal. The expedition team and naturalists on our cruise did a good job of explaining what we were getting into. We crouched over the sides of our Zodiacs, gently stirring the water in an attempt to communicate. The whales got the message. 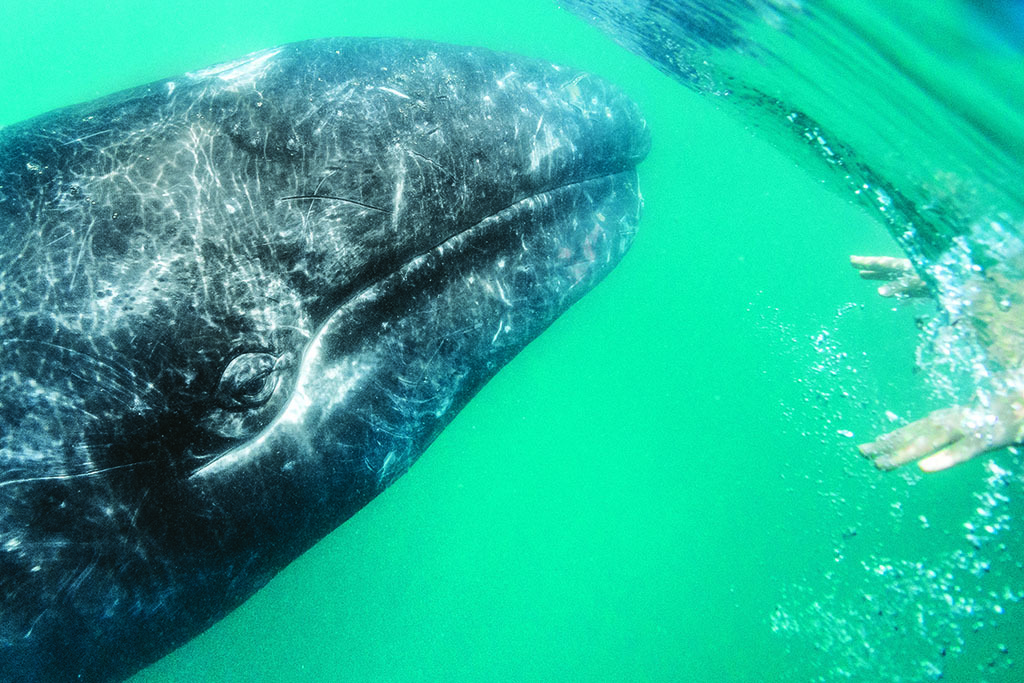 The backs of gray whales are covered by hard barnacles along for the ride, and inside these are whale lice. We were advised not to touch these, and also warned to close our mouths if the whales blow, because there is such a thing as whale flu.

That aside, when a whale comes up to your inflatable boat, so close that you can reach off the side and rub a patch of silky gray skin, you go for it. In the process, you gain bragging rights but so much more. You feel like you have managed to have a bonding experience with an 80,000-ton whale mother and her calf and somehow, in a man-meets-animal kind of way, you are all the better for it.

Lindblad Expeditions-National Geographic is a company that takes both conservation and connection to local communities seriously. The cruise operator recently announced it will become a carbon neutral company, beginning this year, making investments that effectively offset 100 percent of emissions from its ship (eight of which are owned by the company and others that are leased). The company’s other sustainability initiatives include mandating supply chain solutions to eliminate plastic, making crew uniforms from recycled plastic and sourcing local, organic produce. Lindblad and National Geographic encourage their travellers to make voluntary donations that go towards conservation, education and other projects including in support of the coastal communities the ships visit.

Visits to Cuba on the Horizon for Virgin Voyages

VIDEO: Wonder of the Seas Steel Cutting to Delivery Mashup