Greece Off The Grid

THE CITY RISES ON TWO HILLS, buildings of white and pink and orange and blue, climbing away from the sea. One is crowned with a Catholic Cathedral, the other, an Orthodox church. Settlement on this island dates back more than 5,000 years, and as we walk the waterfront, past the statue of Nike, guide Kalypso Faropoulou recounts Syros’s prominent role in Greek mythology. It played a part in the Trojan War and, she adds, Homer wrote about it, in his Odyssey. “He said it was a very rich island.”

That wealth came to fruition in more recent history, with the island developing into a major economic centre in the 19th century, its importance as a port outpacing even Piraeus, now the main sea port in Greece. As we begin to climb one of those hills, with me huffing and puffing a bit as we make our way up the tiled streets, it’s clear that markers of that heady period remain. Notably, the town hall on Miaouli Square, which looks like a palace and remains the administrative center for all of the Cyclades. There’s also the Apollo Theatre, named for the god of music and finished in 1864, it was the first opera house in the country. It opened with a performance of Rigoletto, and looks like a scaled-down version of La Scala, in Milan. “Just look around,” says Faropoulou, “and appreciate the prosperity of this place.” 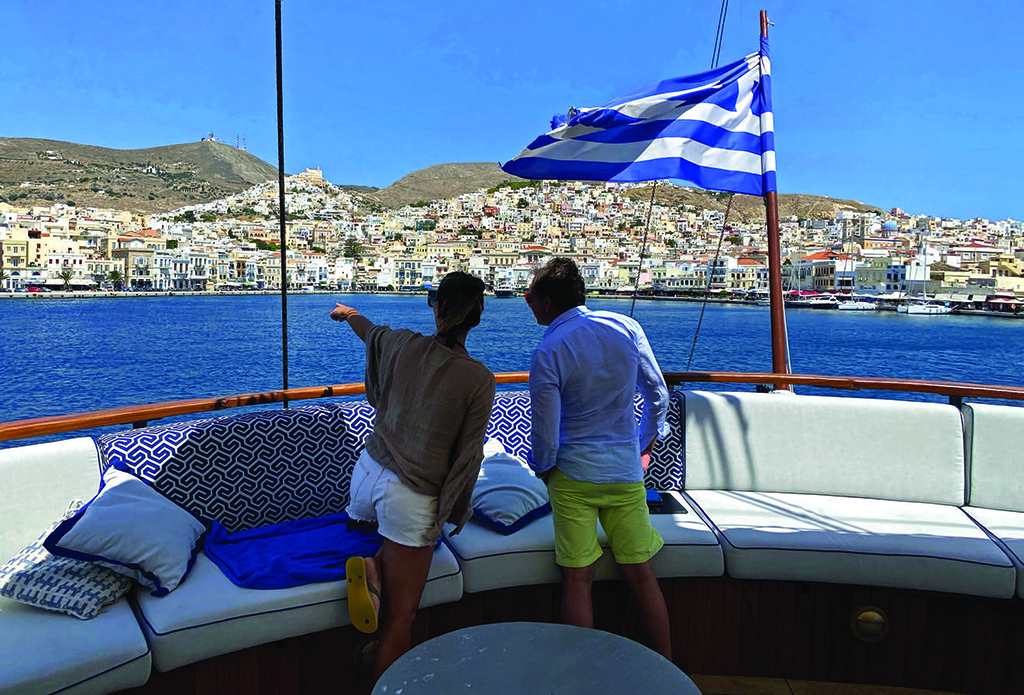 Syros is a special island. But most ships – and tourists – sail right by, in search of more popular places to alight, like Santorini and Crete. I’m on board the MV Galileo for a week, one ship in a fleet of eight SOLAScertified yachts owned and operated by Variety Cruises, an Athens-based company. While we do visit some of the well-known highlights (including Santorini), most of the ports-of-call are like Syros, where so much beauty, history and culture hide mostly undiscovered by the casual visitor to Greece.

Variety loves being small – in fact, it’s their trademark. The company prides itself on an intimate experience, whether you’re sailing in the Seychelles, in Egypt, rolling on the rivers of West Africa, or gliding through the Aegean on one of their signature voyages in Greece. “It allows our guests to go deeper into the destinations, deeper in to the communities, deeper into the local culture, cuisine and traditions,” says Filippos Venetopoulos, the company’s young, dynamic CEO. Founded in 1949, the company remains family-owned, and crew get to know every guest on a first-name basis. Guests sit together for dinners at long tables and the evenings often develop into rollicking affairs, with everyone sharing their stories from the day. 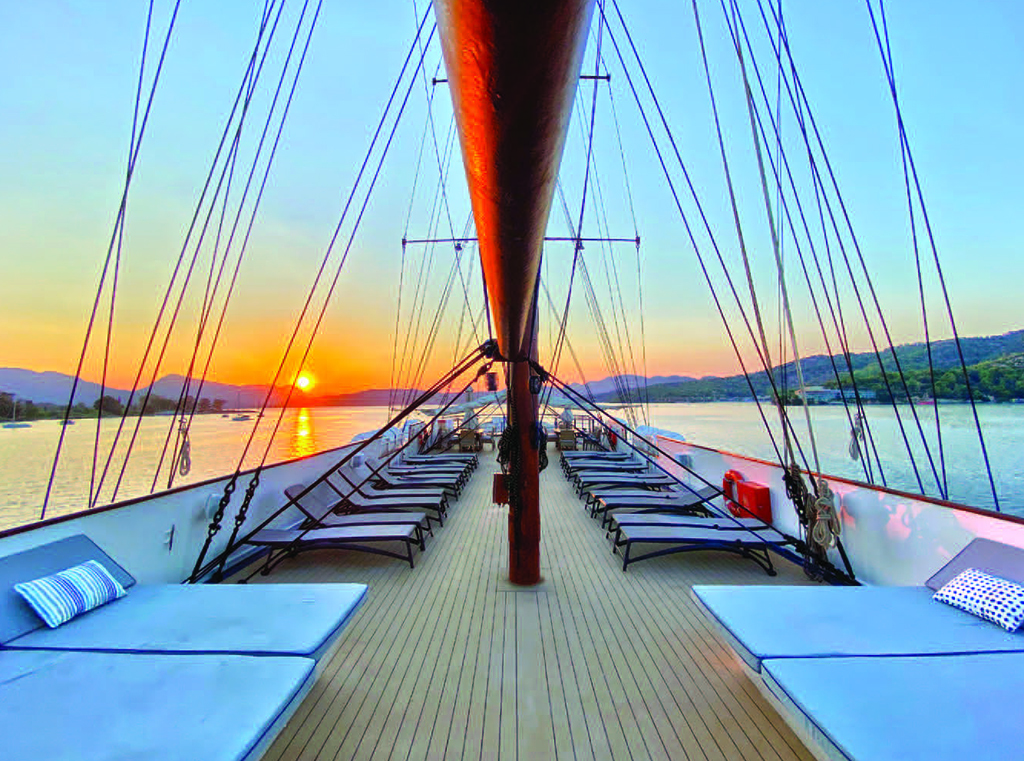 That’s the case, all along the way. On the first and last nights, we visit islands in the Saronic Gulf, not far from Athens. But they’re a world away, with bustling fish and fruit markets, harbours lined with sailboats, and outdoor restaurants with just a few tables, serving up steaming squid and octopus. In all, the itinerary visits almost a dozen islands in the archipelago between Athens and Santorini, each with its own unique character.

On the lush, green island of Paros for example, we tour Lefkes, once a bustling hub and the island’s first capital, now a small village home to just 600 people. Later, we swing by the broad expanse of Golden Beach, empty on a relatively cool afternoon. On Syros, my feet aching, just a little, from the climb up the hill, the tour descends and ends with an included lunch at a small restaurant specializing in local favourites and set on a pedestrian street covered in bougainvillea. We dine on feta and aubergine and parsley salad and pork sausage, and agree that the view is almost as good as the food.

Even on the busier islands, the experience remains personal. On Santorini, we have a small-group tour of Akrotiri, a lost Bronze Age city that once boasted three-story homes with frescoes, where residents wore beautiful clothes, jewellery, and cosmetics, all buried under volcanic ash 3,700 years ago. (Some believe this is Plato’s Atlantis.)

For my week, round-trip from Piraeus, the Galileo isn’t just a conveyance to deliver me to the various ports, rather, it’s a key part of the experience, just 147 feet long and hosting a maximum of 49 guests. People gather together in the morning on the sundeck to watch our arrival at a new island, and in the evening in the open-air bar on the stern, sipping gin-and-tonics and watching the sun set from a big, cushy banquette tracing the back of the ship. Staterooms are small, but offer unfussy comfort. The lounge is panelled in wood, and feel like a place where Aristotle Onassis would probably have enjoyed hanging out. It doubles as the dining room, long tables on one side, big, round couches on the other, snug but stylish. The cruise director’s desk and reception are two steps away, and stateroom, just up or down on two separate decks are always close by.

Most of the ports are a surprise, their names unfamiliar at first. At one point, we stop for an impromptu swim, and people paddle around, right from the gangway, cooling off in the Aegean waters. Cruise director Stella Giannopoulou says that’s just part of the typical experience. “The captain finds the best places, I can’t even describe it,” she says. “The islands we visit, they’re unspoiled, not a lot of tourists, and you see how normal people live. It’s like they’re private, and booked just for us.”

Just next door to Mykonos – an island perhaps best known for its beaches and parties – we have one of the finest tour guides on the island lead us through Delos, a vast archaeological site. “Your ship was a time machine,” says Amaryllis Grypari. “Get ready to go back a few thousand years.”

According to Grypari, the birthplace of Apollo, the four-mile-long island of Delos, was a pilgrimage site, with all ancient Greeks travelling here – or, at least, hoping to do so. With so many visitors, shops opened, and it became a major trade hub, with Alexander the Great opening roads to allow even greater access. “By the time the Romans got here 200 years later, it was a gold mine,” she says, noting that they made it into a duty-free port, further increasing its value.

But again, as on other islands, the most striking aspects are those drawn from the day-to-day. A mosaic in a courtyard, once in the centre of a house, filled with water to cool the inhabitants from the heat of the day. Hundreds of mosaics. Places of business and worship. “We’re walking through everyday life – through history, not past it,” says Grypari. And I feel that’s been true all along, the Galileo taking me through the beating heart of the Greek Islands, with a cold gin-and-tonic, and a few new friends, waiting back on board.