WHO KNEW THAT WHALES COULD FLY? We had been following two magnificent humpback whales for several minutes as they swam beside our Zodiac. Our driver kept a respectful distance, but the curious whales were not shy. They surfaced, arcing their long dark bodies, and then silently slipped back into the St. Lawrence. Then they were up again, close enough for us to see barnacles attached on their scarred skin. Finally, they lifted their expansive tails high and disappeared into the steely depths.

“When they show their tails they are diving deep, and often won’t surface for 10 minutes or more,” we are told by our guide and naturalist Catherine Dube. “They could come up anywhere.” We scanned the surrounding waters, cameras at the ready. Suddenly, the pair shot out of the water in splendid synchronicity – so high and with a grace and elegance I would have though impossible for such huge animals. They both tilted right and came down in the sea with a great splash, close enough for us to feel the spray. Our guide squealed in delight – while silence settled on the rest of us – thinking that 12 metre, 28 tonne creatures could take flight. 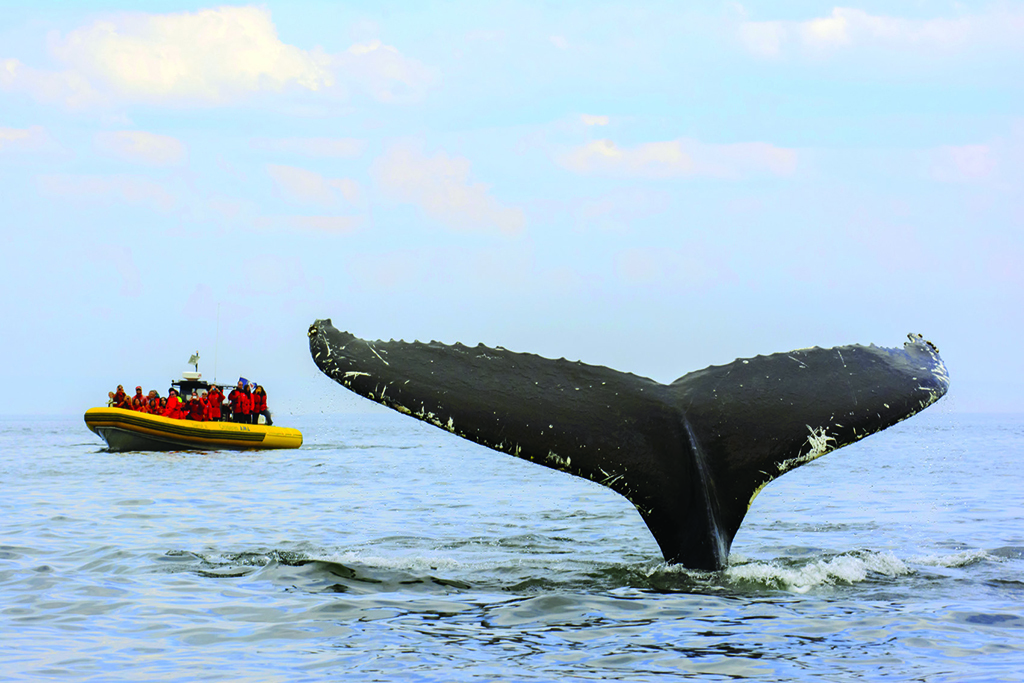 We had set off that morning from the pretty little village of Tadoussac, eight of us onboard the Sentinelle III, a compact and comfortable Zodiac. “We are meant to observe – not disturb,” lectured Dube, as we set a slow pace out of the Saguenay fjord, carefully meandering through a pod of beluga whales. These are not the first belugas I had observed in the park. The previous day, having driven northeast three hours from Quebec City along the north shore of the St. Lawrence, the highway was interrupted by a ferry waiting to shuttle vehicles across the fjord to Tadoussac. Our crossing was delayed, allowing a dozen beluga whales to pass, their smooth white bodies clearly visible bobbing in the leaden grey waters like ice caps. The endangered beluga is this park’s most famous resident.

The 1,245 sq km Saguenay – St. Lawrence Marine Park, a joint creation of Quebec and Parks Canada, is located at the confluence of these two great rivers. Our Zodiac outing impresses not only with the quantity of whales that we see, but also the variety. Besides the belugas and humpbacks, we see minke whales, fin whales and harbour seals. Often spotted are the enormous blue whales. In addition, we are told, even a single and confused narwhal from the Arctic had been spotted recently, after an evident wrong turn brought it into these rich feeding grounds. The cold, salt waters of the North Atlantic encounter fresh water flowing out of the St. Lawrence, stirring up an accumulation of krill and fish upon which whales feed. The beluga and harbour seal are the only marine animals that live here year-round. The other whales, including our show-boating humpbacks, migrate between the park and their mating grounds in the Caribbean. 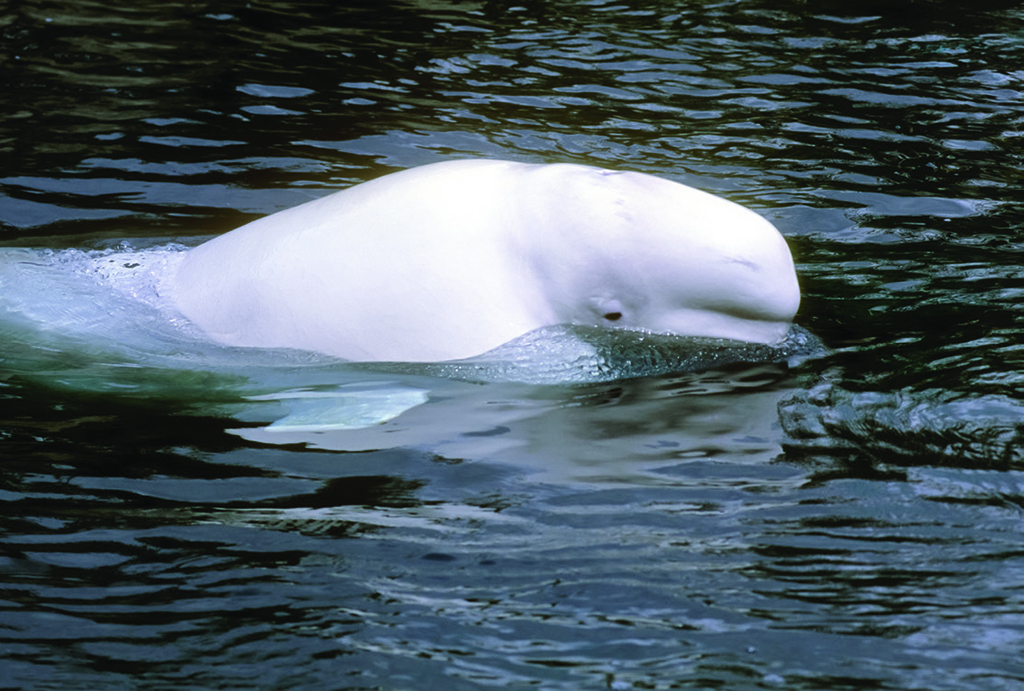 Boating is one way to observe these magnificent mammals, there are also many excellent viewing areas on land. The Parks Canada Cap-De-Bon-Desir Interpretation and Observation Centre explains what lifeforms we might find on the sea floor and offers a whale-watching vantage point on its shoreline. At first, we saw only freighters moving up the seaway outside the park boundary, a subtle reminder of why this protected area was necessary. Then a minke whale broke through the surface metres from our viewpoint, slowly following the rocky shore.

The Marine Environment Discovery Centre at Les Escoumins educates visitors about the park’s aquatic environment and conservation efforts. Guests can participate in an underwater dive without getting wet, in a theatre watching biologist-divers equipped with a camera and mic go live beneath the St. Lawrence River. Feeling brave and wanting more, I donned a wet suit, mask, snorkel and fins and dive into the river’s 2-degree Celsius waters. I am shocked, not by the cold, but by the colour and variety which I see, starfish, vivid sea anemones, urchins, sea cucumber, and jellyfish. 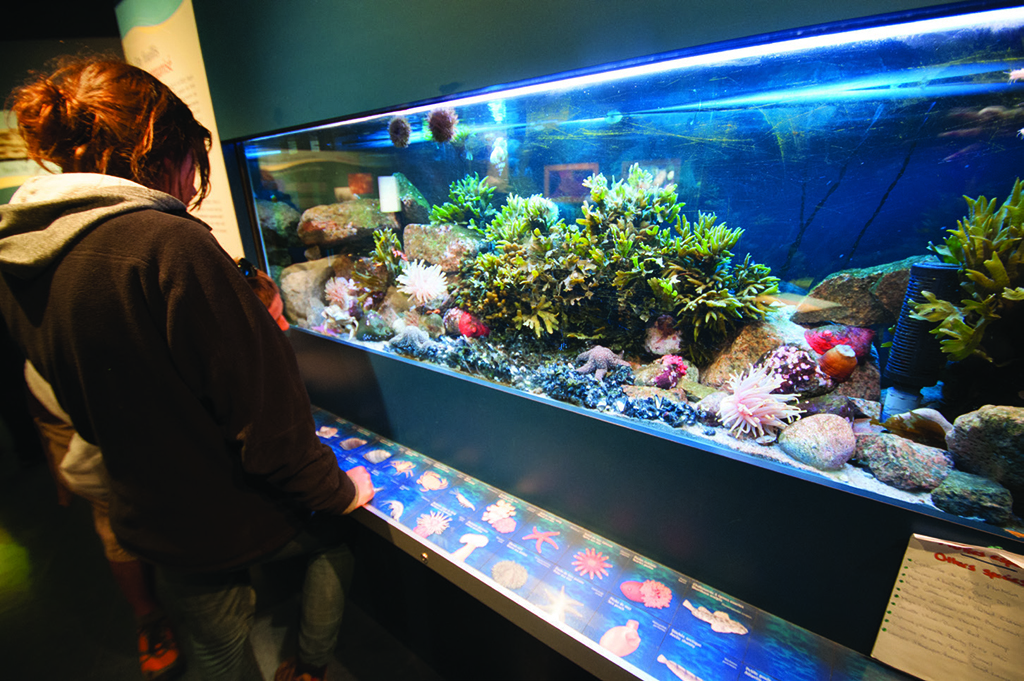 Also worth a visit is the Marine Mammal Interpretation Centre in Tadoussac where they keep a daily record of whale sightings. Inside is an impressive collection of whale skeletons; bones you can touch, whale sounds to listen to, and photos to help you identify the specific whales you might see. I recognize one of our humpbacks as Tic Tac Toe – so named because of the “X” mark on her tail. Identifying her, I must admit to a special affinity with this magnificent creature of the deep – summering in this spectacular marine park, wintering in the Caribbean.

Scenic Eclipse Elevates the Ultra-Luxury Cruising Experience with New Enhancements, Offers Savings of up to 20% on Select 22/23 Voyages

In Conversation with Alberto Aliberti, CEO of Atlas Ocean Voyages