FLOWING WITH MIGHTY RIVERS, filled with endless forests, covered in the rocky outcrops of the Canadian Shield, much of Quebec remains a wild place. Yes, of course there are farms. Plenty of them, providing milk and grains and meat. But for Chef Stephane Modat, he prefers the great outdoors. “Out in the wilderness,” he tells me, “That’s where you find the real taste of Canada.”

French-born, Modat has an immigrant’s zeal when it comes to exploring his adopted country. He has been awarded some of the province’s top culinary honours, and runs Le Clan, one of the hottest restaurants in Quebec City. Over an evening filled with five courses, I taste a swimmingly delicious, fish-themed meal – Nordic shrimp, speckled trout, halibut from Gaspé, with hazelnut butter, and parsley root cream. A little surprise at the end, caviar and gin. It’s all from right here in La Belle Province. 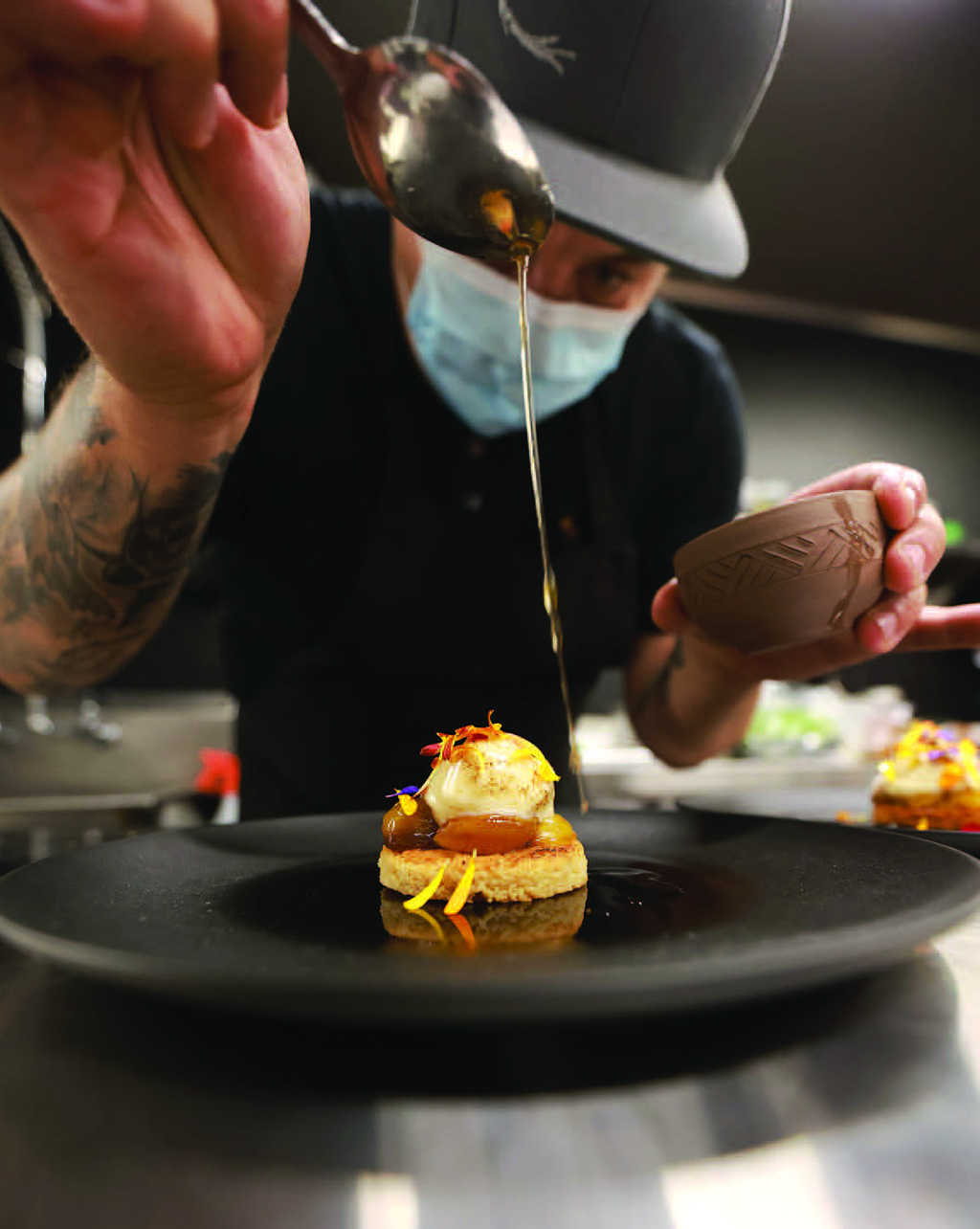 But to truly experience the flavours of Quebec, you need to visit the wilderness, yourself. The freshness is all accessible and available with a nice autumn drive, so much of it within just a few hours of Québec City. Here are three regions that I’ve explored, and that you should, too.

Less than two hours to the northeast, the two-lane Highway 138 traces the north shore of the ever-widening St Lawrence River. At Montmorency, a waterfall gushes. The hills rise higher at St-Anne-de-Beaupre and as I roll over the lip of the crater, the river now spreads out as big as an inland sea, the green flanks of small mountains sloping down to the broad expanse of blue, all of it part of a UNESCO Biosphere Reserve. 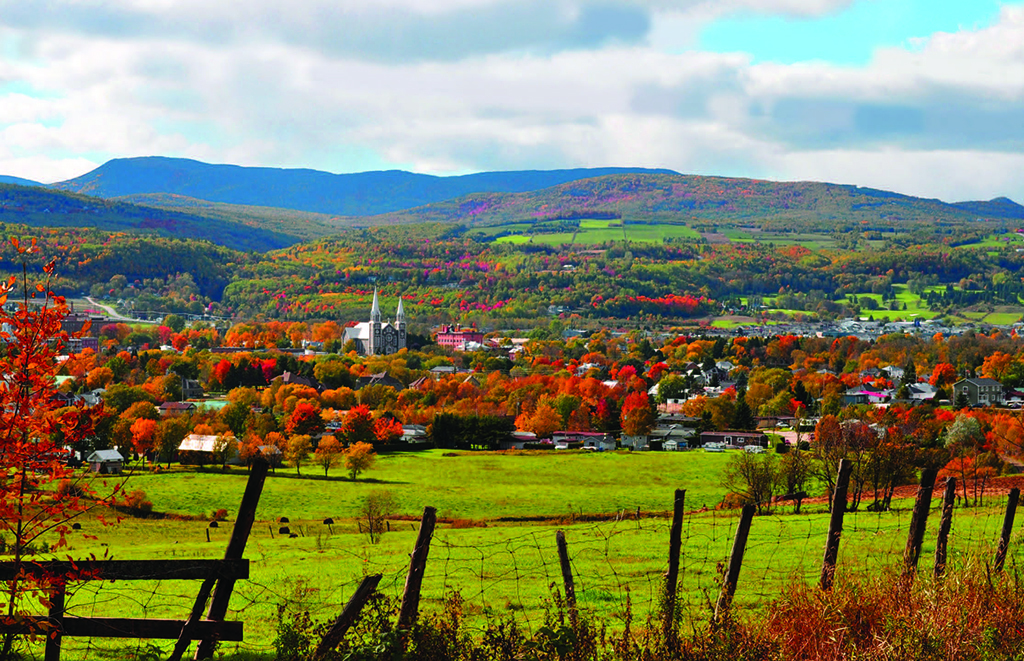 A meteorite created the dramatic landscape at Charlevoix some 400 million years ago, carving a crater 54 sq km in diameter, a microclimate where the mineral-rich soil brings forth a diverse bounty. I spend the next few days tasting it all, around the

charming riverside village of Baie-St-Paul. At a place called Azulée, I meet the owner of an organic farm, where they grow a variety of herbs, especially lavender, which they mix into jams, brownies, even use as a fleur de sel for cocktails. I visit a mushroom farm, and a duck farm, and a distillery where all the grains for their gins and vodkas are harvested right here, on these shores.

The whole adventure finishes with a meal at Mouton Noir, a simple restaurant in Baie-St-Paul with a broad patio set on a meandering creek. The chef, like a great conductor, brings together all the best ingredients of the region. That duck, with roasted beets and parsnip purée. Pork and red tuna Carpaccio with arugula and smoked herring mayo. Lamb, and veal, and so much more. A masterpiece of fresh, local flavours. 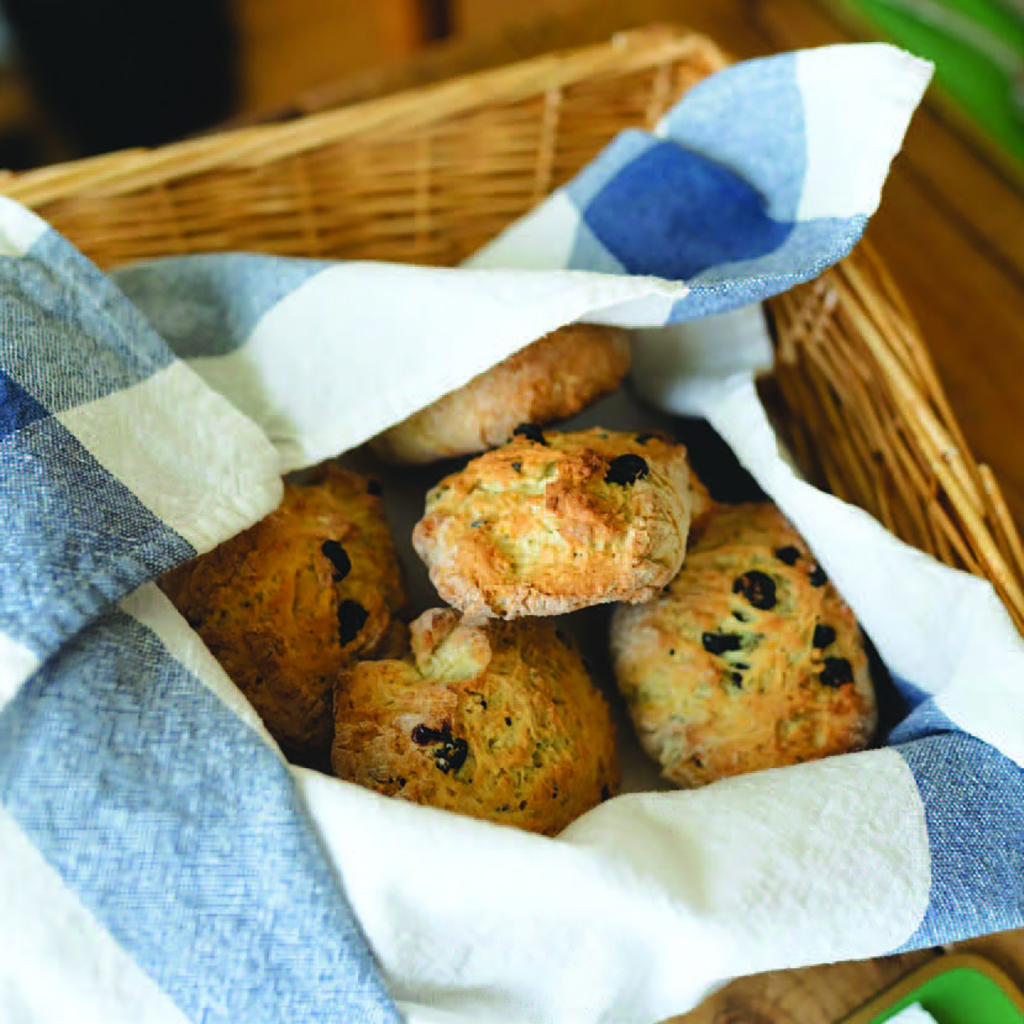 Several hours further on, along the southern edges of the river, then beyond, out to the Gulf of St Lawrence, the Gaspé Peninsula juts into the sea, forming the province’s maritime region. Here, in villages stacked high with lobster traps and little harbours lined with fishing boats, it’s all about seafood. At Banc-de-Peche-de-Paspebiac Historic Site, I tour the complex of restored wooden buildings and learn how, for hundreds of years, this place was a cod-fishing powerhouse. Boats heavily laden with fish would sail into the wharf, and as many as 2,000 hardworking women and men would split, dry and salt the cod, shipping it across the oceans to nations around the world. I finish my tour in the little on-site café with simple, super-fresh seafood, whatever’s in season, with shellfish sourced from the boats you see just across the way. 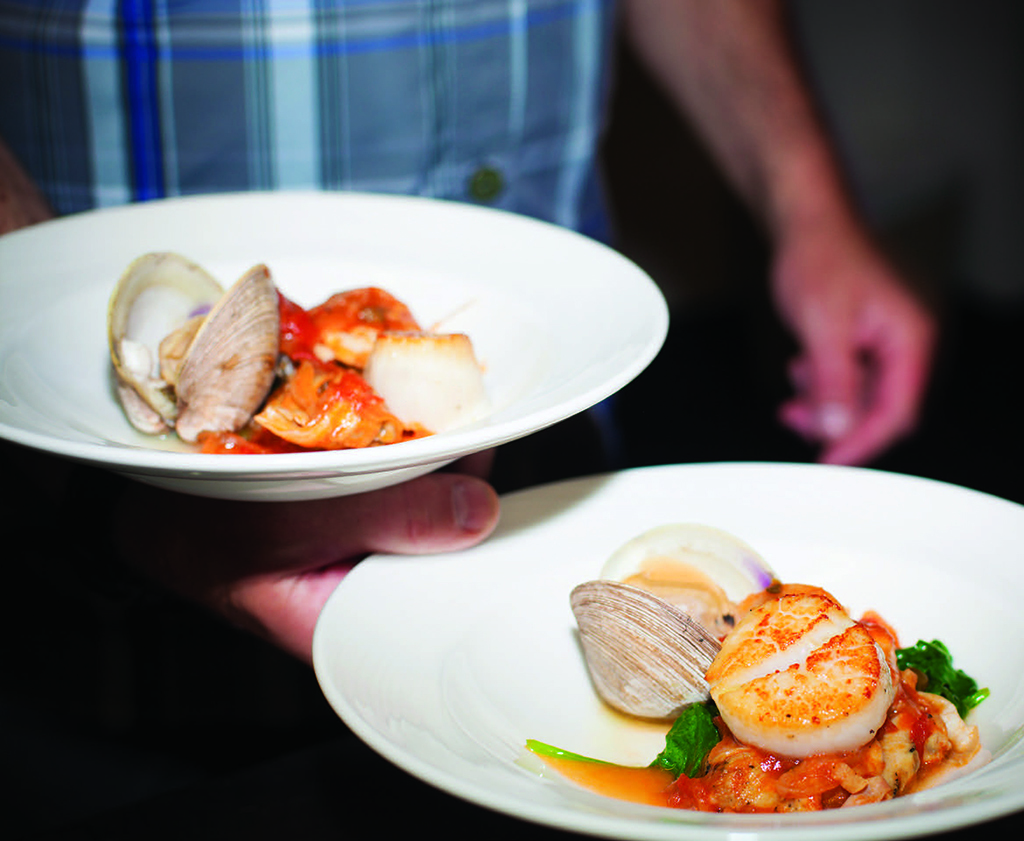 The rest of the drive, a loop that skirts the sea, mountains to one side, ocean to the other, is full of little culinary surprises. In Matane, I find a good fromagerie, serving up the best brie, curds and camembert from across the province. In Carleton-sur-Mer, a tourist town with a picturesque lighthouse, I walk off my indulgences on their one-km waterfront boardwalk. At Forillon National Park, I hop on a zodiac and search for humpbacks. In Percé, in the shadow of its famous rock – 400 metres long, and 90 metres high, with its famous arch – I find a restaurant with floor-to-ceiling views, seared scallops and perfectly prepared lobster. And up in the mountains, at a rustic lodge inside Gaspésie National Park, I dive into poutine – that late-night Quebeçois favourite, elevated with rabbit sausage and the cheesiest curds you can imagine.

A short drive southeast of Québec City, this is a region hidden to many travellers. A region the size of Switzerland, more than 80 percent remains natural and preserved. It’s a place where each turn brings a new surprise. In La Mauricie National Park, short hikes lead to overlooks with sweeping views of serpentine lakes. Drive for a few minutes in any direction, and you’ll find a charming village, or a local winery. The main autoroute linking Montreal and the capital passes right through Trois Rivières, the region’s largest city. It is one of Canada’s oldest, founded in 1634 as a rough-and-tumble pulp-and-paper town. Today, its main street and an adjacent pieton are now lined with good cafés and gastro-pubs. 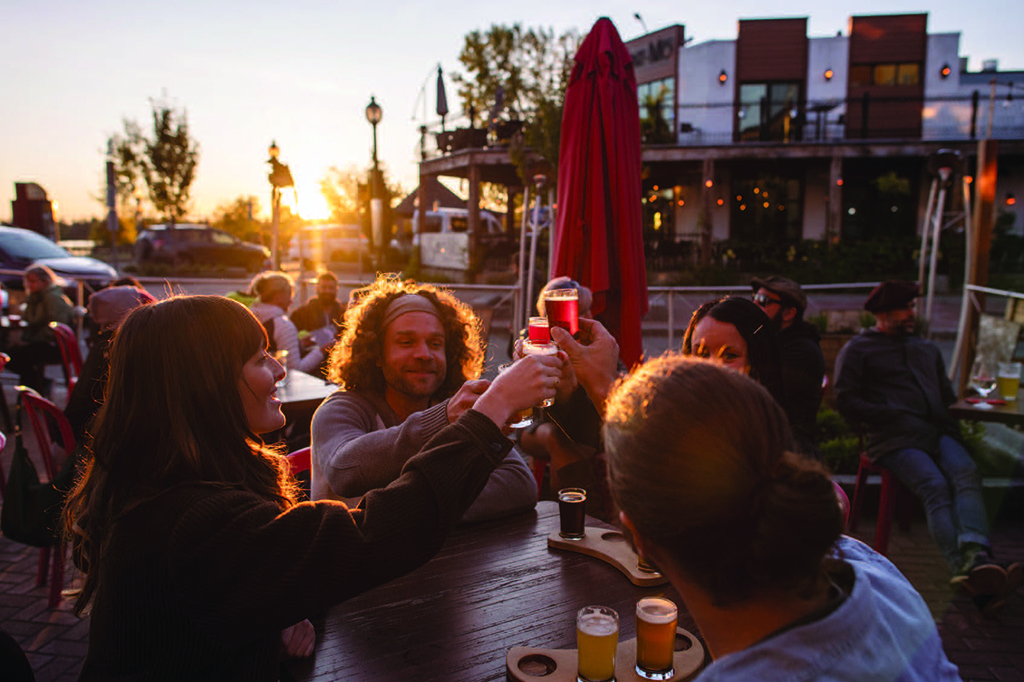 Beyond the town, I climb into a land of lakes and hills, north, away from the river, along meandering byways, discovering my own culinary trails. In the small city of Shawinigan, Trou du Diable brews up some of the province’s best craft beers, including the Shawinigan Handshake, named, and labelled, for the former prime minister’s infamous encounter with a protester.

The main street in town has a number of little restaurants, and you can sample smoked meat from a local favourite, an unfussy food stand where you grab your sandwich and sit at a nearby picnic table.

And, now really into the woods, I stay at La Sacacomie, a sprawling log-cabin hotel with a crackling fireplace in the lobby, and a series of spa pools overlooking the water. And then down the road at Lac Blanc, a family-owned lodge (full name: Pourvoirie du Lac Blanc) set amongst 35 sq kms of undulating forest and shining rivers, ponds and lakes. It’s rustic, but comfortable, with spacious rooms and cushy beds and views out over the namesake lac. 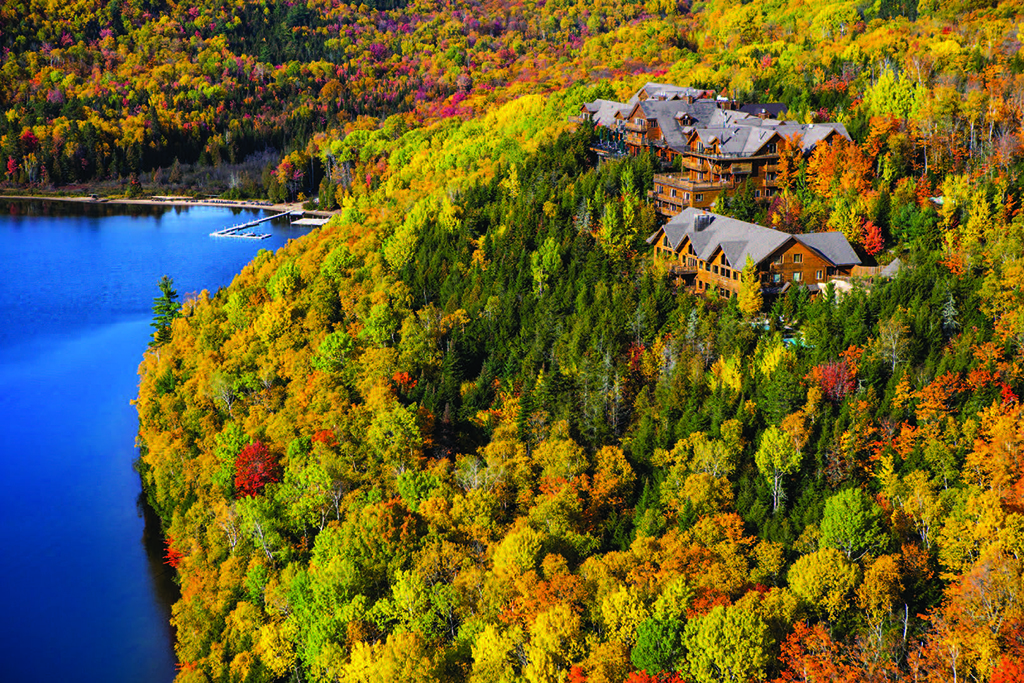 First, I have an overview in a helicopter piloted by one of the sons in the family; then, a meal, lakeside, cooked up by another son, a chef. The menu includes all sorts of local ingredients, but features one that’s very abundant here – trout – served in a salad, as a chowder, as a tartar, and fileted, three different ways. The steaming plate of fish arrives at my table, and the taste is perfect, flaky and white, firm but tender, topped with just the right amount of local herbs.

Looking out at the lake, the last light of the day casting orange and yellow hues over the water, I imagine that this fish tastes like the Québecois wilderness itself – a flavour that, back in Québec City, I’m sure Stephane Modat would approve.

Holland America Line Extends ‘Save Now, Cruise Later: Have It All’ Promotion

Go ahead…wander at will at Wander the Resort