WE MADE OUR FIRST VISIT so many years ago, there was no internet to consult! Instead, we wrote to the province’s tourism office and then pored over glossy brochures, wondering if everything could possibly be as great as it looked in the photos. It was and we’ve made many return trips, each time finding new things to captivate us!

Canada’s second smallest province at just 5,283 sq km, what Nova Scotia lacks in land mass, she makes up for in charm and a wealth of attractions. More than 13,000 kms of coastline makes you want to kick off your sandals and wiggle your toes in the sand and build a sandcastle by the shore. Nova Scotia also has the highest tides in the world in the Bay of Fundy where 160 billion tons of salty seawater flows in and out, twice a day. At high tide, go tidal bore rafting, then, at low tide, stroll the ocean floor. 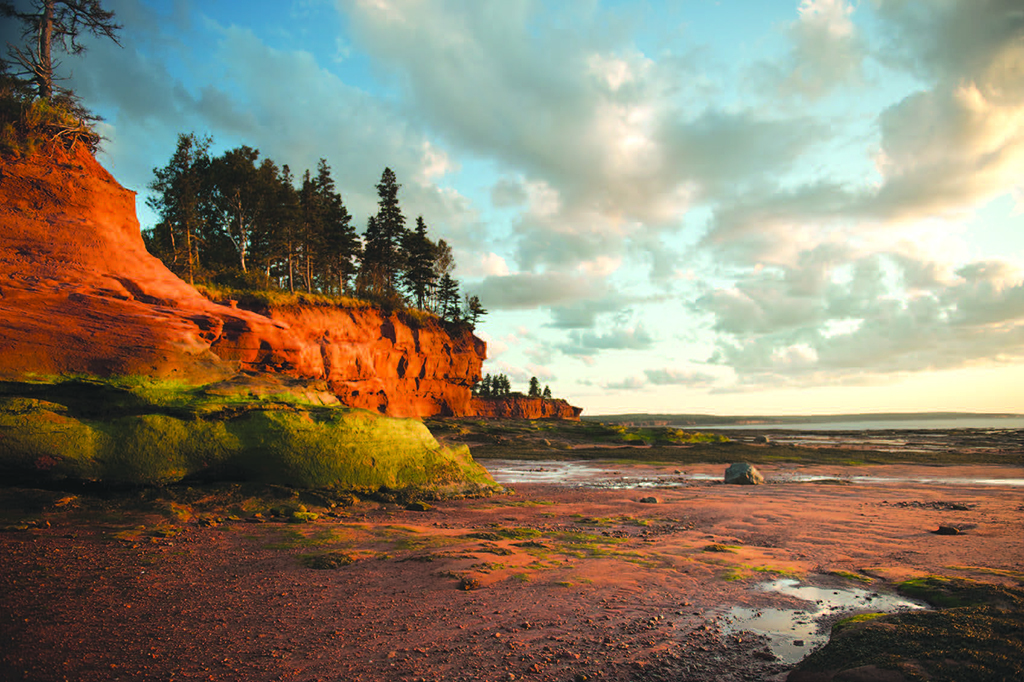 A wealth of UNESCO sites

Visit the Cliffs of Fundy UNESCO Global Geopark, driving 165 kms of Bay of Fundy shoreline. Hike, sea kayak, swim, tour museums and lighthouses and enjoy scenery created by a rupturing of the earth more than 100 million years ago. There’s nothing like it anywhere in the world.

Old Town Lunenburg and the Big Boat Shed, a part of the Fisheries Museum of the Atlantic, celebrates Nova Scotia’s long and proud history of shipbuilding, while a visit to the Joggins Fossil Cliffs’ extensive collection of specimens and exhibits, showcases the wonders of the Coal Age, when the area was a lush prehistoric forest. 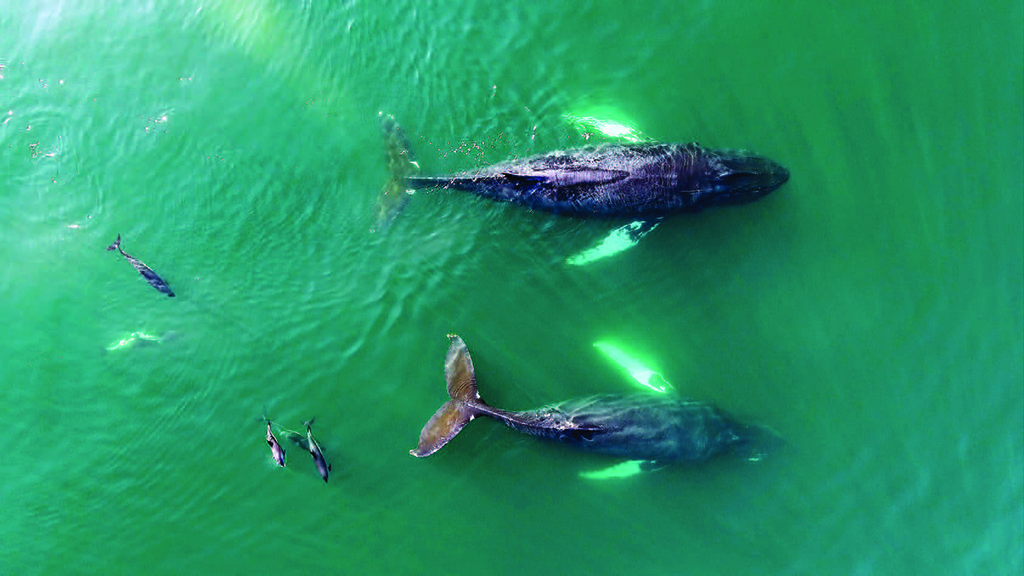 The Bras d’Or Lake UNESCO Biosphere Reserve celebrates diversity of all kinds in the heart of Cape Breton Island. There, the combination of salt and fresh water creates gentle tides that lap against hundreds of small beaches and secluded coves where marine and bird life such as grey seals and bald eagles flourish. Home to five Mi’kmaw First Nation communities, as well as the descendants of early French, Scottish, and English settlers, the local people keep their ancestors culture’ alive.

The Southwest Nova Biosphere Reserve has more than 1.5 million hectares of coastline and inland areas ideal for hiking and paddling. Learn about over 10,000 years of Mi’kmaw First Nation history and visit the “core protected area” which encompasses not only Kejimkujik National Park and National Historic Site, the Dark Sky Preserve and Starlight Zone, and the Tobeatic Wilderness Area.

The nearby Atlantic coast beaches, rocky headlands, North Mountain, the mighty tides of the Bay of Fundy, and pastoral Annapolis Valley are all in the Biosphere “Zone of Cooperation.”

The final UNESCO site is Grand Pre in the stunning Bay of Fundy & Annapolis Valley region, a 13 sq-km site that includes acres of tended farmland illustrating the dyke system built by 17th century Acadian settlers who reclaimed land from the sea to make their home. The area inspired American poet Henry Wadsworth Longfellow to write the poem Evangeline: A Tale of Acadie so have a read, then visit the Grand Pré National Historic Site to learn about the Acadian Deportation. 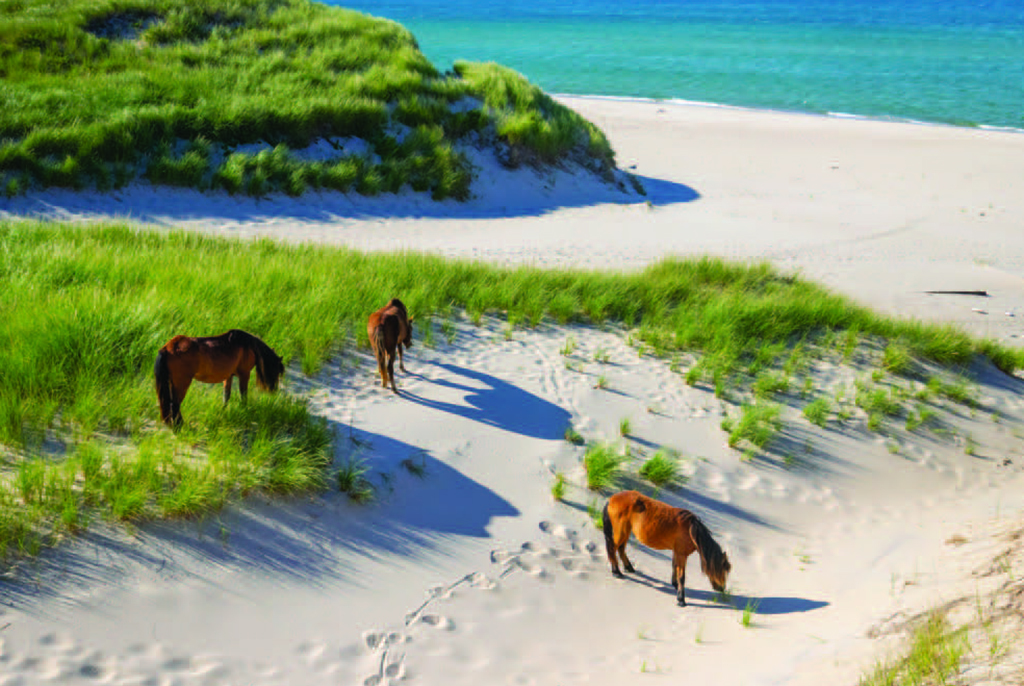 After visiting the UNESCO sites, explore the Halifax Defence Complex, five important National Historic Sites that each played a role in protecting the city from the invaders of centuries past: Halifax Citadel, Fort McNab, Prince of Wales Tower, York Redoubt and Georges Island.

Visit all five but be sure to start with the newest in the collection – Georges Island, in the Halifax Harbor, which served at various times as a prison and an Acadian internment camp. Rent a kayak and paddle over or enjoy a shuttle boat ride. Then, try a guided tour of the Halifax Harbour on the all-new, eco-friendly electric boat now silently gliding through the waves.

While in Halifax, treat yourself to a donair – the city’s official food – and visit one of the many welcoming pubs and bars. Halifax has more bars per capita than any other city in Canada!

Love watery adventures? There’s no better place than Nova Scotia. Try a two-day/two-night sailing adventure from St. Peter’s and sail on the Bras d’Or Lake. At night, you’ll sleep onboard your vessel in the lock at historic St. Peter’s Canal. Next day, the wind will fill your sails and your heart as you make your way through the tidal lock to challenge the Atlantic Ocean’s wild waves.

Speaking of wild waves, plan a day trip to famous Peggy’s Cove (main photo) to enjoy what is perhaps the most beautiful and certainly most photographed lighthouse in Canada from the newly constructed viewing deck.

Are whales your passion? There are 12 different species swimming in Nova Scotia’s waters, so hop aboard a charter cruise in mid-summer or fall when you’ll be most likely to spot them. Keep your eyes open in the Bay of Fundy – a couple of species spend their summers there, along with playful dolphins and seals. 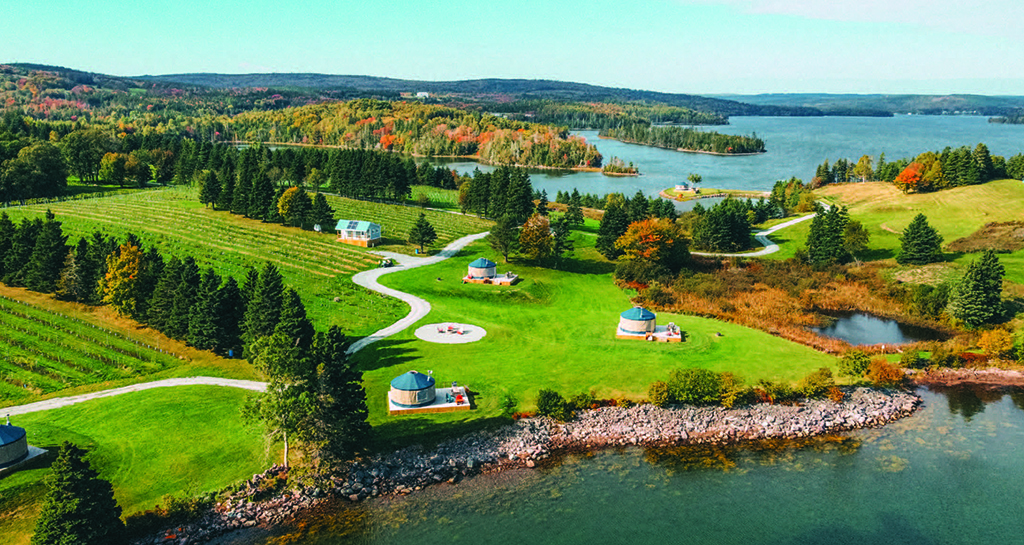 Nowhere else in the world

Travel is all about unique places and creatures. A helicopter flight to Sable Island will not only introduce you to beautiful horses living completely in the wild but also to the world’s largest grey seal breeding colony and birds, plants and insects that exist nowhere else in the world. This remote Parks Canada protected area can only be reached for day trips by boat or air, weather permitting, and only during a short time slot – from June-October. Enjoy a three-hour round-trip helicopter flight and a three-night stay at the Fox Harb’r Resort, which also offers world-class golf and an outstanding spa.

You could spend an entire season experiencing the province’s most exciting golf courses! Nova Scotia has FIVE courses making the cut in the Top 59 best public golf courses in Canada in 2021 by ScoreGolf Magazine! Three of the courses ranked in the Top 5 with Cabot Cliffs taking the top spot: 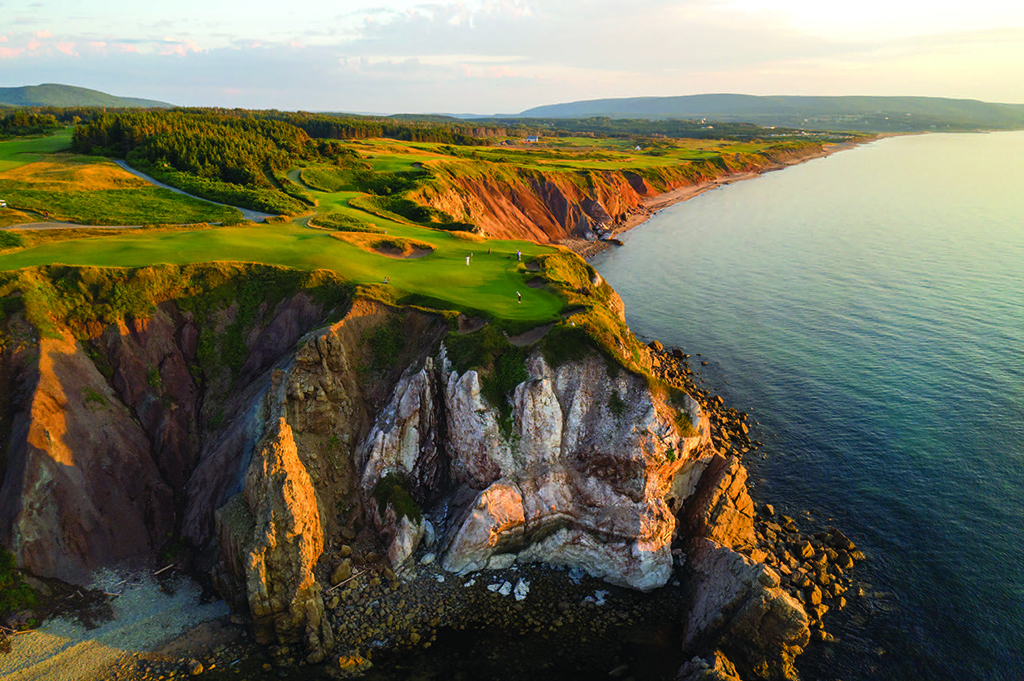 You’ll find the world’s most delicious seafood in Nova Scotia! Each year, 50,000 tons of lovely lobsters are harvested from Nova Scotian waters and some must be destined for your plate. Real crustacean lovers should take the Oak Island Legends and Lobster Experience, while fans of the show The Curse of Oak Island will be fascinated by a Salty Dog Sea Tour. The captain will give the scoop on family curses and hidden treasure, then you’ll make lobster appetizers on shore with the chef. Try stand up paddle boarding while your seafood dinner is prepared right there on the beach. Still longing for lobster? The Lobster Trail guide lists the best places to gnaw claws across the province.

To enhance your meals, try some of the many great wines produced by Nova Scotia’s 18 wineries. Rosé, white, red, sparkling, icewine… you’ll love them all… but one thing is a must – a glass of Tidal Bay, the province’s signature sip. For something a little stronger, visit the Citadel in Halifax to sample gin, whisky and rum, made from original Scottish highlanders’ recipes. So you don’t miss a tipple, consult the Good Cheer Trail’s list of Nova Scotia’s best wineries, craft breweries, cideries and distilleries. 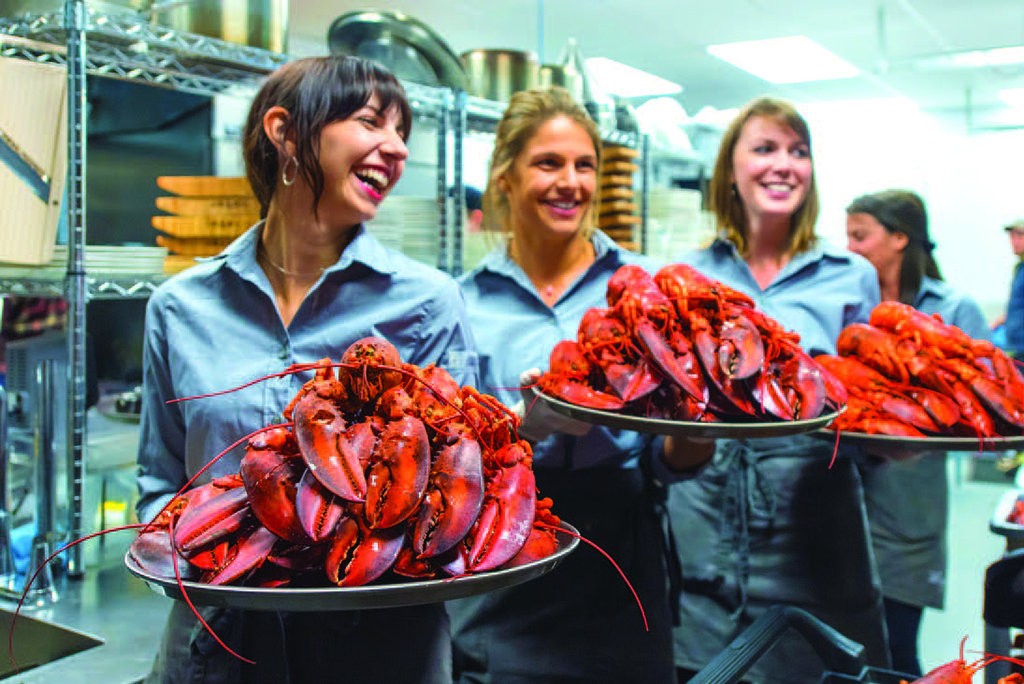 We’ve talked about having a donair in Halifax and visiting the Citadel, but there are other fantastic treats awaiting you in the province’s capital. Take a local foodies city tour and try Drift, the new restaurant in the impressive Queen’s Marque complex, featuring the food stylings of Chef Anthony Walsh, formerly of Canoe in Toronto.

Visit Peace by Chocolate run by the Hadhad family – chocolatiers from Damascus, Syria who lost their home, business and country to war. Arriving in Nova Scotia as refugees, they rebuilt their chocolate business in Antigonish and recently opened a new Halifax flagship store.

For something really exciting, book a foraging adventure with Gourmet by Nature, a culinary-focused adventure experience near Port Williams. Discover delicious wild ingredients in the lush Nova Scotia landscape while Chef Sean Laceby teaches you to cook your meal over an outdoor fire, butcher wild game or tap maple trees to make syrup. This spectacular outdoor dining experience is unforgettable! Nova Scotia has a style of accommodation to suit every visitor. Love luxury? Treat yourself to the Muir, a grand new Marriott Autograph Collection Hotel in Halifax’s Queen’s Marque. Want something boho? Book a funky room at the Marmalade Motel in Port Dufferin. Love outdoorsy experiences, but want a few creature comforts? Try glamping in the new domed spaces at the Sissiboo River Retreat or the Ôasis pods in Kejimkujik National Park and National Historic Site. Tempted by a treehouse? A cozy spot is waiting for you at White Point Beach Resort. Yearning for a yurt? Guysborough’s Authentic Seacoast Company has the perfect spot, or maybe you’d like to nod off while gazing over vineyards at the Inn at the Winery at Grand Pré. You could even hit the road in a luxury camper from NOMAD Happy Campers. The choice is yours.

Wherever you stay and whatever you do, one thing is certain – Nova Scotia will touch your heart and your imagination. Her rugged shores, blue waters and welcoming people will call you to return – and you will. Visit novascotia.com to plan your Nova Scotia getaway.

The Maritimes: When You Must Go Down to the Sea Again – A Photo Essay