FOR A MAN WHO IS behind a string of successful ventures including airlines, hotels, and even space ships, one would think that a cruise line was just Sir Richard Branson’s next logical travel conquest. In truth, launching Virgin Voyages has been his dream since he was in his 20s.

Born out of the desire to convince himself into cruising, Branson’s goal in designing Virgin Voyages was to bring about an “epic sea change,” reinventing the standard cruise concepts and bringing in fresh ideas. This resulted in an adults-only (18+) brand with a casual dress code, hip hang-outs, and no buffets.

The Virgin difference starts with the cruise lingo. Passengers are called ‘sailors’. Sailors staying in a suite are ‘rock stars’. Excursions are ‘shore things’. Cheeky names and sayings are used everywhere, making ‘ship’ happen as you’ve never seen it before. 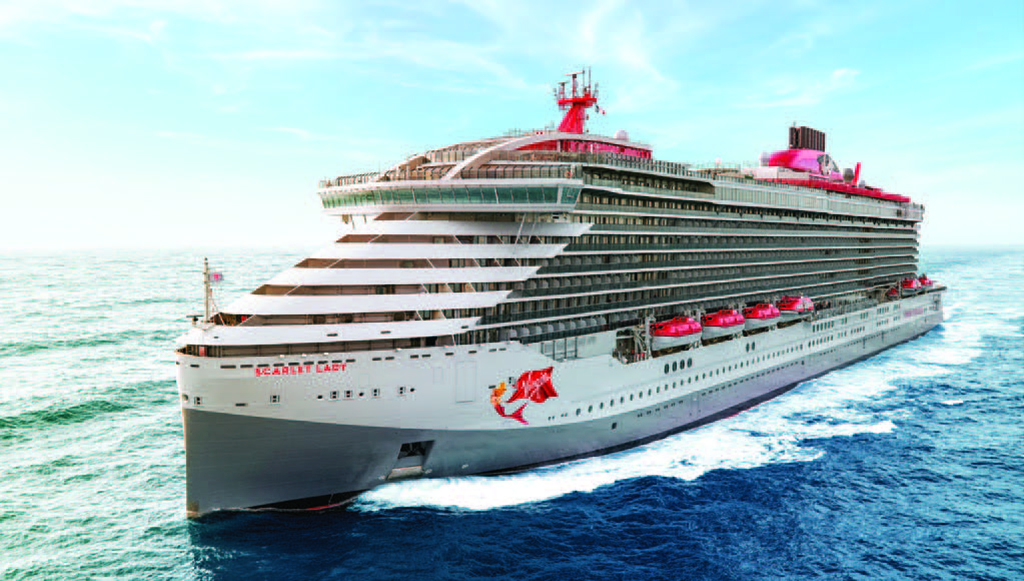 Scarlet Lady is 110,000 gross registered tonnes with a capacity for 2,770 sailors and 1,160 crew. Her exterior sports the trademark Virgin red hue and logo, and her bow is adorned with the ship’s namesake mermaid brandishing the Virgin flag.

Her spaces and experiences have been designed to capture the millennial market. She exudes a club-like feel, with DJs spinning tunes by the pools and upbeat music in the lounges. Large conversation areas and an extensive wellness program cater to a demographic that is both social and active. Built into her design are also plenty of photo ops for selfies and group shots, and strong Wi-Fi ensures there is always enough bandwidth to share those social media-worthy moments.

A smartphone is almost an extension of a millennial’s hand – and most of us for that matter – and as such, sailors navigate their cruise journey by way of the Virgin Voyages app. It is used to make dinner, entertainment, and shore things reservations. The ship’s daily program is also housed on the app, making the ship announcement-free and paperless, which is another smart move. 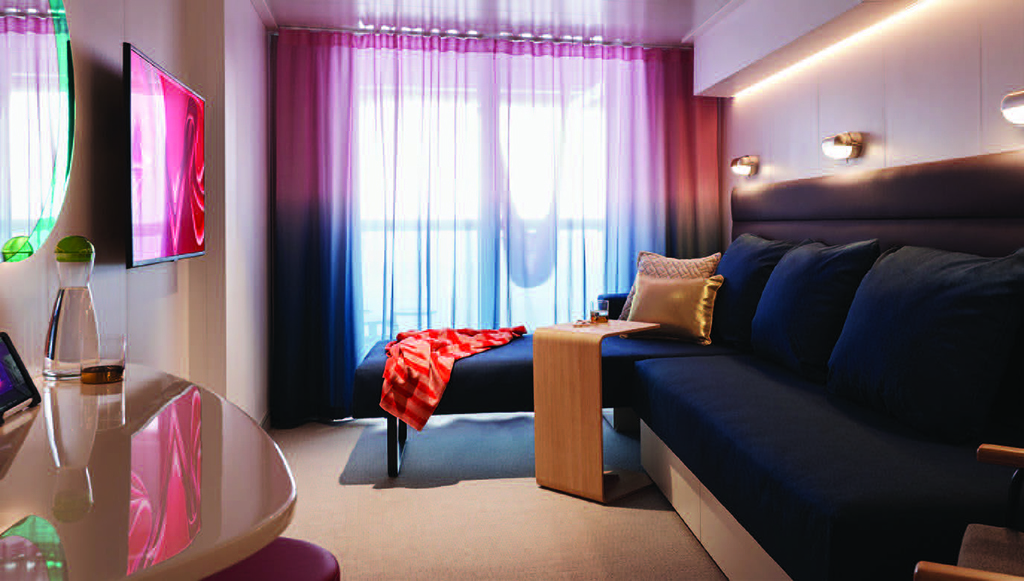 Innovations continue in Scarlet Lady’s accommodations. The transformable seabed can be made into a sofa by day that is much more conducive to lounging or socializing with friends. Trendy features such as mood matching lights, music selection, and automatic curtains are controlled through the in-room tablet.

Although there is only a once-per-day stateroom service, fresh towels, water, and ice can be ordered any time at the touch of the tablet.

Scarlet Lady’s suites are dubbed RockStar Quarters, with some being outfitted with guitars and a music room. These lavish accommodations come with extra rock-star privileges such as private transfers to and from the ship, a complimentary bar, a dedicated concierge, access to the thermal suite at the spa, and the elegant private outdoor lounging area called Richard’s Rooftop.

Overcoming the objection that cruising is too much of a structured and dressy affair, Virgin offers an eat-when-you-want, wear-what-you-want concept. Flip flops, sweats, and shorts are welcomed at all times, even at dinner; however, unlike the casual dress code, the dining experience is 100 percent upscale. With over 20 complimentary eateries, Virgin offers exceptional venues from a traditional steakhouse, Italian, and Mexican to vegan-forward, a test kitchen, and the industry’s first Korean barbeque. Every meal is delivered with creative presentation, crafted with high-quality ingredients, and complemented with a taste that rivals any five-star restaurant ashore.

Designed well before the pandemic made self-serve buffets a thing of the past – Scarlet Lady also features a series of eateries with table service housed at The Galley. In addition to standard burgers, salads, and sweets, there is an all-day diner, sandwiches, paninis, flatbreads, sushi, ramen, and tacos. Call it a premium food court if you will, where menus are on scannable QR codes and a staff member will take your order and deliver your choices to your table. In a clear departure from Broadway tributes and stand-up comedians, Virgin collaborated with talented artists such as Tony-nominated Sam Pinkleton and Montreal’s 7 Fingers to create a line-up of high-octane entertainment. This includes out-of-the-box

Happening once on every cruise is Scarlet Night, where sailors are encouraged to dress in head-to-toe red, or “a splash of” for those who aren’t so inclined. A series of pop-up performances, a vibrant pool party, and other surprises are in store during this not-to-miss evening.

A Caribbean voyage wouldn’t be complete without a stop at Virgin’s private beach. Located on North Bimini Island in the Bahamas, the Beach Club at Bimini is a short tram ride from the pier. A large free-form pool with a swim-up bar, hammocks in the sand, private cabanas for rent, and a gorgeous sandy beach (and sandy bottom) provide a day of respite in the sun. For active sailors, yoga on the beach – or on a stand-up paddleboard – group games, and optional excursions to explore Bimini Island are good options. Lunch at the Beach Club is elevated as well – no burgers or fries here! Watermelon jicama salad, banana leaf steamed red snapper, and Indian curries are all refreshingly creative and delicious.

With other industry firsts such as Squid Ink – the first tattoo parlour at sea (which was busy during our voyage), the Voyage Vinyl record shop, and Dry Dock blowout bar, it is clear that Virgin attracts the next generation of cruisers who are looking for something different from their grandmother’s cruise line. Is it right for you? As long as you are young-at-heart, open-minded, and enjoy the hip and off-beat shipboard experiences, then yes! Having said that, we should also point out that Virgin isn’t a party cruise. Although music and entertainment are in the company’s DNA, the atmosphere is still classy, complemented by superb dining and service.

His dream realized, Branson is already banking on Virgin Voyages’ success. Scarlet Lady already has a sister Valiant Lady launched in April, and will welcome her next sister Resilient Lady this August, with an as-yet-unnamed fourth sibling to be

delivered in 2023. For now, the ladyships will ply the waters of Europe, the Caribbean, and will venture into the Far East and Australia in the fall of 2023. We have no doubt that Virgin Voyages will bring their epic sea change to all corners of the globe in due time.