Yorkshire and the Lake District: An Elegant Journey into the Past

When my sister and I arrived at the welcome dinner for our Albion Journeys adventure, we found our soon-to-be tour group friends already comparing notes. All 18 had arrived with the same goal – to explore the stately homes and gardens of Yorkshire and the Lake District and immerse themselves in the glories of the past.

They’d come to the right place. Albion Journeys specializes in carefully curated itineraries for small groups of discerning travellers (there were just 18 of us) that explore important historical districts and sites – often when they are celebrating special events or anniversaries. As a result, their tours change often so when you see a lineup that appeals, you’re wise to book quickly.

The exclusive Albion Journeys tour, “A Journey Through Glorious Yorkshire and the Lake District” we were doing offered everything an anglophile’s heart could desire. Over the next eight days, we’d enjoy exclusive, unhurried tours of some of the most exquisite properties in England as well as uninterrupted opportunities to wander lush English gardens – many designed by such landscape icons as Capability Brown – all at the height of the blossom season. 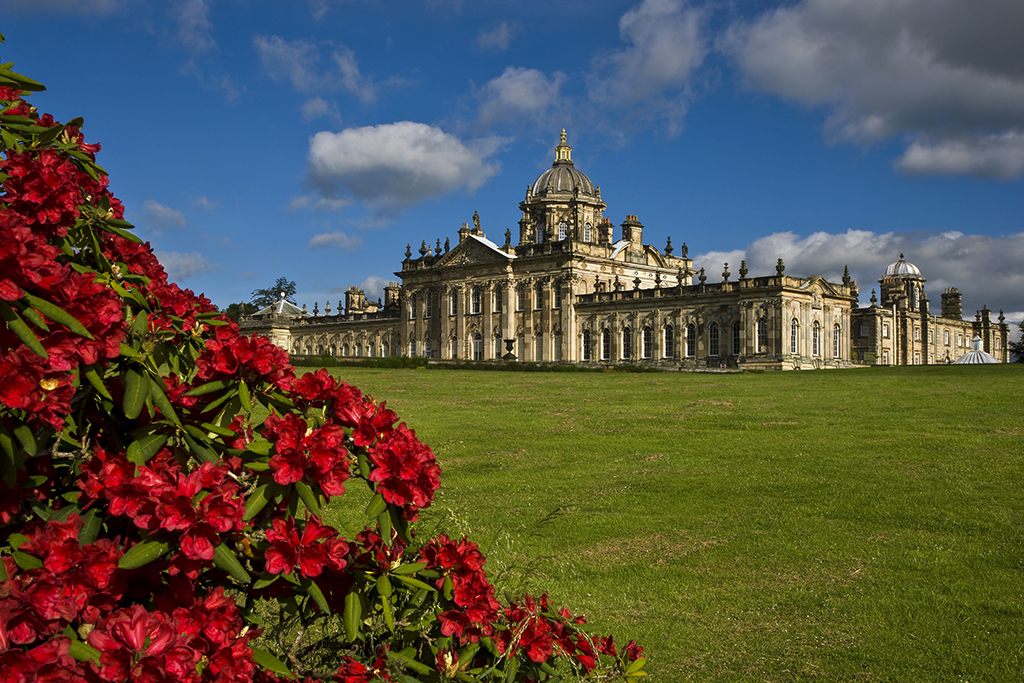 For many, the high point of the Yorkshire tour was our private glimpse into Castle Howard in all its 'Brideshead Revisited' glory. Photo courtesy of Castle Howard/Mike Kipling.

Designed for travellers with a passion for history, architecture, gardening and design, this particular Albion itinerary had topped the bucket list of many of the group members and no day disappointed. At every turn, there were lovely treats ranging from beautiful keepsake books to exclusive Albion totes in which to put them.

One of the great pleasures of a guided coach tour is not having to drive. Instead, with intrepid driver Les at the wheel and our well-informed tour director David manning the microphone, we rolled through the countryside, from one gorgeous stop to the next, free to gaze out the window at the endless acres of pastureland, picture-perfect sheep and rugged stone fences that must have taken a lifetime to build.

We began our explorations with Wentworth Woodhouse in South Yorkshire, listening as the docent explained that although now emptied of its once rich furnishings, in its heyday this beautiful home – Jacobean in one wing and Paladian in the other – often welcomed as many as 60 guests for weekend parties. You could almost imagine the hallways echoing with the laughter of the family and friends of the First Marquess of Rockingham, the original owner. 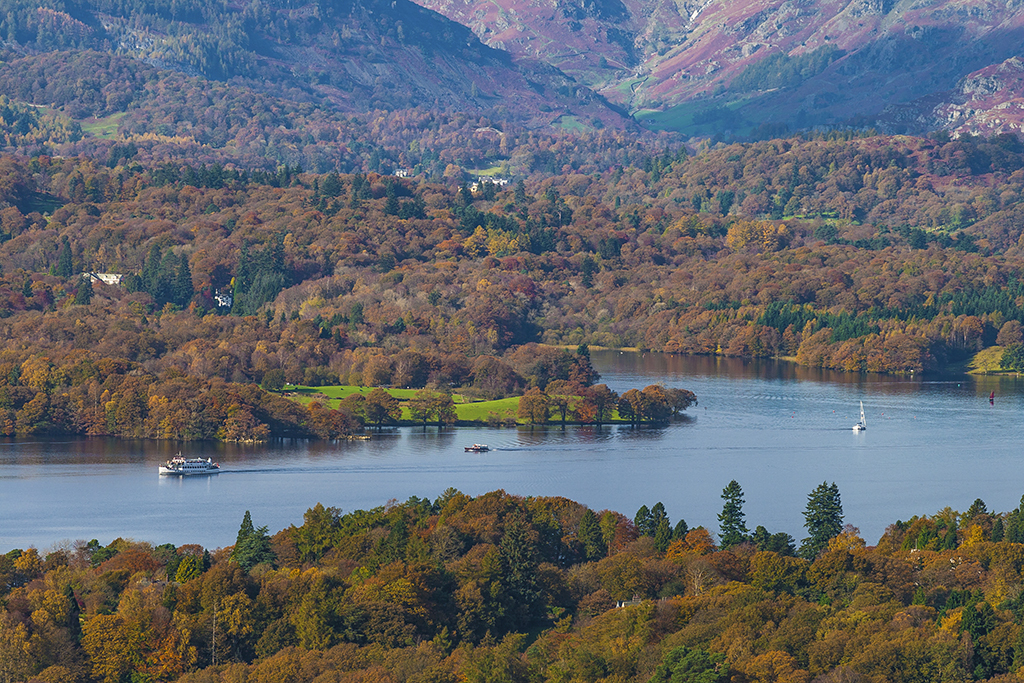 
Brodsworth Hall and its stunning gardens filled more happy Yorkshire hours, as did a walking tour of York, during which we ambled past the tip-tilted buildings of the Shambles, the old butcher’s district, feeling grateful that the bloody scents of the past were no longer with us.

Later, we had a great wander through York Minster, Europe’s largest gothic cathedral, housing the world’s biggest collection ofmedieval stained glass. The biblical stories and dire warnings for sinners contained in those shimmering windows were fascinating.

Still in a pious mood, we visited the most extensive monastic ruin in Great Britain – Fountains Abbey, near Ripon in North Yorkshire. Standing among towering stone walls, smoothed by the passage of centuries, we pictured the original 13 Benedictine monks taken to live there, observing their vows of chastity, obedience and poverty and withdrawing from the world to worship. Later, we wandered the banks of the nearby water garden, watched the ducks and swans among the lily pads and then enjoyed a quiet lunch by the lake.

For many in the group, the highpoint of the Yorkshire tour was our private glimpse into Castle Howard, near York, in all its Brideshead Revisited glory. Hallways filled with Greek and Roman statuary, walls covered in priceless paintings and some of the finest furnishings to be found anywhere in the world, this was the perfect property to immortalize Evelyn Waugh’s famous novel. Just in case it had been a while since we’d watched the 2008 movie, filmed in spectacular Castle Howard and its gardens, there was an entire room devoted to showcasing stills from the filming. It was an emotional visit and my guess is that more than a few teddy bears, like the one so important to the handsome young aristocrat Sebastian Flyte, were purchased in the swanky gift shop that day. 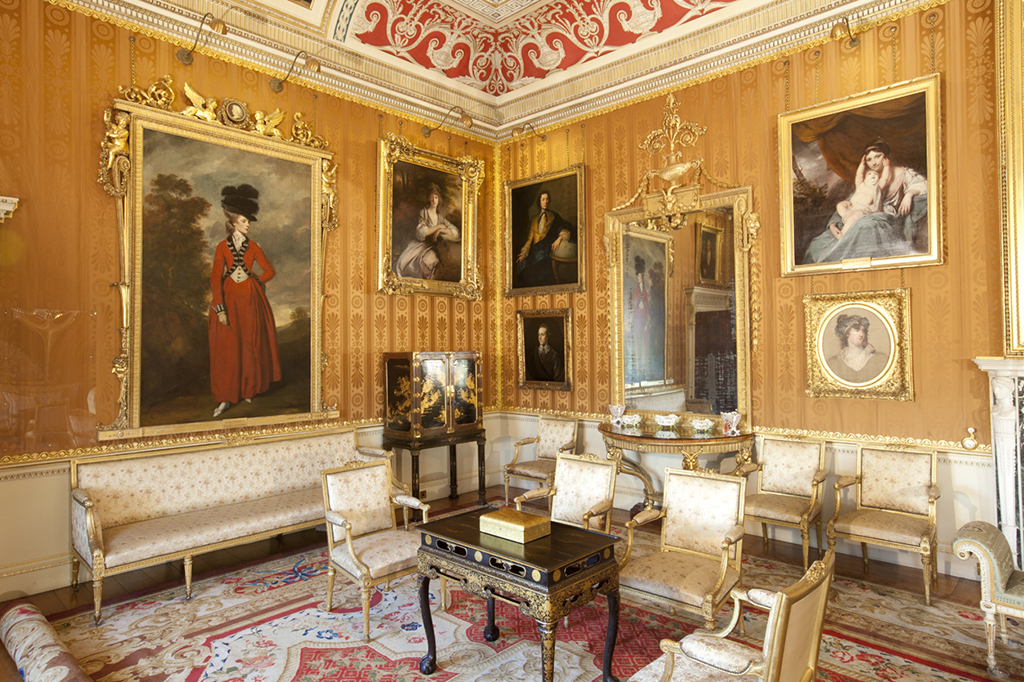 The Cinnamon Drawing Room at Harewood House, with its portrait of the scandalous Seymour Dorothy Fleming. Photo courtesy of Harewood House Trust.

Nights in Yorkshire were spent at Middlethorpe Hall, a William III country house built in 1699, and once the home of famous diarist, Lady Mary Wortley Montagu. This house was so regal that it was easy to pretend we were guests at some elegant, long-ago house party ourselves – a type of atmosphere typical of Albion Journeys’ hotel choices. We swam at the spa pool, then dressed for dinner, taking extra care to make sure we felt elegant enough to deserve the gourmet meals the chef provided.

After our Yorkshire adventures, it seemed only appropriate to make our arrival in the Lake District by water, so we sailed across Lake Windermere on a steamer called the Teal, sitting on the top deck, our backs against the wheelhouse, warm in the late afternoon sun. The Lakeside Hotel, our elegant new four-star luxury headquarters, was so close to the docks that we simply walked to the lobby, with the faithful Les bringing our bags in the coach behind us. With ducks bobbing for their dinner at the shoreline and a small flotilla of sailboats moored nearby, the atmosphere was tranquil and serene.

More fascinating homes awaited in the Lake District, but they offered a very different taste of history. Brantwood House, home of John Ruskin, one of the moving forces behind social reform and the arts and crafts movement in England – was as much about the history of its remarkable owner as it was about the architecture of the buildings. The home of his equally noteworthy neighbour, poet William Wordsworth, offered another, very different look at life in the Lake District as did a visit to the office of Beatrix Potter’s husband, which now houses a unique collection of her beautiful animal fantasy drawings. Those, along with rare letters and documents provide insights into the life of a woman who was not only a great children’s author but also a social reformer in her own right. 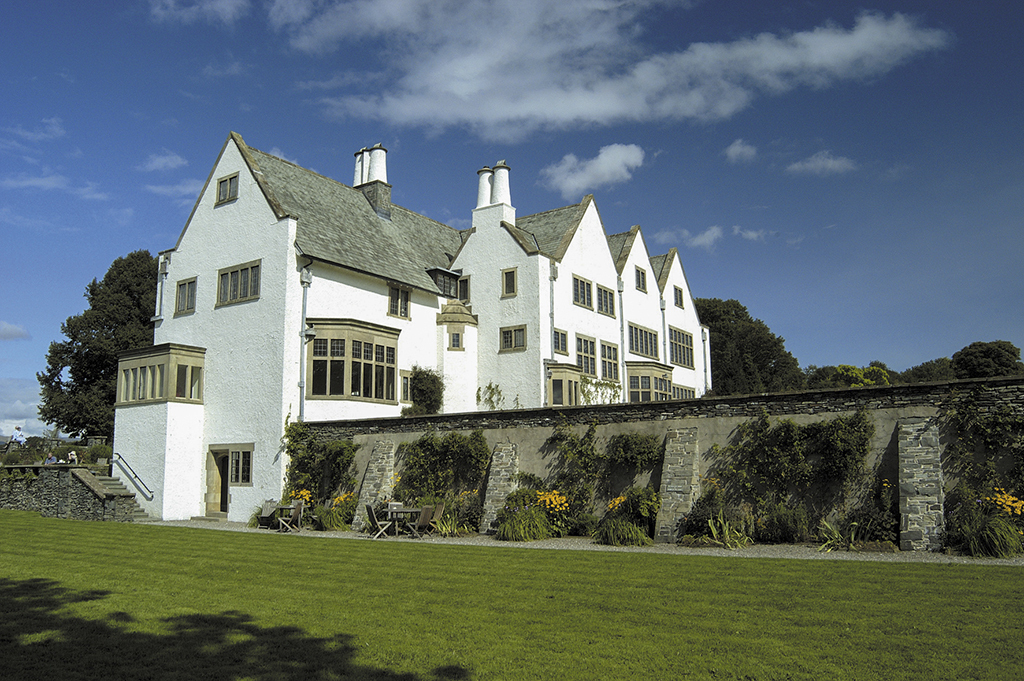 Although my favourite stately home was undoubtedly Blackwell, designed by the famous Baillie Scott and perhaps the best example of the arts and crafts style to be found anywhere in the world, with its gorgeous hand-carvings, exquisite pieced hessian wall coverings, and spectacular white drawing room, the real ‘aha’ moment of the trip came far earlier for me, while we were still in Yorkshire.

When I strolled through the imposing entrance to Harewood House, one of the most impressive properties of all, I was fully expecting to see a spectacular collection of Chippendale furniture, along with walls of museum-quality paintings. What I wasn’t expecting to discover, in one of the enormous portraits, was a long-lost relative with a wonderfully scandalous reputation – Seymour Dorothy Fleming.

Dressed in a scarlet jacket and skirt – very appropriate, I soon discovered – she gazed from her ornate picture frame with knowing eyes. Married to Sir Richard Worsley, 7th Baronet of Appuldurcombe House in the Isle of Wight, Lady Seymour, the guide explained, hadn’t let the bonds of matrimony bind her very tightly. She’d enjoyed a string of 27 lovers until her husband finally filed for divorce, creating the ‘criminal conversation’ scandal of their era. Rather than slinking away in shame, Lady Seymour Dorothy instead proved that Sir Richard had promoted her exploits, once even hoisting a friend onto his shoulders to get a better view of her disrobing in the bathhouse. The judge wisely ruled in the Lady’s favour, enabling her to enjoy more romances until her final marriage – to a young man 20 years her junior. She died as she’d lived – with style and abandon – so, completely without proof of any actual blood relationship, I welcomed her to our branch of the Fleming clan on sight!

Discovering fascinating stories is just one part of what made the Albion tour wonderful. Hot scones, clotted cream, jams and other fabulous tea cakes made appearances in the tea rooms of almost every house – and I’m afraid very few of us ever said no. One evening, a noted local scholar joined us for a pre-dinner lecture that encapsulated everything we needed to know to understand the history, geography and even the geology of the Lake District, leaving us feeling far more clever than we’d been hours before!

For lovers of all things British – and historic – this was the ultimate tour and immersion into a past so elegant and ultimately so enticing, that I’m sure more than a few of us would have been happy never to have returned.

For complete information contact your travel agent or visit www.albionjourneys.com.

Adventurous Alaska in the Lap of Seabourn Luxury