I'm not a morning person. Most days, the sun rises on its own – with no supervision from me. But on the morning of November 22nd last year I bolted out of bed, raced up six flights of stairs to the elegant cabanas of The Retreat on Deck 11 of the ms Zuiderdam to be in a prime position to watch our journey through the locks of the Panama Canal.

It would, I was sure, be the highlight of a fantastic cruise that included everything from a day at Half Moon Cay, Holland America's private island paradise in the Bahamas, to a snorkeling safari in windy but wonderful Aruba. We’d also spent a fascinating morning learning everything we’d never imagined about ostrich ranching in Curacao, laughed and joked and bargained with the street vendors in the old walled city in Cartagena, and were still looking forward to an up-close-and-personal monkey-watching adventure on the islands of Gatun Lake, Panama, and a morning of zip-lining over the treetops in the Costa Rican rain forest. 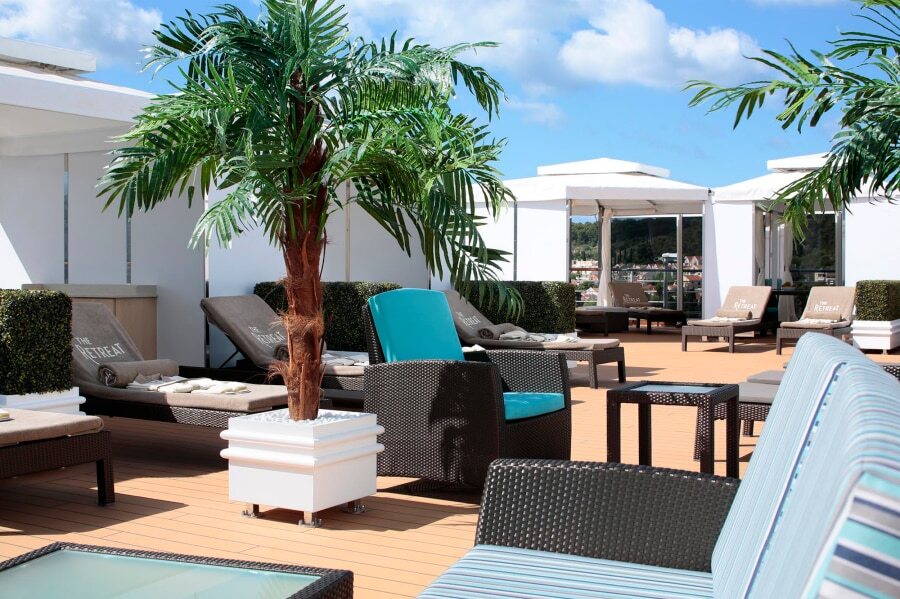 In addition to great shore excursions, our time on the ship had offered four sea days filled with pool lolling time, onboard movies viewed from the plush seats of the Screening Room, cooking classes in the new America's Test Kitchen facility, digital camera sessions, fitness classes and plenty of opportunities for shameless self-indulgence.

We'd dined royally at all the specialty restaurants, enjoying succulent steak and lamb chops at the elegant Pinnacle Grill, spicy sun-dried tomato and sausage rigatoni at Canaletto and snapper at Rudi's Sel De Mer, the one-night-per-cruise culinary masterpiece of Chef Rudi Sodamin. The Main Dining Room had also been a great choice both on the nights when we dined in romantic solitude and when we joined chatty tables of equally happy guests. Casual poolside lunches of grilled chicken, hot-from-the-oven pizza, Asian grilled tuna salad bowls, or a range of other treats from the Dive-In Grill and Lido Market had also made for great, healthy dining.

To work off the calories, we took full advantage of Holland America's 'music walk' – a completely new series of entertainment venues just added to the ms Zuiderdam, having originally debuted on the gorgeous ms Koningsdam. We loved it all: Lincoln Center, an elegant small theater featuring brief but lovely classical music performances several times each evening; Billboard on Board - a sing-along dueling pianos bar that offered three different themed sets each night and had guests singing their hearts out; and our big favorite, BB King Blues Club, where an eight-piece stage band pumped out blues, rock, Motown and more, packing the house for three nightly sets.

The Main Stage shows were a mix of big song and dance productions, witty comedians, and innovative magicians but the hands-down hit of the cruise was the ultra-innovative Island Magic, a group of wildly talented steel drum musicians from Trinidad who play classical music by ear - and mesmerize entire ships with their sound. With that kind of entertainment tempting us, it was rare for our heads to hit the pillows before midnight – any night! 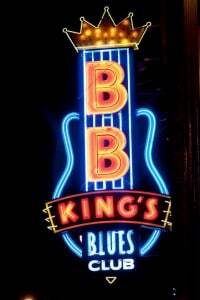 We were lucky to be aboard the ms Zuiderdam following her fall 2017 dry dock rejuvenation in Freeport, Bahamas. Part of a $300 million investment by Holland America in updating not only suites and staterooms, but also dining and entertainment venues across its fleet of Signature-, Vista- and R-Class ships, the ms Zuiderdam now has a cool new vibe.

Already alive with impressive touches like the stunning Waterford crystal seahorse dominating the atrium and the elegant art deco elevator doors on every floor, the well-designed ship has been refreshed throughout. From fresh carpeting, tile and wall treatments, to redesigned public spaces like the Music Walk and Crow’s Nest – a sunny combination library/coffee bistro/ casual entertainment venue – ms Zuiderdam is a ship reborn. In addition to new couches and mattresses, one of the most popular new stateroom features were highly interactive television systems that offer not only complimentary on-demand movies, television shows, news, cooking shows and more, but also constant access to the ship’s daily program, shipboard restaurant information, spa services and billing information. With their ship looking her best, the staff and crew were understandably proud.Said Hotel Director Darren Lewis, “The Zuiderdam has a soul…and you feel it emanating from the staff.” 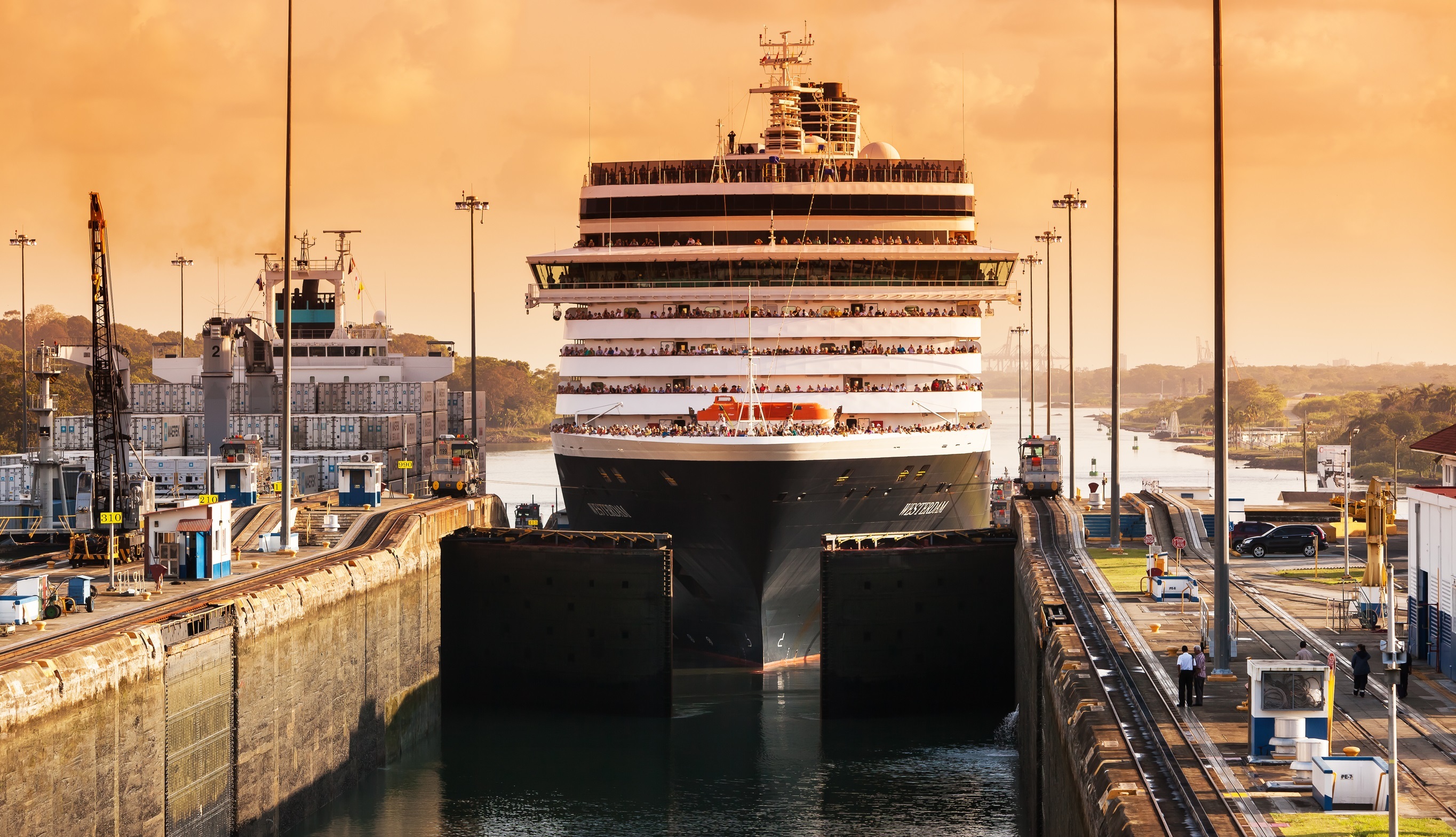 Topping off the dynamic itinerary and revitalized ship was the chance to sail into the Panama Canal. At 48 miles-long, this three-lift-lock system is able to raise and lower ships an incredible 85 feet, depositing them into a mid-point, man-made lake, and making it possible to sail from one ocean to another. A symbol of man’s unswerving dedication to a seemingly impossible cause, the Panama Canal project was begun with great enthusiasm by the famous French engineer Ferdinand de Lesseps who, in 1800 envisioned the creation of a sea-level passage. Disasters of every kind followed as de Lesseps attempted to fight the challenging landscape and the punishing climate, until finally abandoning the project in disgrace. It was not until 1914, after more than a century of struggle, that the Americans finally completed the Canal.

I hadn’t known much about the Canal’s history until I settled into the Zuiderdam’s Screening Room and became immersed in films that showed how this engineering wonder had been achieved at a terrible cost. Tens of thousands of lives – French, American and West Indian - were sacrificed in the building of the Canal – lives lost to explosions, rock slides, train derailments, malaria and the dreaded yellow fever.

Carved through impossibly dense jungle, in stifling heat and endless rain, the Canal’s construction destroyed one of France’s most brilliant engineers and outlasted two U.S. presidents. It’s a fearsome and fascinating place that changed the face of global travel forever. Through it, ships can glide from ocean to ocean in hours, rather than the days once required to sail around the tip of South America.

When the big morning came for our sailing of the Canal, we were determined not to miss a second. Because Holland America knows how to mark an occasion, the Canal passage was celebrated in style with extra early morning coffee ready on deck and large platters of ‘Panama buns’ – a sort of soft donut bursting with a creamy, orange filling that was a reward for an unnaturally early rising.

All around us in the drizzly morning waters were other ships – container vessels, tankers and tugs - all waiting their turn. Though certainly not a wild ride, our gentle three-part rise through the locks was stately and our final arrival in Gatun Lake felt like a celebration. As we slid into the quiet waters, cheers from a nearby oil tanker surprised us. At first, we couldn’t hear what they were shouting as they waved insistently from the deck of a ship flying the Panamanian flag. Whatever it was, they seemed very anxious to be heard over the throbbing of the engines. Puzzled, we waved back, straining to catch their words until finally, we got the message. They were shouting, “Welcome to the Panama Canal.”

Holland America Line to Restart Cruising from Greece in August 2021