DEPARTING DENAREAU and sailing into the blue, en route to Sacred Island in a catamaran, we find the welcoming committee ready for us. First is a school of playful dolphins, keeping pace off both the port and starboard sides. They frolic in the wake, flipping over and leaping clear out of the deep blue sea as if they know, by amping-up their spectacle, they’re starting our voyage strong. Then, the flying fish, like something from a tropical fantasy movie, buzz just above the waves.

And, finally, as we make the turn into a sheltered cove, the MV Fiji Princess surrounded by a crescent sweep of sandy beaches and green mountains, the sharks arrive. About a dozen of them. Black-tipped dorsal fins emerging from the lagoon, just circling the ship, as if to celebrate our arrival.

Fiji is filled with wonders. Situated deep in the South Pacific, far nearer to Australia than North America, it’s an archipelago of about 330 islands, only about a third of them inhabited. Here, coral reefs buzz with life. Waterfalls tumble into rushing rivers. Green mountains rise more than 4,000 feet. And people speak one of 300 dialects, all part of a rich and nuanced culture that dates back to the first human settlement here, way back in 3,500 BC. 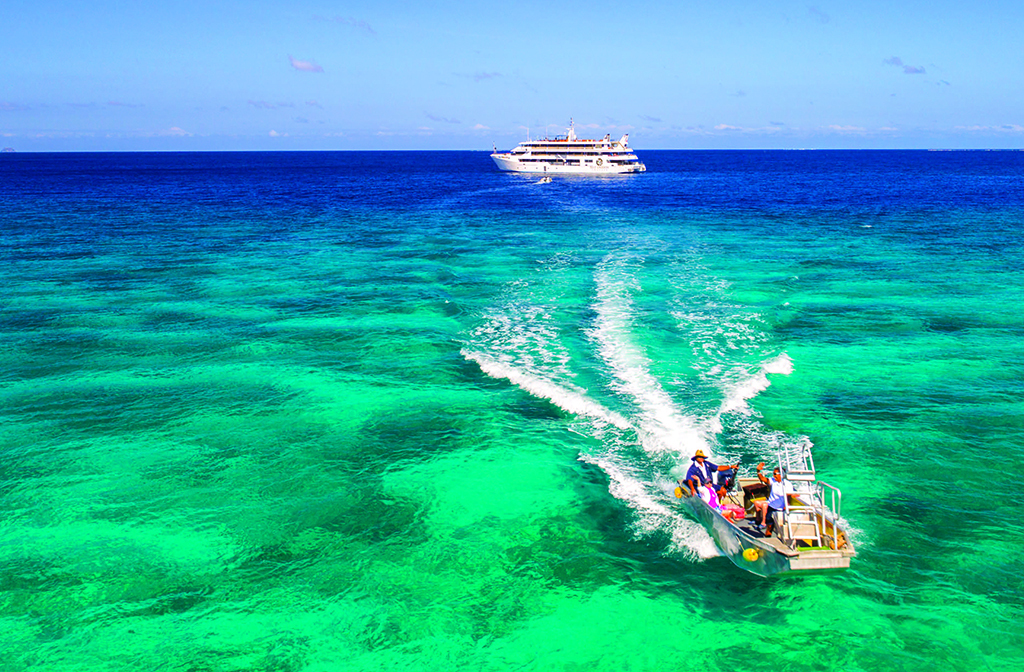 It was all off-limits to visitors until December of last year, when Fiji finally reopened to tourists. One of the first to experience it, I’m here for two weeks, exploring on both land and sea. The latter is part of a four-day voyage on Blue Lagoon Cruises, a local company that operates the Fiji Princess, a small ship with 34 staterooms, a small pool on the stern, and an expansive sundeck, perfect for sprawling out and enjoying the 360-degree view.

But first up, is a whole day at the beach. Blue Lagoon cruises for a maximum of four hours every day.

My itinerary wound through the Yasawas, a straight line of about 20 volcanic islands just off the coast of Viti Levu, the largest Fijian island, commonly known here as the “mainland.” On the second day, we arrive at the Blue Lagoon (near the spot where they filmed the Tom Hanks movie, Cast Away) on the small island of Nanuya Lailai, where the cruise line maintains a private beach.

The crew make a big show of the mooring. The captain positions the ship with its stern turned to the beach, and they take the lines across in a little boat, literally tying up the ship to a couple of coconut palms. And then, everyone jumps into the water to swim to the beach. The day stretches out, a long, dreamy moment in paradise.

People paddle around in kayaks and on stand-up paddleboards and pick up piña coladas at a makeshift bar the crew set up by the water. I grab some snorkel gear and swim off the beach to find huge mounds of coral, the whole area alive with damselfish and surgeonfish and sergeant majors, and thousands more I couldn’t identify. I’m the only one out there. On the way back, my pumping fins and general presence stir some moray eels, who give me a start when they move in the sand as I swim over them.

And after a day of relaxation, a close encounter with culture, as the lazy late afternoon fades into evening. One of the most beautiful things about visiting Fiji is the proximity of cultural experiences – Fijians are happy to share the ways they’ve survived and thrived on these remote islands for thousands of years. 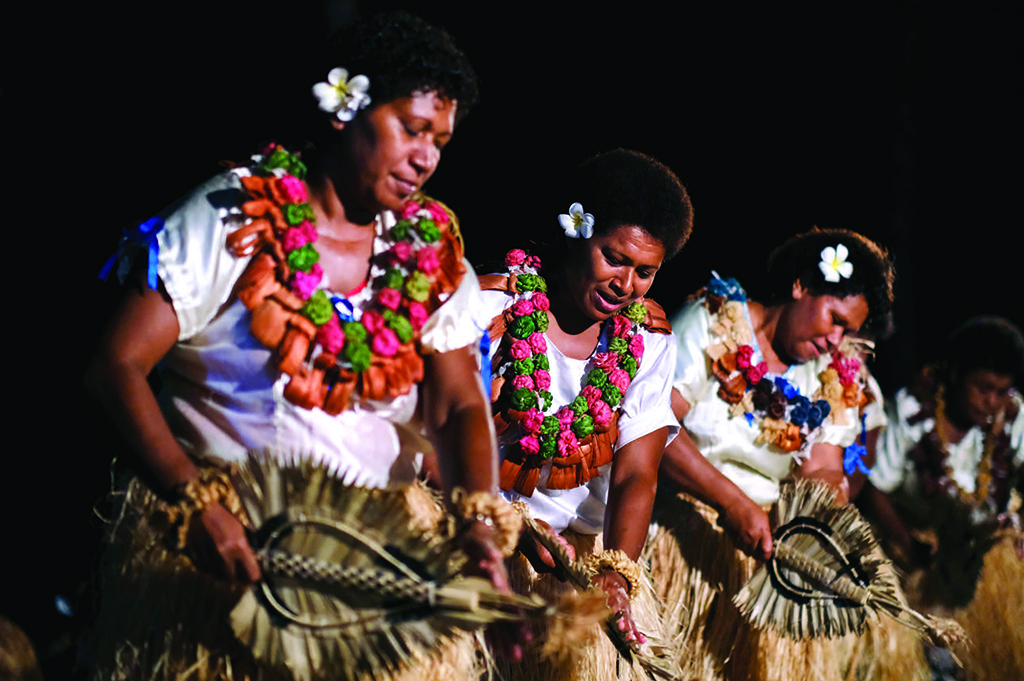 A large portion of the population still lives in the same villages as their ancestors, many generations back. People farm their own cassava and taro, they raise pigs and chickens and cows, and they fish in the rivers and the sea. They hold land communally, and live community-based lives, with both the resources – and the responsibilities – shared.

To truly experience it, you need to spend time away from the big resorts. Out here on Nanuya Lailai, the crew prepares dinner in a traditional lovo, blending pork and chicken and fish, and root vegetables, tied up in coconut palm leaves and buried in a pit to slow-cook for hours over hot coals.

Later, a group from a nearby village arrives to perform a meke. Dressed in traditional attire, their dances and songs tell their story, from war to love, and afterward we partake in a kava ceremony, drinking a root, harvested and dried and mixed with water, that is a bedrock of the culture. In Fiji, any significant event, from weddings to funerals, involves time around the kava bowl, and it’s a key element in community bonding.

I encounter the culture again and again, as I island-hop around the country. For example, at a small resort called Savasi on Vanua Levu, Fiji’s second-largest island, my stay involves a cooking lesson, making kokoda, pronounced ko-konda, a local ceviche. The chef explains that the fresh fish—today, yellow fin tuna—is marinated for two hours in lime juice. A guide named Eddie grinds a coconut and separates the miti (the milk), and we add it to the fish, along with red pepper, onion, coriander and other ingredients. 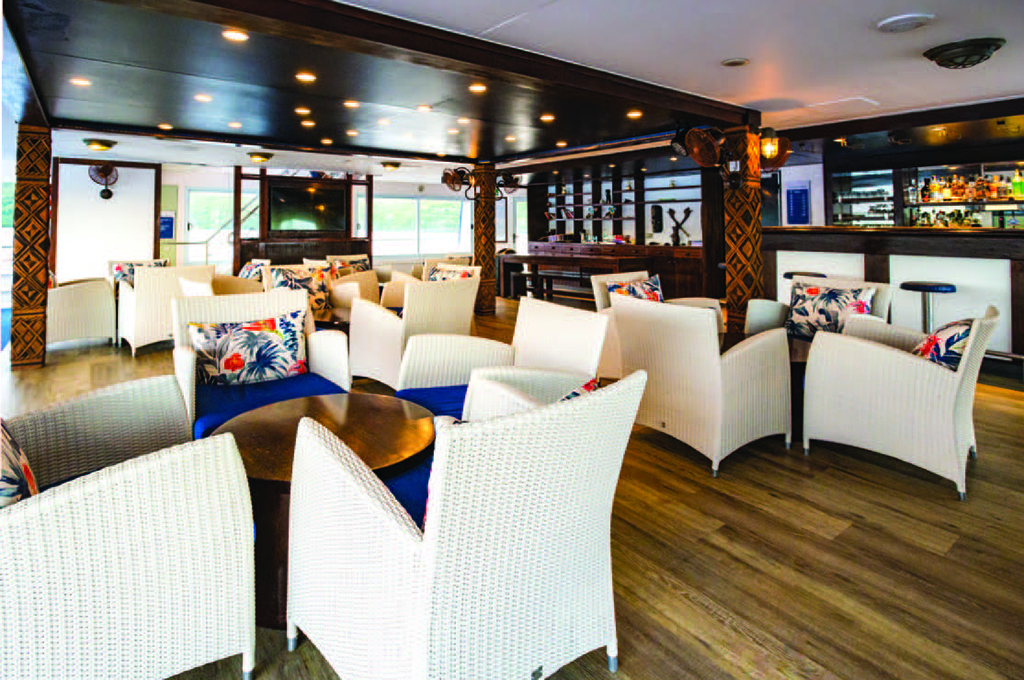 “We call the coconut palm the ‘tree of life,’” Eddie says, with a smile, adding that they use it for everything from making rope to scrubbing the floor. He also shows me how to make a basket from its leaves. “My first one,” he jokes, after creating the whole thing, weaving the leaves together, in less than fifteen minutes. The next day, he guides me on a tubing trip, cruising down a river, through the rainforest. We finish in a local village, and the kids rush to claim our tubes, joyfully playing with them while our small group enjoys a shower provided by a hot spring, the warm water piped from beneath the surface.

On my last day back on the Fiji Princess, I have a chat with Captain Jitoko Gonevakarua. Throughout the voyage, he’s been a character, snorkelling with the guests, shaking our hands and chatting us up at the captain’s dinner, fishing for his dinner with hand lines. A Fijian who grew up in a small village, he knows these waters and islands intimately. He says a cruise like this is the ultimate way to experience it all. “You change your beach every day,” he says. “Every morning, you wake up and you’re on a different island.”

It’s very true. Because just minutes later I’m off again, this time in a small boat sent by nearby Yasawa Island Resort. A new island, new village, new culture ahead, just one of the hundreds, here in Fiji. 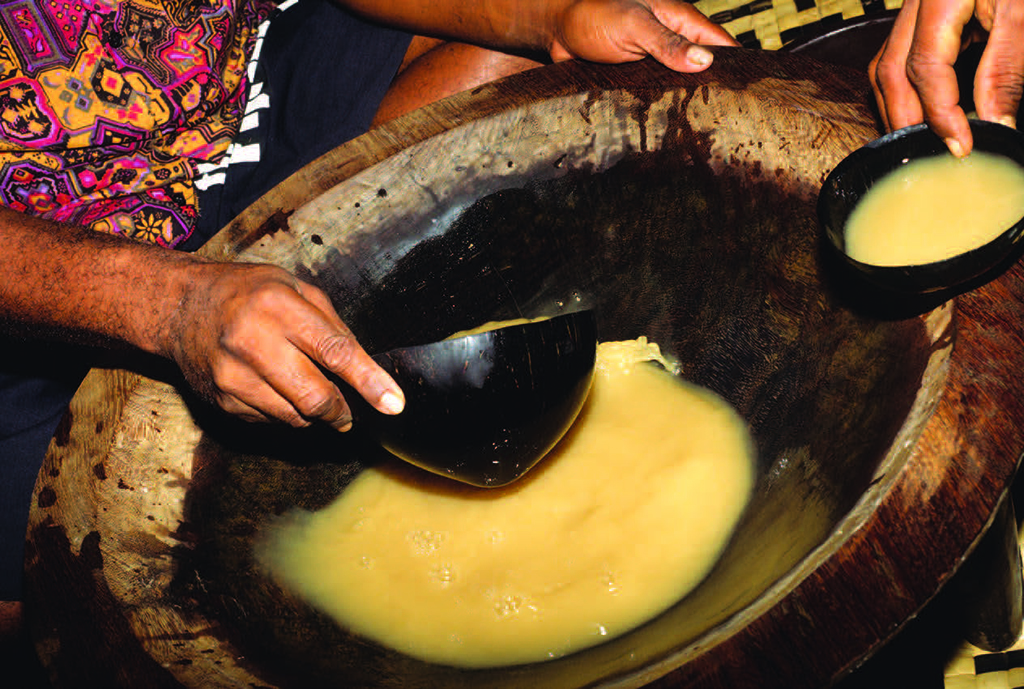 All Out Family Adventure

Sail the World with Scenic Eclipse